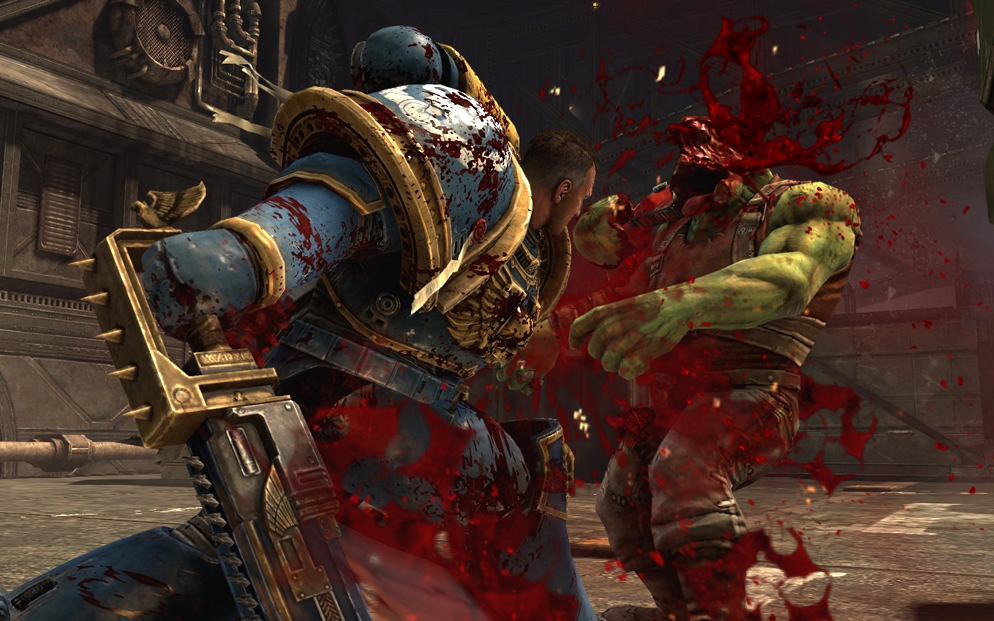 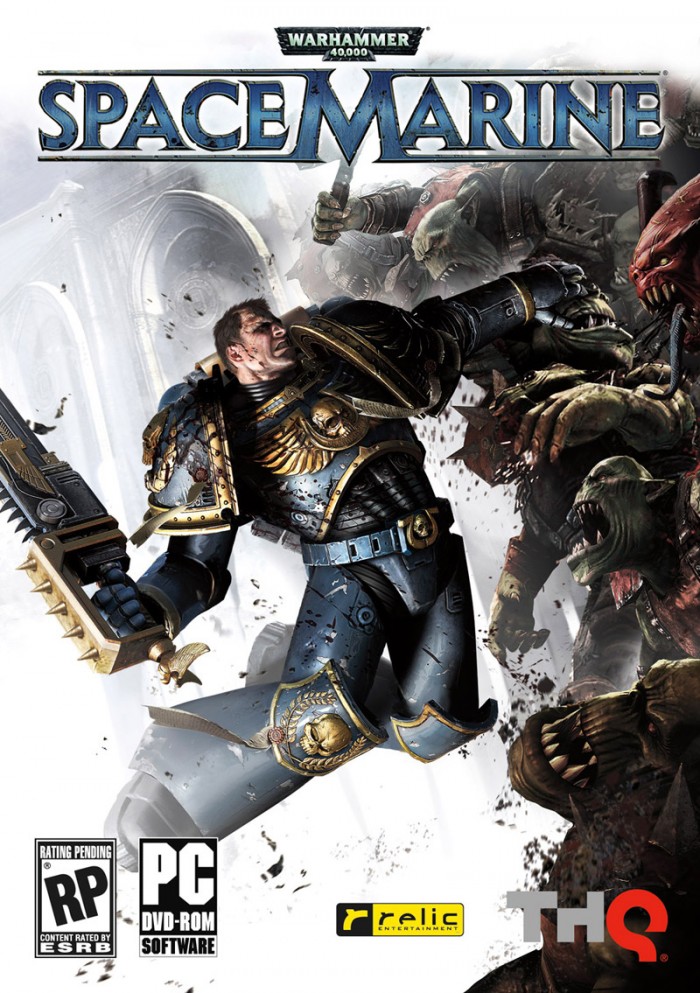 Anyone who knows anything about the Warhammer world knows that the Ultramarines are the near immortal destroyers of Chaos.  When things get too nasty and platoons are getting wiped out you call in a handful of Space Marines and watch them even the odds or overpower the enemy.  So the idea of getting to play ultimate bad asses is exciting and has had me counting the days to release since I saw it at E3.  The only problem I saw offhand was how do you balance a near-unkillable killing machine and make it a challenge worth playing? 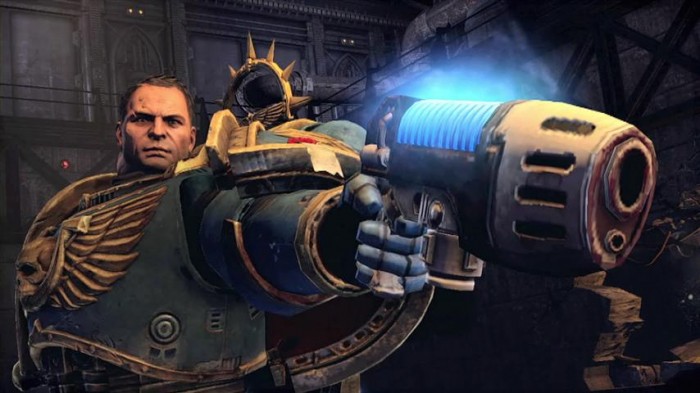 Before getting into the details of gameplay I have to write a bit about the beauty of the game itself.  The cinematics and actual gameplay have the same amazing detail, which creates wonderfully-seamless transitions back and forth between them.  When you add the fact I was playing it via OnLive so I could play with high detail it was almost like playing a movie that I controlled while having no tearing or lag issues.  The gore factor isn’t very high but there is even a certain flow to the blood splatters that not only implies great bodily devastation, but that the Ultramarines are artists when it comes to killing.  When Fury or Execution comes into play the slow motion kills again take on a beauty all their own and show the awesome power of the Space Marine.  The music is great and fits the action and backs the battle force that is tearing through the game.  Part of me wanted this to be a first person game rather than a third person, but watching Titus move and blood splattering his armor you find yourself just removed enough to root for him.  Also when using a scoped weapon you get a bit of first person play so it is the best of both worlds. 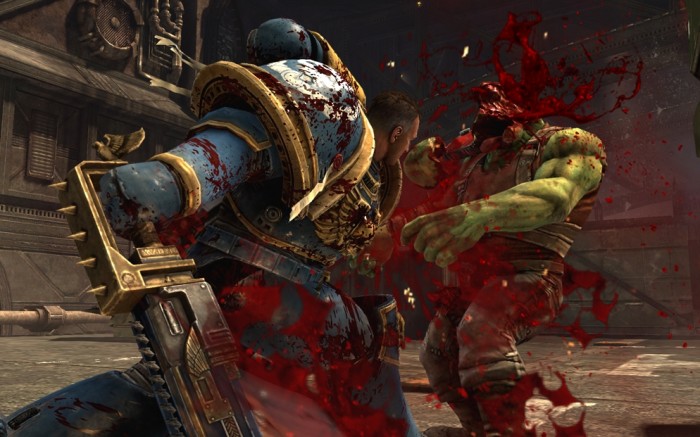 Gameplay-wise Warhammer 40k: Space Marine controls are pretty straight forward for the PC: WASD, weapons assigned to the numbers, and lots of mouse clicking.  That doesn’t mean the game is just a charge in button mashfest.  The Ultramarine is very, very tough but if you charge into battle without strategy and proper weapon choice you will find yourself dying time and time again.  Usually there is a weapons cache right before hitting a particularly rough sections allowing you to decide what would be the best way to approach each enemy onslaught.  Sometimes you had to learn this the hard way, by dying and revisiting the cache for a change up.  Another way of amping up the difficulty, and therefore increasing your need for strategy, is for you to face a difficult boss, then when you face the next boss he has two minions of the previous boss.  The weapons, shield strengths and health recovery increase for you Ultramarine as the game progresses giving you the tools to take down the new enemy challenges though it is still a game of strategy for weapon, technique and fight location. 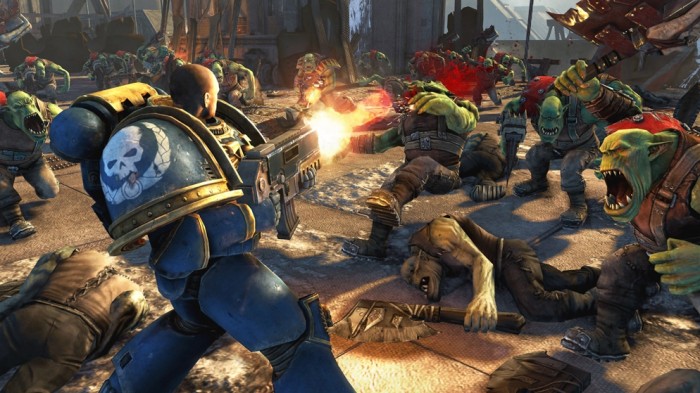 To mix up the fighting style a bit there are a few times during the game that you get a jump pack and a mighty hammer and over the top killing really kicks in!  I almost didn’t want these sections to end though I know that after a while it would get boring from being too easy but while jumping and destroying I felt the true power of the Space Marine as all in his path was smote.  I would welcome an even larger section of jump pack usage in the next game because I just couldn’t get enough of it.  There is another change of fighting style that you can expect that I won’t spoil but is is fun and challenging in it’s own way. 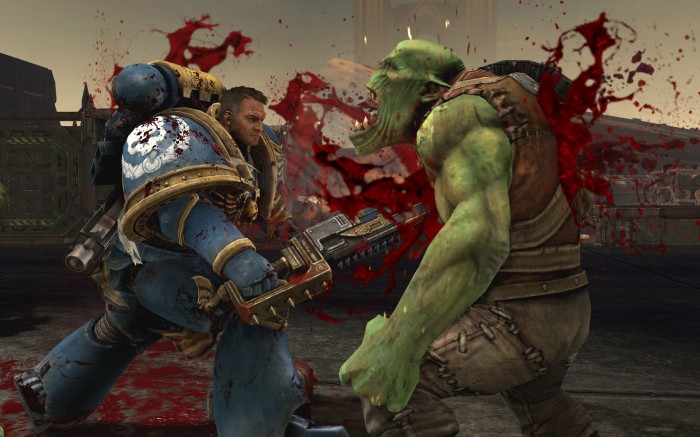 Players can decide for themselves how much they want to commit to the storyline, cutscenes can be skipped and the collectable item in the game is a skull with a recording to push the storyline that can also be skipped.  Personally I highly recommend following the storyline, it is really well written and unfolds nicely to an ending I won’t ruin but definitely surprised me.  The gameplay is long enough that you begin to invest in the characters if you follow the story so when the ending is less Hollywood than the average game I was caught off-guard and really pleased.

If it hasn’t already come through I loved the game, I got caught up in it, lost hours of time and did the “just one more checkpoint” thing when it was time for me to do something not game related.  The developers managed to make a great, strong lead character that grows stronger to match the threat against him yet at the same time has a very humane sense to him, especially for a character that kills thousands of enemies over the course of the game.  If you just want to play the game to hack and slash that can be easily done, or if you just love finishing achievements that can be there for you too and worth your time.  I recommend taking the time to follow the story, invest in the game and get a very rich experience out of it.