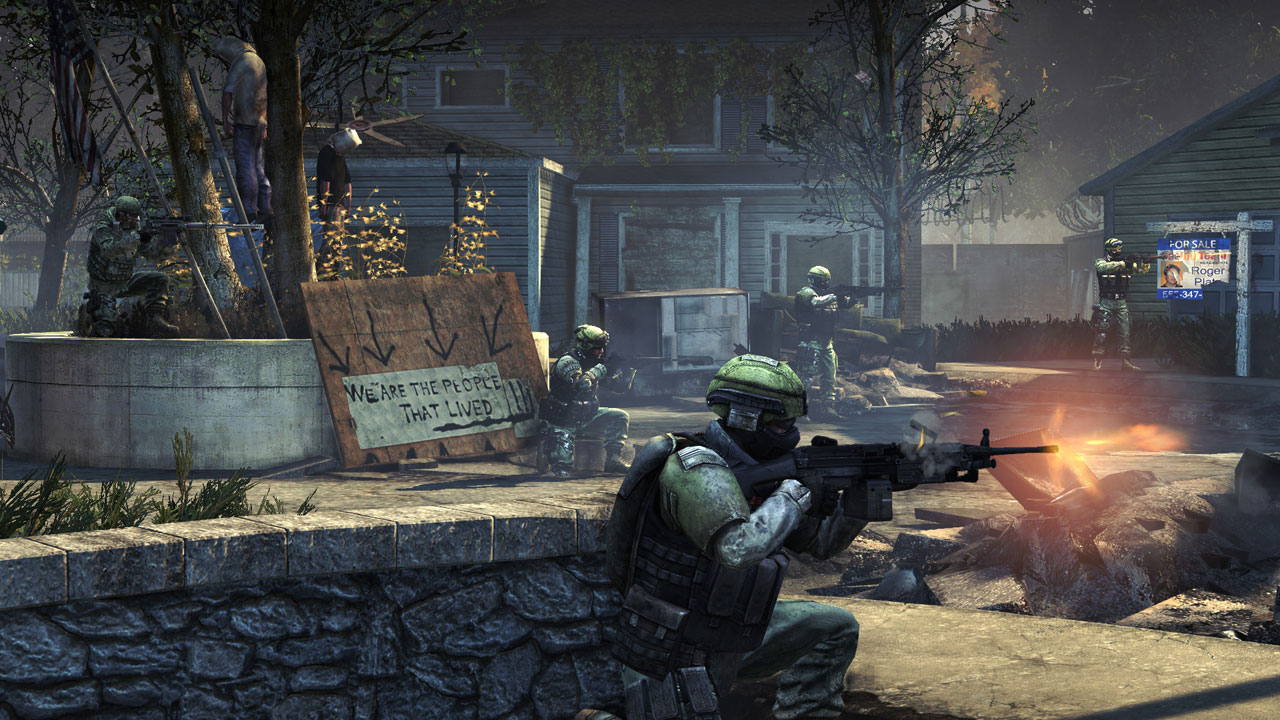 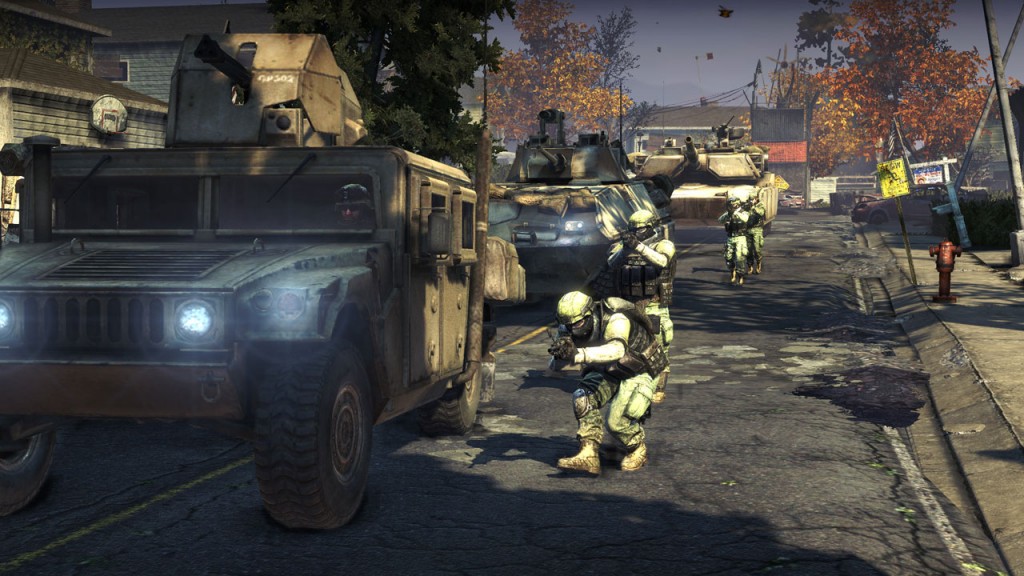 Anger is an energy and I think the anger in the air about four hours after the release of Homefront is still out there across America, just waiting for someone to tap into it.  Twitter and Facebook took a heavy blow as if millions of voices cried out at once and were suddenly silenced.  Ok that is a total exaggeration but for those who lived through those hours they were left with an emptiness, in their game play time and their wallet.  WTF do you mean it is over?  I don’t mean to open old wounds but when mentioning the name Homefront to a gamer there is a very distinct wince associated with it.  Everyone wanted to be out there reliving Red Dawn or at least be a part of this generation’s “Defenders of The Homeland” saga and it was just over too fast.  So when I started talking about the experience of the multiplayer being one of the best out there right now I tend to get skeptical looks.  So here I go explaining why.

First off you get to experience the setting that got you so excited about Homefront in the first place, you get to stand in the shadow of Randy’s Donuts’ iconic giant pastry and blow the enemy right out of boots that shouldn’t be on American soil.  Or you get to move across a ruined neighborhood seeing the damage you have done to these capitalist scum and set up an ambush point inside the local Hooters.  The maps are great in both their realistic settings and their destructive remains of iconic Americana and give a much more engrossing play platform.  The burning debris and fluttering paper which catches your eye as movement and causes you to look one way may cause you to take a hit from another. 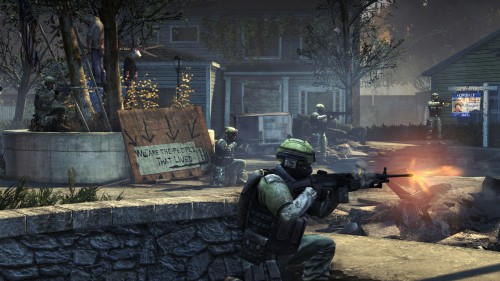 When you start the multiplayer you get a beginning set of weapons and skills to work from and, much like other multiplayer games, you are able to unlock customization of standard classes and weapons and get special items to help you with your mission.  There are some particularly fun remote drones available that can really keep the game interesting and snoop out campers though the remotes have a limited battery life.  These special items such as bazookas, drones, enemy sweeps ectc are earned by building up battle points during a match and the battle points are earned by identifying an enemy location, destroying an enemy or destroying an enemy vehicle.  A very fun and interesting aspect of the multiplayer is the Battle Commander who identifies threats and assigns them as objectives to part of your team, increasing the number of players assigned by how many points they are earning.  So let’s say you got a high level hotshot player who is tearing through your team like single-ply toilet paper, The Battle Commander will put a skull over them, mark their general location on the map to a few players and add skulls and information to more of the team until they hit the maximum of five skulls then your whole team knows where they are, they all want to take him out for an extra bounty on his head and to save your team the headache of his destructive path.  At the same time the more skulls that player earns the more bonuses they get to help defend themselves against the growing threat.  Suddenly your whole team is after one Rambo and drones are covering the ground and sky as well as vehicles like tanks and Humvees.  The whole battlefield is hopping. 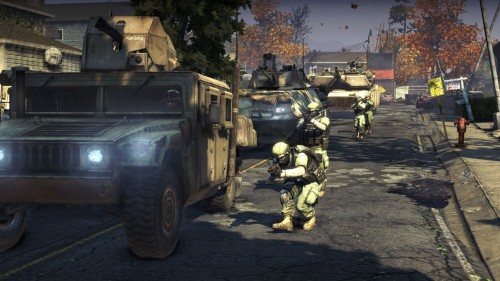 The game is available across platforms on the PC, Steam, XBLA, and PSN as well as my current system of choice, OnLive.  If you have read some of my recent reviews you may have read how impressed I am with the system and it’s incredible versatility.  Homefront Large-Scale Warfare Multiplayer is available as part of their Playpack Bundle which is designed a lot like Netflix streaming. You get over 60 games to choose from to play as much as you want for $10 a month on the PC, their mobile console, tablets and some smart phones.  Just like with Netflix you can pause a game and pick it back up on another platform.  So with Onlive I had the unique opportunity to see how it plays on a console as well as a PC.  On both it performed flawlessly even with the full 32 players.  Yep you read right, two 16 player teams shooting up maps and one another which is usually pretty rough for a console to handle without tearing or lag spikes but this game handles it great without any loss of detail.  Out of dozens of multiplayer games at my disposal right now (most of which are on the Onlive Playpack) this is the one that keeps drawing me back in. 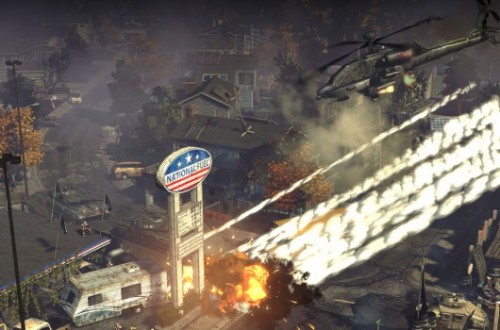 I have been playing multiplayer since, well since there was multiplayer.  There are some that in their hay day were amazing and I still feel nostalgic for even though compared to today’s they wouldn’t hold a candle to them graphically (BF1942 and all it’s mods).  It was because of their gameplay, the epic scope of the maps and play possibilities.  For now I think I have found a home base of multiplayer operation in Homefront LSW and it will take one heck of a good system to knock it out.  Especially since it is just one part of a $9.99 a month package.