The stage is set nicely at the beginning of the game with some decent cutscenes but the game isn’t really about it’s atmosphere. The music matches the scenes well and a storyline is laid down, but most of this feels it is there to set you up to start the fights and grind. You have NPCs to interact with to improve your gear or start a quest or just to chat with but this is less a game of talking and more a game of action.

Gameplay:
Most aspects of the gameplay are tailored well to the PSP controls. The battle sequences are fun, with engaging combo mini games and coup de graces which are really entertaining. They tried not to make it a simple turn-based attack system where you simply choose ‘attack’ and watch things unfold. Players must run around to avoid hits, change targets to create multiple deaths and damage, and time hitting buttons displayed on the screen with attacks to increase the length and damage of your combos. The game was designed for folks who play these games for the fighting and, for the most part, Lord of Arcana doesn’t disappoint. 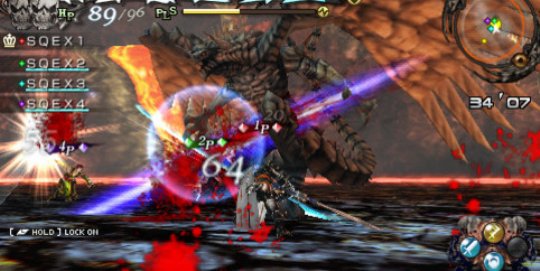 There are only a couple things that can make this grindtastic fighting game a little hard to play and maybe bring it just short of great. The first is camera control. While running around using the left stick you have to also use the buttons right above it to control the camera. So, you may be running around in a battle trying to avoid being hit long enough to take a potion and your camera doesn’t follow your direction changes unless you are running toward a targeted foe. So if your trying to avoid an enemy or pick up something dropped there can be a bit of wayward camera angles, leaving you running blind. The camera system should have been designed to follow your direction and only change when you hit the buttons like most games are, it would instantly improve the gameplay greatly.

A much more minor issue is the target lock system. When you hit the L button it locks onto an enemy but the only way to keep the lock is to keep the L button held down. It gets so that after a while you just hold or hit the L button all the time since you are constantly doing it during battle and the game is mostly designed just to take you from battle to battle. This results in a bit of finger fatigue in your index finger but let’s face it that is going to happen with controller games. The only other gameplay issue would be the timing on the quests. The game saves after quests are completed and some have really tight timing, so it is possible for you to collect items and gain experience only to have it all taken away because you didn’t complete the quest in time and have to go to your last save point. The fact that you can’t just save and quit anytime means you have to plan your real life around your game play instead of the other way around because if you have 10 minutes before your plane boards and you have a 35 minute quest you best wait until you have more time to commit to the game. 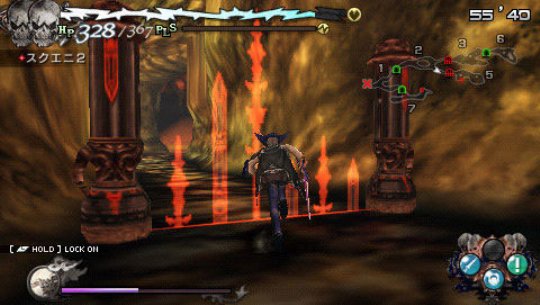 Graphics/Audio:
The graphics are excellent with some very good eye candy for a portable device. I particularly enjoy the blood splatters and flying bodies and parts during coup de graces. The sounds go great along with the action, ringing out crisp and clear. The music fits the gameplay and genre with special kudos going out to the song being used on the character building section of the game and a couple other locations which sounds moody, possibly Gaelic, and made me wish I had it on my MP3 player for mellow times.

Playtime/Cost:
This game is a grinder and so the playtime really comes down to the patience or enjoyment a player has with said grind. I am known for my grinding Zen and I could spend days just grinding away on my favorite quests to level up and improve my gear while not advancing the storyline. I enjoy building and that includes characters so it really is hard to gauge the playtime. Cost-wise, the game runs between $35-$40 with higher prices for special editions and imports. This is the standard price for a new PSP game and for a game with long playtime for grinders this is probably a perfect deal.

Last Call:
It really comes down to whether or not you are a grinder. If you love to grind and don’t mind a few camera issues this is a great game for you, just make sure you have time to finish the quest before you begin.