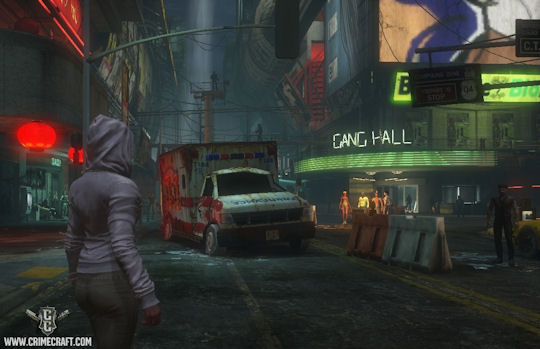 Vogster Entertainment’s CrimeCraft came out in August of 2009 and, while the game itself got generally-positive reviews for it’s instances, it was knocked for its initial business model as well as the fact that players could just park themselves in one spot, join instance after instance and only leave to train up or find a new mission – the storyline got very-easily lost. Thankfully, CrimeCraft has taken on a whole new strategy to bring in players: episodic adventures and artists. Hoping to appeal to gamers who like art from comic books and pop culture, the game now comes out with content-laden episodes featuring guest comic artists. The idea is that the episode is like a television season, each consisting of a series of episodic missions. Each of these missions unfolds over the course of a week until the adventure is completed. Unlike a television series, however, this is premium programming, meaning you have to pay to play past episode one (unless you are a subscriber).

With this new series of episodes, titled ‘BleedOut’, players are focused on finding out exactly what occurred during the financial collapse of the world. This new expansion explains the whole history of the world of CrimeCraft through missions done in present day Sunrise City. The story is told, not only through the missions that you play, but also through the previously-mentioned well-crafted, comic book-like cut-scenes.

Atmosphere:
On the surface, the game’s atmosphere is impressive. There is an excellent cinematic to start things off and the game visuals paint a city in-ruin – decrepit buildings, left-over neon lights, and billboards. There is an oppressive military presence reinforced by unfriendly soldiers at multiple locations with guns held across their chests. There are shadows everywhere and everyone you encounter looks like they could be a danger to you. However, it doesn’t take long to realize the fighting doesn’t take place in the streets but instead in instances ranging over a series of environments. The city is designed mostly to be atmosphere between missions and instances. 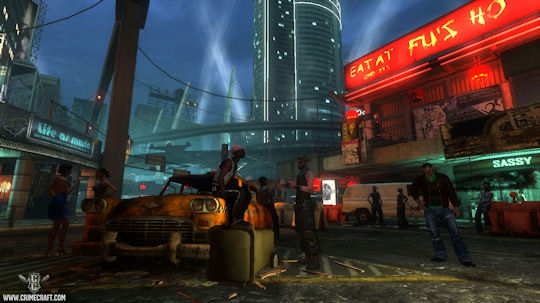 Gameplay:
The game gets stuck between what it is and what it wants to be. It has the potential to be a great MMO experience or a great shooter experience, but in combination it ends up in a ‘jack-of-all trades’ middle ground. The story in cut-scenes and dialogue is good but gets a little lost in the fact that you are just setting yourself up for the next instance. The instances can be a little slow to populate due to people being in the city doing customization or spamming for their own instance choice. The maps are excellent and the weapons are massively diverse due to a ton of customization options. Customization is one of the greatest aspects of this game. No two players have to be identical, everyone has their own play style and have customized weapons and gear to match it. The possible combinations are staggering and probably one of the reasons the game has the following it does. The higher level you get, the more diverse you become.

Controls:
Though mostly standard WASD and mouse-driven, you may want to check button assignments before going into battle so you don’t accidentally drop a grenade on your foot or go to stab someone and just stand there as they shank you instead.

Price:
The game is free to download and play low-end content, and the game’s subscription of $4.99 a month is very reasonable. Where it gets a bit sticky is bonus features that cost real world money can add up real quick. Many of the most competitive and serious players have spent some decent money on their character(s). Also, if you are not a subscriber, BleedOut episodes 2-10 cost you real life money to play. If you see it as buying a new comic issue rather than another part of the same game it helps, but still might sting a bit. 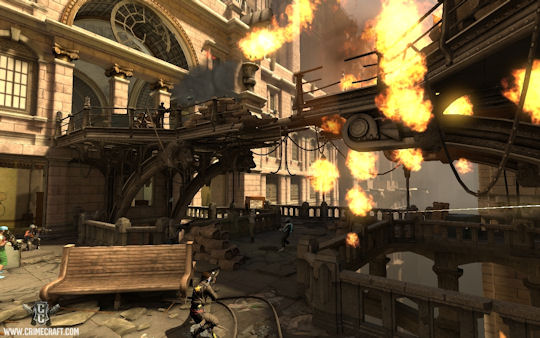 Last Call:
I was very excited to go in and see tons of artistic environments and quests that lead you through a rich storyline. What you get with CrimeCraft: Bleed Out is a decent storyline featuring a very solid instance and weapons system, different from my initial expectations but still a real fun play-through. While the BleedOut episode arc will probably not go down as the best content series in the annals of MMO history, the extra content is a welcome addition, giving players more to do and experience in the game world they love. Hopefully, this is the direction Vogster Entertainment sticks with for CrimeCraft’s future, as it has the potential to not only increase the playerbase but also gives existing players more fun to be had.

*Disclosure: A subscription account with in-game funds was temporarily provided for the purpose of this review. I wish I got to keep it. 😉