I have to admit I haven’t been getting a lot of playtime in with the PSP recently. With all the amazing games coming out on PCs and other systems with new expansions and map packs I can barely keep up with the next game. So when I got a chance to try out Worms: Battle Islands on the PSP it was like a wonderful reunion in which I got a chance to remember why I like the system so much. Luckily for me the reason for the reunion was Worms: Battle Islands which I had a blast with from the first cinematics and right up through the game. Fans of the Worms series should rejoice if they have a chance to play this on the PSP, it has everything you have grown to love about the series and the controls and gameplay work like a charm. 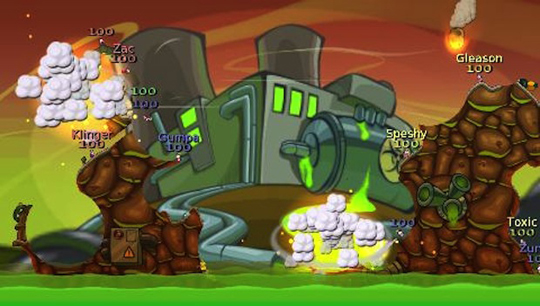 Atmosphere:
The atmosphere for the game is set in the opening cinematics for the game. Like the opening of an 80s television show, it looks like a cross between the A-Team and The Love Boat. The atmosphere continues into the gameplay with the fun music and sound effects Worms players have come to expect. It doesn’t take itself serious and a big part of the fun of the game is the silliness of the atmosphere. Each island chain has it’s own theming and feel so one set of islands will have a tropical feel and all aspects from the voices to the background support the theme, then the next set might be snowy tundra. All this helps support the atmosphere of traveling and conquering different islands in a fun way. 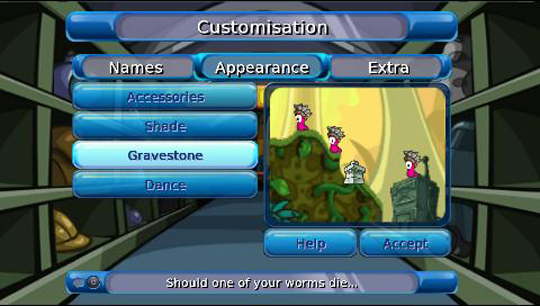 Customization:
One of the favorite aspects of the Worms games is the amount of customization possible. Most of the customization in the game is unlocked by advancing levels or downloading online but player’s are able to change the worms’ masks, hats, dances, voices, forts, and background landscape. There is even a landscape editor in case you want to make your own designs. On each level you can also recover blueprints which can then be used to help build custom weapons which you get to name!

Gameplay:
The campaign mode is set on a series of islands that have smaller ones which represent levels surrounding a larger island. Once you beat and therefore take all the islands around the larger one you are able to assault the boss on the main island. It takes different strategies to beat levels, some take a bit of creative thinking. Some levels will only give you a handful of apparently useless items which when used right allows you to beat the enemy. On standard levels you have a timed menu at the beginning of the level which thought out right enables you to gain an advantage in the level. It requires fast thought and sometimes trial and error which younger players, who just enjoy blowing things up in fun ways may find themselves stuck. Luckily there are multiplayer modes where players can challenge each other online or in a fun ‘pass the game’ mode that supports up to four players. The game also has Time Attack in which you complete the level as fast as possible, Puzzle in which there is a strategy to beating the level and Customization which allows you to create your own weapons, load up your arsenal and blast away at attack dummies and targets. This game has something for everyone from the trigger happy to the cerebral, all presented in a fun, silly way. 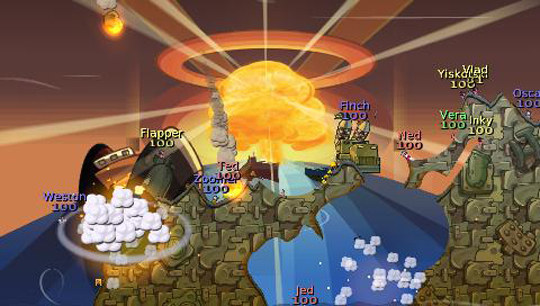 Graphics/Audio:
The graphics are excellent, cartoony as they are intended to be, with lots of explosions and crisp, clean levels. The voices are excellent and there are many styles to choose from as well as many styles performed by the enemies. Some quote presidents, some are designed to sound like military figures, others are pop culture references. All in all the excellent graphics and variety of sound and voice effects add to the enjoyment of the game.

Controls:
The control design and setup works perfectly with the PSP. I got used to the controls really fast and stopped paying attention to the controls and concentrated on the game. The platform works exceptionally well with the game, making it so that the short time in which you have to make decisions doesn’t seem too bad because instead of fumbling for controls you quickly make your moves. 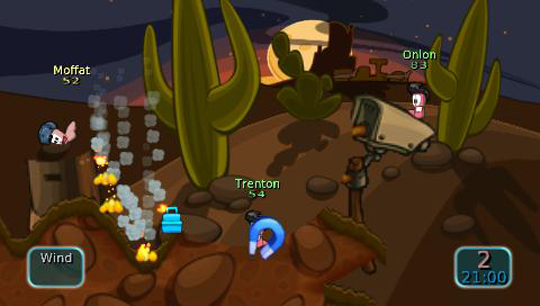 Cost/Playtime:
Worms: Battle Islands cost $24.99 on PSN and has a lot of replayability, customization, and multiplayer options which gives it an unlimited amount of playtime. Each level can be played differently, often with different weapons each time and multiplayer is never the same game twice. At that price with unlimited play and portability letting you take Worms with you wherever you want, this game is a bargain.

Last Call:
This game will be one of my go-to games, one I plan to take on trips or errands where I have to wait. It has one of the most comfortable and intuitive control setups I have played Worms on and the gameplay is fun and challenging. I highly recommend this game, especially if you like a fun and silly time. 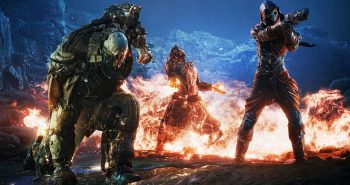 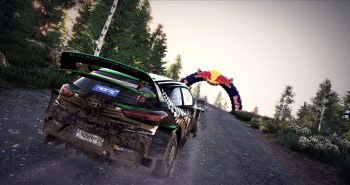