Alien Breed 3: Descent picks up the story of chief engineer Conrad as he fights aliens and Artificial Intelligence that are trying to take over his ship. It starts with a ‘previously on Alien Breed’ collection of comic panels which, though nice looking, are somewhat confusing. There are logs which you can read to try and get a better understanding of the story but this beginning is really one of the defining points of this game: to fully understand the trilogy you need to play it and not jump in at the end. The game is playable and enjoyable without understanding the storyline, but that brings up another aspect of the game: Alien Breed plays just like the previous two episodes, so much so that it feels like the next section of the same game. Since I played the previous two games and enjoyed the gameplay, it was an all-around pleasure to play.

Atmosphere:
The atmosphere of this game is nice and creepy, reminding players of a certain series of alien movies with spidery little ones and large, big-mouthed beasties. You are on your own for the most part in this game just like in the others and there are lots of enemies and tasks to tear through, creating an atmosphere of intensity that seldom lets up. The pretty, crisp graphics and sound support that atmosphere and keep it feeling tense from beginning until end. 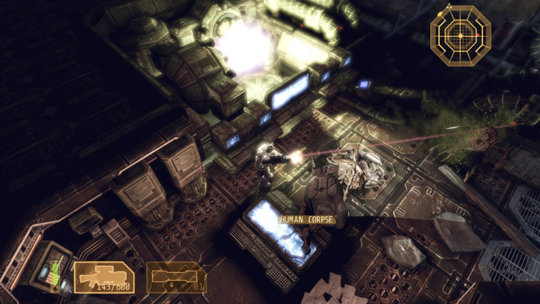 Controller/Keyboard:
The controls on this game are just like the rest of the trilogy, a gamepad controller works great and the keyboard controls are awkward and never seem comfortable. I like the accuracy of the mouse when it comes to shooting but otherwise everything else is incredibly easier with the gamepad.

Gameplay:
The gameplay is enjoyable, though maybe a bit repetitive after playing the other games. You kill your way to an objective, get a new objective assigned back the way you came, the ship falls apart or is sabotaged in some way and you have to find a new way to your next objective. You continue this way going back and forth across the ship encountering wave and wave of baddies. There are a few different sections to mix it up but, in the end, it is mostly the same stuff. If it was the same each time through it might have become uncomfortable to play and let’s face it, a ship can only be so big. 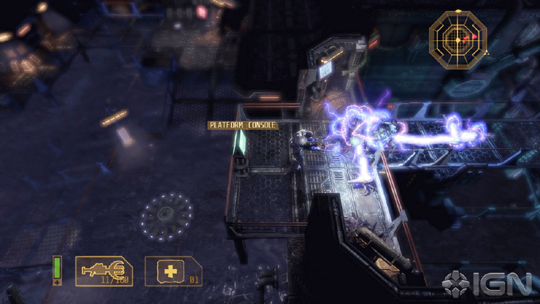 Storyline/Final Boss:
In my opinion if you are playing through this series, you are in it either for the storyline or the gameplay, and the final boss section decides how rewarding you will feel about the series overall. Without giving away any plot secrets, the game did leave a chance for a spin-off, which makes sense if the studio wants to keep it’s options open, but it left the ending feeling with less impact than it should have. As boss fights go, it was much harder getting to the boss than defeating it. I had to fight hard to get to that final moment, the game really pushes you both in fighting strategy and ammo conservation, and I was afraid I might not have enough ammo to get the final boss done. In reality, I could have spent a few more rounds on the way.

Cost/Playtime:
This can be a hard one to answer. Fact is, you can download all three titles for $9.99 each, so that you can play through the whole story and get a decent amount of hours for $30. The last chapter, which felt shorter than the others, ran about 10 hours. That was with going for some achievements but not all, on normal. One play through will probably give you about 30 hours for the whole series, more for playing on hardest settings and achievement hunting. There is also online multiplayer, co-op, free-play and leader boards so for $30 for the series it is a really good deal, if you don’t care much about the story you may even want to go with $9.99 for just the last game and you still get plenty of offline and multiplayer options. 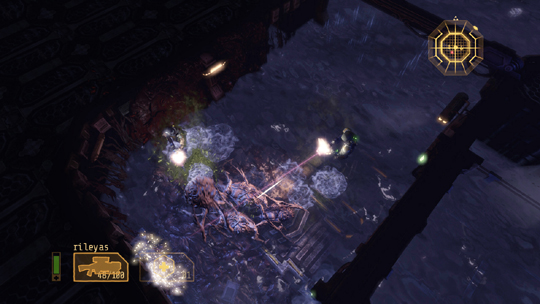 Last Call:
This game was designed to feel like a sequel to the others and to wrap up a storyline. It felt so much like the other games it could have been interchangeable and really it was the story, mostly told in cut scenes, that was the reason for sequels. The story was ok, the play was pretty good and the price was right. Just make sure you own a gamepad for your sanity’s sake (ed.note: On my play-through of the original Alien Breed, I preferred the keyboard, just IMHO).