War-gaming enthusiasts rejoiced when they first heard that Bohemia Interactive was developing a stand-alone expansion to the realistic Armed Assault 2. Dubbed ‘Operation Arrowhead’, this expansion would add a new theatre of operation as well as new factions and units to command. 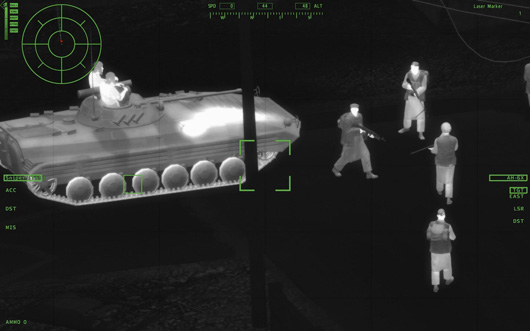 Visually, Operation Arrowhead has definitely been refined over its predecessor, with my gaming rig handling a lot more eye candy for the same frames-per-second. Units are excellently detailed, however human textures still seem a bit… unnatural. Just look at some of your compatriot’s faces and you will see exactly what I mean. Thankfully, the new terrain of Takistan, its capital, and a cool (albeit small-ish) desert map complete with oil derrick all hold tons of replayability. As always, the game audio is incredible, with sound ranging to source being spot-on accurate. See an explosion in the distance, don’t expect the noise of the blast to reach you instantaneously. The new music for Operation Arrowhead follows suit with the original ArmA 2 score, being made up of hard-hitting instrumentals and taiko drums.

The mission editor has been left fairly unchanged. However, with the new units and maps, it too seems to take on new life. The most fun addition to the game is the UH-60 MEV helicopter. This chopper allows for a completely different type of mission in the game: casualty evacuation. After setting my character up in this new chopper, as my mission unfolded, I would receive calls from around the battlefield from AI troops in need. It is up to the pilot and copilot to navigate to the correct grid reference and land. The entire trip to the requested LZ was fraught with danger – AA fire flashing past the cockpit. After successfully touching down at the location, I was shocked to see AI players rushing up to the nose of my chopper to heal and get back into the fight.

Even better, you can put a squad of medics and combat soldiers into your passenger seats, having them disembark and render aid/fire support where needed. The experience was so much fun, I wish Bohemia Interactive would create a full-fledged casevac DLC pack for us. 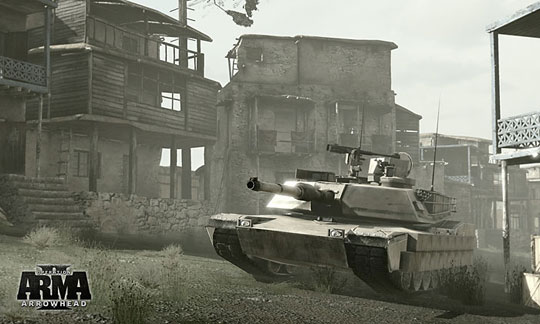 The story campaign mode takes place in the fictional county of Takistan, which has committed hostile actions against its neighbor.In response, the United States launches an invasion of the rogue country to remove its leadership. One major complaint regarding the original ArmA 2’s campaign was that it was VERY difficult. Movement in the ArmA series has always been a little clunky as players are kept within the bounds of realistic movement for a human being – almost rigidly so. This, coupled with overly-intelligent enemy AI and a slew of gameplay bugs made for an ‘iffy’ experience. Thankfully, the campaign in Operation Arrowhead is very much improved, with no bugs encountered and a brand-new difficulty setting for novice players.

One feature which I found myself enamored by was the implementation of infra-red imaging systems like FLIR (Forward-Looking Infra-Red). While some games have attempted to recreate this kind of system, Operation Arrowhead is the first game which has realistically-done so. In fact, watching scenes of carnage unfold through the sights of this kind of system brings an eerie memory of FLIR pod footage from actual war videos.

For fun, I whipped up a mission in the editor of a fictional US assault into an enemy country. Listen for details such as the ‘GO’ alarm sounding and the rush of choppers and vehicles ‘across the berm’ into enemy territory. You can do all this and more in Bohemia Interactive’s included mission editor. This title is worth the entire price of admission for this feature alone – not to mention all the rest of the awesome entertainment that ArmA 2: Operation Arrowhead will provide.