PRESENTATION
Where the UFC series has always shined is in the presentation. Yukes and THQ set their sights on making Undisputed 2010 the ultimate MMA experience. The main menu system explodes with UFC flavor and is a bit easier to navigate compared to last year’s title. The game’s presentation is top notch and really makes the player feel like they are watching a UFC event on TV. The lead-ins are presented in a TV style format down to the actual theme music for the UFC. The fighter introductions are exactly like you would see when attending a UFC event and the in between round cut scenes are well presented. 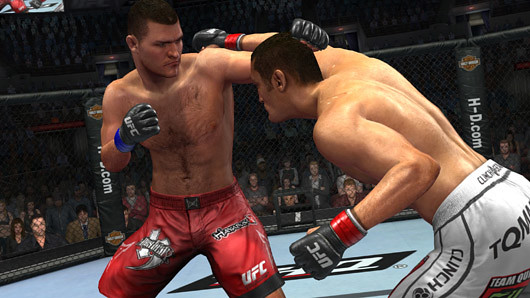 The only thing that raised issues with the overall presentation of the game were the horrible load times. At times it took a solid one to two minutes just to get to into a fight!. This really slowed the game down as opposed to hopping right into the action, you are made to sit and watch the spinning loading symbol – very exciting. That being said, the presentation is still the highlight of UFC Undisputed 2010.

GAMEPLAY
The developers of UFC Undisputed 2010 set out to overhaul the gameplay set forth in the previous title quite a bit. Just in the actual fights alone you have a ton of new submissions, clinches, not to mention the ability to pound your opponent against the cage. Each fighter you choose to play with has their own unique style of fighting and they give you a ton of fighters to choose from. The roster for Undisputed 2010 has one hundred fighters to choose from in all weight classes. Stars such as Brock Lesnar and Kimbo Slice make appearances as well as a lot of not so well-known fighters.

With as much overhaul that the game mechanics were given, there are some glaring issues to contend with. The new flash knockout system makes it way too easy to spam your special punches or kicks on your opponent. This made the game rather stale, much like the old Blanka low-kick-cheat in Street Fighter II. There were times in my play session where I only used one punch the entire time and still ended up winning the match. After several matches, it became very clear that the game can get plain stale if you stick to only the exhibition mode.

The other glaring issue is the submission system. While great steps were taken in adding more submissions and tweaking the level of difficulty, it still felt way too hard to make your opponent tap out. It seemed like almost every time a submission was attempted, the opponent would roll out of it with little to no problem. While UFC fans enjoy a good slug-fest, more importance needs to be placed on the grappling game. Without the focus on submissions and grappling, all you have is another boxing title.

The career mode in the original UFC Undisputed was fairly robust, with tons of options on how you wanted your career to progress. What the career mode was lacking in the first game was story. You were never told why or how you got into the UFC. It was pretty much ‘Here is your training, now get to it’. The good news is that in UFC Undisputed 2010 the career mode has been revamped. You start off as an unknown fighter in the bush leagues, eventually making your way to the WFA as a pro. Once you get some wins under your belt, Dana White shows up and offers you a contract with the UFC. It’s not all groupies and parties going forward though – lose a few matches and you may be finding yourself booted to the undercard or worse… 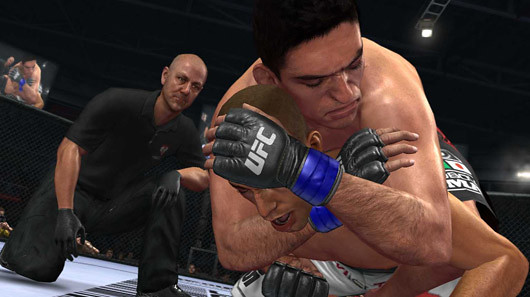 Career mode sets you up with master UFC trainer, Mark Laimon, but in all reality he is pretty much useless (ed. note: only in the game – no offense, real-life Mark L.). You can go to get some advice from your trainer, but it is nothing more than ‘Go get em tiger!’. More development could have been placed on the coaching system to offer a better, more useful experience. As you your career develops, you will need to train for each match and keep your stats up. This was the worst part of career mode as you need to spend some time making sure your stats do not decrease with the new degradation system. You have the option of training, sparring, joining a fight camp to learn new moves, or resting for that week. For the training and sparring session I found myself just mashing buttons or having it done ‘by the system’. Before each fight you have up to 10 weeks of training and it is simply just too much wasted-time that can leave the player frustrated. Joining fight camps to learn news moves is an interesting spin on getting your fighter some new ways to down your opponent. The problem with the system is it results in mini-games that are hampered by the previously-mentioned, awful load times. Each time you go to a fight camp it turns into a hit the bag or sparring session. The more objectives you complete the better chance you have of learning that new move.

A bigger emphasis was placed on sponsors this year – as you move up in the ranks, you catch the eye of various sponsors. These sponsors can unlock new clothes for your fighter and increase the amount of cred you earn each match. This added to the already robust creation engine. Another overhauled feature in career mode is fan exposure. As you do certain things, like sparring sessions or picking the winners of PPV’s, you can earn fan cred to become a rising star. The best use of this was post-fight interviews following various matches. Depending on what response tree you chose, it would either lower or raise your fan level. This was a nice touch but there was really no end reward for this system. In the end, career mode had some nice changes to it but still fell flat with the roadblocks that were thrown into the game mode.

There are other game modes in UFC Undisputed 2010, like tournament mode – where you can import your fighter, and a mode where you can relive some of the most pivotal UFC matches. This mode is a nice idea but, again, falls flat due to the gameplay. Each scenario has great presentation with actual video giving you background on the event. You are presented with several objectives to complete and missing just one of them will result in a ring girl telling you that you failed. After several attempts it was just not worth continuing on due to the gameplay issues and horrid load times.

As far as online modes go, UFC Undisputed 2010 really steps up the game by introducing a community. In last year’s version it was all about going online to duke it out. That holds true in the 2010 edition, however you now have access to stat rankings and team camps. In the world of MMA, team camps are important as fighters train together and back each other up. The same can be said for the team camps option in this game. Players and their friends can set up a team camp and not only train with each other but they can up their rankings as well. Kudos to the developers for adding a sense of community to the game!

GRAPHICS AND SOUNDS
The graphics in Undisputed 2010 were given a very nice overhaul. Fighters look top-notch and really resemble their real-world counterparts. From the crazy tattoos and blood flowing from their noses, everything was nice to the eyes. The biggest problem, visually, is that there needed to be more activity in the crowd. Also, it would have been nice to see the fighter’s unique corner men. The corner men in UFC Undisputed 2010 were the same for each fighter. In MMA, corner men are almost as well known as the fighters themselves! There were not any glaring graphics issues that I came across other than some funny ragdoll moments when opponents were knocked out. 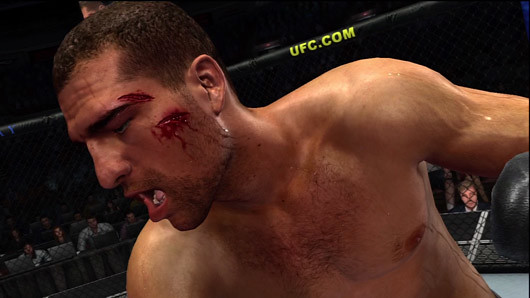 The sound in Undisputed 2010 was top-notch. From the blaring new metal menu intros to the ambient crowd noises. Everything was really well done in the audio category, including (drumroll please…) the announcers! The most common complaint in sports games is that the announcers seem to say the same thing over and over again. I found that Mike Goldberg and Joe Rogan did an outstanding job recording the commentary for this game. It really added to the TV-style presentation and put a nice little ribbon on the package.

FINAL THOUGHTS
UFC Undisputed 2010 is not perfect by any means but it is a good rental for you Shogunites to try out. Where players will really have fun with this game is if they sign up with some friends in the Team Camp section. Putting the gameplay issues aside, UFC Undisputed 2010 offers great presentation and makes it to the end of the third round.