The first Battlefield: Bad Company, followed Bravo Company (a unit made up of mostly misfit soldiers) as they fought their way through many fields of battle in a fictional war between the Russian Federation and the United States. Just when the unit thinks they will be sent home, they get re-instated to active duty and sent off to fight again in Bad Company 2, the latest game from EA DICE.

In a very interesting turn and slight nod to the World War II shooters out there, some of which were created by EA DICE themselves, Bad Company 2 starts off with the player in a secret Allied unit sent into the Pacific Theatre of war to retrieve an operative from Japanese clutches. What happens directly sets up the story of Bad Company 2, some fifty odd years later. In fact, the player is presented will all sorts of gimmicky gameplay elements throughout the game. 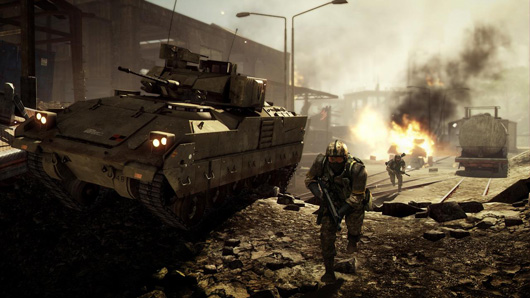 You will jump from the previously-mentioned World War II portions to on-rails segments where you man a turret or even get behind the wheel of an M1A1 main battle tank. The gameplay keeps the player moving and guessing as to what happens next in the story and never ceases to be full of an 80’s style of action found in those great popcorn flicks staring guys like Arnold and Sly. Thankfully, Bad Company 2’s dialogue is light-year’s funnier than what was featured in those seminal classic flicks, with the game even picking on Predator and a plethora of other pieces of pop culture. In fact, one of the bad guy types in the game looks just like Jesse ‘The Body’ Ventura as Blain in Predator.

Just like in the original, Bad Company 2 features a ton of weapon types for you to utilize, usually picked from the bodies of your foes. Weapon effects are well-visualized and give a real sense of ‘power’ in what you are firing at the time. 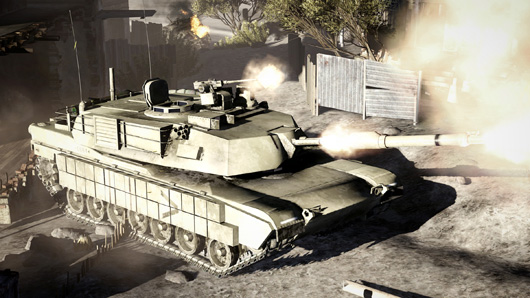 Visually, the game is quite detailed (even stunning on the PC version). However, on our Xbox 360 version of the game, it suffers from the usual aliasing issues. Other than the ‘jaggies’, however, the game looks very pretty and features some very well-done level design with multiple paths to explore.

Game audio is nicely composed, both in terms of soundtrack and ambient effects, while the voice work is stellar. I would seriously consider watching a machinima-style web series featuring the characters of Bravo Company; Irreverent, over-the-top humor mixed with 80’s action flick bravado is the order of the day here. Also, the score is composed by Mikael Karlsson and has a very… Indiana Jones-style to it. I would say a John Williams style but, given the subject matter, my first comparison holds more true. Either way, Karlsson should be proud as it is a great score for the adventure-shooter.

The only real area where Bad Company 2 disappoints is that, while the on-rails segments keep things interesting, they also provide some very frustrating moments as the game will not save every step of the way and a death could mean having to start over at the beginning of the sequence. Maybe I am just a spoiled PC-gamer, but it is frustrating, nevertheless. 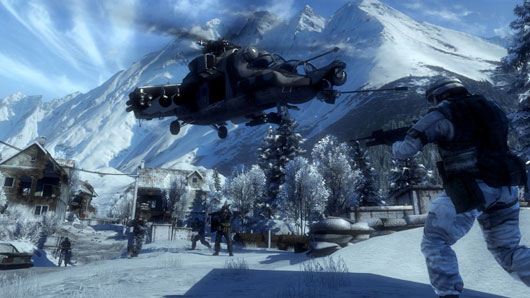 While I dealt mainly with the game’s single-player element, it is quite clear that the multiplayer component of the game is going to extend the replayability considerably. There are several multiplayer game modes such as ‘Rush’ and ‘Conquest’, and EA is promoting these by releasing DLC packs featuring maps every few months. Personally, I found the single-player experience fun and compelling, and it has actually stirred me to begin playing the multiplayer content a lot more than before.

Overall, Battlefield: Bad Company 2 is an over-the-top, irreverent thrill-ride of a first-person shooter which is begging to be played, even despite its minor issues.

*DISCLOSURE: EA DICE gave GamingShogun.com a copy for the purposes of this review.