James Cameron’s AVATAR is a new film which tells the story of mankind’s first real conflict with the tribal natives, known as the Na’vi, of a distant world called ‘Pandora’. The movie is breathtaking, especially when seen in IMAX 3D. It features an alien world fraught with danger, cool-looking war machines, spiritual natives, tales of love and wrath – everything that makes a movie good. It was only natural that a video game based on this film would be released. Enter: James Cameron’s AVATAR: The Video Game. That long thing is actually the game’s title. 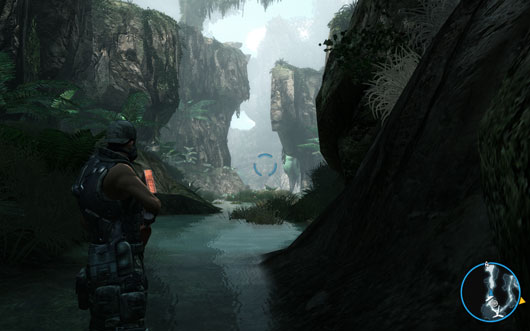 So let’s begin with what works…

You start off the game as a marine corps signal specialist who has joined the avatar program to make use of your special skills in helping your people get the rare element, ‘unobtanium’, off of Pandora. The game is basically a third-person shooter set in a semi-open world. You can hop from location to location completing in-zone quests and other tasks to gain experience points which unlock new sets of skills, weapons, and armor. There are a huge number of weapon and armor configurations to unlock, and you really get a sense of power with each new tier you equip.

The visuals of Pandora as seen in the game are incredible when it comes to the environments. They look really close to how it is portrayed in the film and when night time rolls around the jungles of Pandora walk a fine line between beautiful and eerie. The creatures are also taken right from the movie and, in their own right, very cool. Humanoids, however, are not nearly as crisp or detailed. 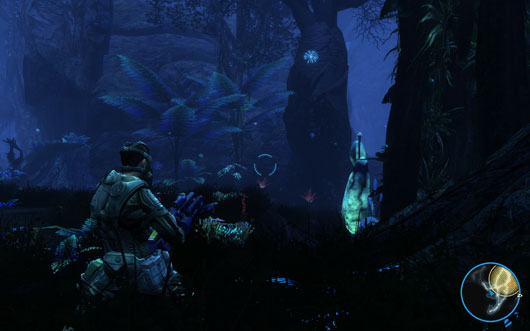 Multiplayer does offer some fun, especially in team deathmatch scenarious as the AI of the game’s singleplayer enemies is not in play anymore. Taking on a player-controlled Na’vi is far more harrowing a task in this mode. Also, its alien environment makes for a very different setting than you are probably used to in your multiplayer gaming.

Another great aspect of the game is its use of 3D technology. Like the movie, this really elevates the material to another level. In other words, it will help you overlook the game’s shortcomings so I highly-recommend it if you have already made the purchase. The game supports most of the video game 3D formats available including NVIDIA’s 3D Vision. 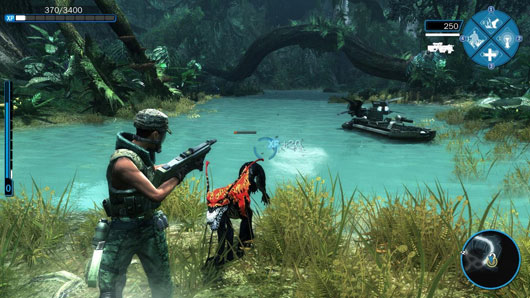 This marks the end of the ‘good’ portion of our tour…

AVATAR is a choppy mess of source material. It’s like 20th Century Fox was SO paranoid about certain plot points becoming leaked that they withheld this information from the game developers. The result: Na’vi who move and play just like the human characters, albeit with a different set of weapons and jump animation. Oh, they are also larger than the human characters. While this keeps with the movie, when coupled with their clunky movement it just makes them larger targets. The Na’vi of the film are graceful and agile, almost feline. The Na’vi of the game are simply cannon fodder unless you make use of the game’s poor enemy AI. Perhaps Ubisoft Montreal is making some sort of political statement that people are inherently stupid? I think not, as you will find while playing as a human that the Na’vi are also notorious for standing in the open, slowly firing inaccurate arrows at you. 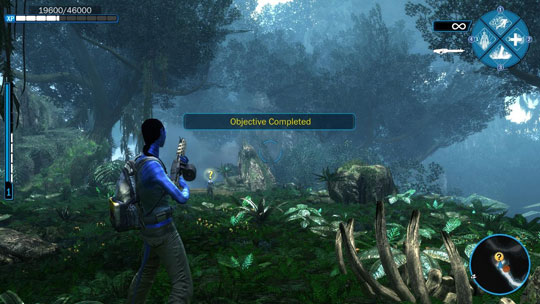 There is also a rather large hole in the game with regards to how the Na’vi (again, I am trying not to spoil anything for you folks who haven’t seen the movie yet – its amazing, by the way) ‘interface’ with their world. It’s is a huge part of the film and is just missing in the game. This directly reflects in the game’s sketchy plot which tries to patch up these missing details as best as it can. We are left wondering several times, why are the Na’vi so attached to the ‘Tree of Souls’? Because of the previously-mentioned, missing detail it just does not make sense and is not explained in the game at all. The story also moves too quickly from the start of the game to the choice you have to make as far as who to ally yourselves with. You barely have any time to really figure out what’s happening before being forced into the choice. Aside from these issues, the game’s story is just too disjointed and badly put together for its own good. The best time to be had is just saying ‘screw the objectives’ and roll around the jungle in a human vehicle laying waste to the various inhabitants with your machine gun. 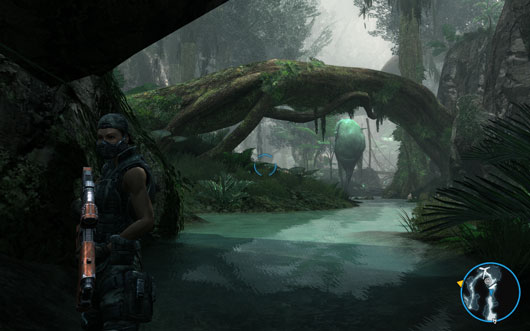 Each race gets its own set of skills such as stealth and sonic repulsors to scare of nearby animal life. The problem with these skills is that they are not featured anywhere in the movie, and with good reason. At what point in the film does a Na’vi activate Predator-style camouflage? Or when does Sam Worthington’s AVATAR in the film activate his sonic repulsor to scare off the gigantic cat near the beginning of his journey, which sets everything in motion? Never, that’s when! These technologies are not in keeping with the film whatsoever and I have a hard time believing that James Cameron tied his name to such an anti-detail. If the Na’vi possessed Predator-style camoflage, it would have completely changed the flow of the film. If the humans could just set of sonic repulsor weapons, they would have slaughtered every wave of the film’s big ‘twist’ during its final battle sequence! Why, Ubisoft Monteal, why?!?

Another area which the game fails on the PC is flight. Whether it is a human helicopter or a Na’vi Ikran, the controls are just atrocious. It is all done via the keyboard and lacks a smooth translation of keystrokes. This means you will spend a lot of time smacking your bird into the side of a floating mountain and crashing your helicopter into rock outcroppings. It’s better to stay grounded, you will have a lot less frustration there. 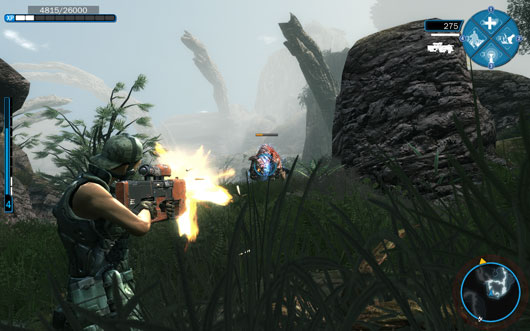 Overall, James Cameron’s AVATAR: The Video game is only worth your time when it hits the $19.99, discounted price point, or whenever you pick up that incredible 120Hz LCD monitor you have been eyeballing. The game is very pretty and can offer some entertainment in short, controlled-bursts – However, between its lack of vital film details and spotty controls, it just is not worth $60 smackers.