Design and Quality
The Kinzu Optical Gaming Mouse is a very standard looking wired mouse. It has a three button design (left, middle wheel, and right) with the SteelSeries logo on the palm rest. The slip-resistant coating on the mouse feels comfortable while in your hand and will actually do its job of keeping the mouse from slipping out from under you. The Kinzu’s design is also ambidextrous for the lefties out there and is very light weight to keep fatigue down in those marathon gaming sessions. The Kinzu operates with 9375 Frames Per Second at a movement speed of 50 Inches Per Second. The Kinzu is very smooth and reduces all jitter that you would find in mice that are not so gamer-centric.

I did run into two negatives with respect to the actual design of the Kinzu mouse. The first being that it only has three buttons. For my first person shooter testing last week, that was no big deal, since I never used the extra buttons of my previouse mice to play those games. When playing an MMO like World of Warcraft, however, I usually assign various actions to my fourth and fifth mouse buttons. The second negative I found is that the Kinzu Optical Gaming Mouse is very small. I play using a ‘palm grip’ on my mouse, and found that the mouse felt a bit too small in my hands. For those of you that have big hands and use a ‘claw hold’ on your mouse, this should be no problem for you.

Installation
The Kinzu Optical Gaming Mouse is very simple to install and is designed this way so you can take it to LAN parties without having to worry about complex install processes. The Kinzu can be a plug and play mouse, ready within seconds after you plug it into an available USB port. The second option for the Kinzu is to download the available software from SteelSeries. This allows you to set up to three profiles for the mouse as well as set its configuration to fit your needs. 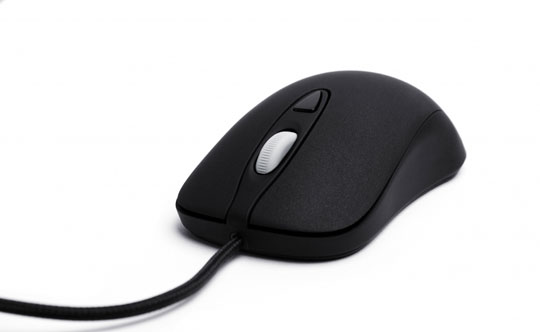 Usage
In my week of testing the Kinzu Optical Mouse, I ran it through my standard gaming tests and used it in two completely different style of games – World of Warcraft and Team Fortress 2. I created two profiles for myself using the very simple-to-use SteelSeries software, one for my MMO games and the other for my FPS games. I could turn up the acceleration of the mouse for my FPS profile to keep the enemy in my sites, then switch profiles with the acceleration turned down to play my MMOs.

As previously-mentioned, in regards to playing MMOs, I did miss the fourth and fifth buttons tremendously. For MMO playing, the more buttons you have means the more you can bind to them and the less you need to drag your mouse around to activate a spell or equip an item. Other than missing those buttons, the Kinzu performed wonderfully in terms of sensitivity and movement. There was no jitter in the Kinzu’s movement and it was very accurate during my gameplay. Now, we all know that MMOs are not the benchmark for the performance of these mice, so let’s take a look on how the Kinzu helped me in my Team Fortress 2 experience.

Ah, Team Fortress 2… Tell me, why can’t I quit you?!? This was the perfect week for me to test the Kinzu in Team Fortress 2, what with the war going on between the Demomen and the Soldiers of the world. I chose my side (Soldiers FTW) and logged in, armed with the new Kinzu mouse. This, for me, is where the Kinzu was right at hime. The extra buttons I have used on other mice were not missed here. The accuracy of the Kinzu was fantastic and it allowed for some very smooth gameplay. The lightweight design reduced any type of hand cramping or fatigue that I normally experience whenever I play for too long. The Kinzu also showed its durability by surviving my temper tantrums during the week…

Conclusion
Steelseries has developed a very solid entry-level gaming mouse for those of us who do not have truck loads of disposable income. The Kinzu Optical Gaming Mouse is a very lightweight and durable mouse with incredible accuracy and smoothness for a much smaller price tag then it’s bigger brother, the Xai. The Kinzu will feel good in your hands for those marathon gaming sessions – although for me it could have been a tad bigger. The Kinzu’s easy installation also makes it perfect to take with you to a LAN game with your buddies or a full-on gaming competition. The Kinzu Optical Gaming Mouse retails for $34.99 and is available now.

*SteelSeries sent GamingShogun.com one Kinzu to test over the course of several weeks.