It&#8217;s no secret that the FIFA soccer games are the titles I play the most. As a long time Red Devils fan I was very excited to be given the chance to review FIFA 10 thanks to both EA Sports and EA Vancouver.

FIFA 10 set its goals high this year, intending to be the single highest-rated football game on the market. One of the major new game mechanics in FIFA 10 is the 360-degree dribbling system. No longer does the ball feel as if it is glued to your players. If you want to kick the ball between each foot to get past an opponent there is no problem in doing so. The 360 dribbling system is fantastic and really allows for fluid and realistic-looking gameplay. In one match I was able to take a long ball pass, kick it to my off foot, and then change directions on the fly to get around a defender. This was never possible in any football game I played before now. 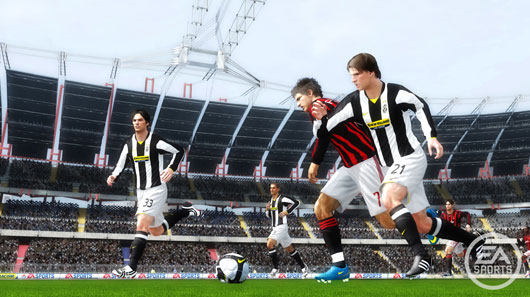 EA Vancouver has also upped the defense in FIFA 10. Defenders will no longer just sit back and wait for the ball to come their way. They will charge you into the sidelines using their muscle to either steal the ball away from you or simply knock you to the ground. The goalies even got enhanced this year and are more than willing to charge out for the ball, hoping not to hit a striker – resulting in a red card and being sent to the locker room. Scoring is definitely more difficult as the goalies are obviously more reactive in their defense. While FIFA 09 made it fairly easy to just run in and score, FIFA 10 forces you into making strategy. Controls are pretty easy to learn in and follow the same basic layout as FIFA 09’s control system. The biggest change to the controls in FIFA 10 is the addition of the left trigger with the right stick in order to do skill moves. You can also use both triggers and the left stick to do some skilled dribbling like nutmegs. I found it a little difficult to pull this off during a fast paced match but as I played more I got used to it.

FIFA 10 sees the return of many gameplay modes as well as the addition of a few new ones. The Manager Mode has been through a complete overhaul, making it a much more realistic experience. This mode is for the truly hardcore as you handle everything from transfers to your budget. There is so much information at your fingertips that you could literally spend hours going through information and playing out your season. One negative side of the Manager mode is the &#8220;assistant manager&#8221;. I found this virtual assistant to be a general nuisance who would never really put the right players in the lineup for me or do what it was meant to do. I ended up turning it off as I am a power hungry manager who wants total control of my franchise. After all, if I am actually playing for Manchester United in this game then I want to make sure I am not riding the bench. 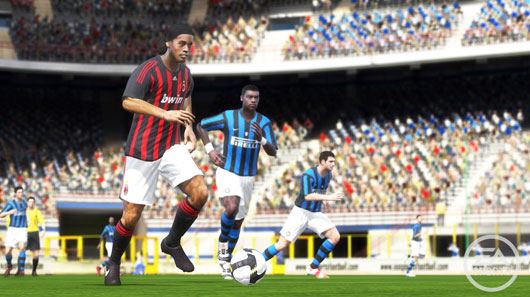 Virtual Pro mode, known in FIFA 09 as &#8220;Be A Pro&#8221;, adds an RPG-like element to the game. Coupled with EA&#8217;s GameFace technology you can upload a picture of yourself at their website and download it directly to the game. My dream of playing for my football club has actually come true, albeit in digital form. You are able to use your Virtual Pro in any of the modes and as you play your stats will increase. Score an awesome header in a game and you will unlock different stat upgrades for your character. Even just messing around in the all new practice arena can unlock new kit options or celebrations. This is a fantastic way to keep people playing the game. Your football star can head out in ANY of the modes to make his name known. A big kudos to the FIFA team for adding this into the game.

One of the other new modes is the practice arena – a great mode to practice and hone your skills. You can set up all manner of situations to play in, including the all new custom set piece mechanic. Set pieces are one of the most important things in football. Creating your perfect set piece and then sending it to any team or mode you wish is a great new feature. If only I was better at actually getting the ball in the net.

Live Season mode is back and EA has definitely made it a much more fun experience. Live Season matches NBS 10&#8217;s Dynamic DNA where you can play each game of the real season. Setup as DLC for FIFA 10 you can pick a nice offering of leagues to follow or buy a complete pack to do all of them. The Live Season is a neat way to re-write history and track your progress as your favorite leagues and teams complete their real world quests. A great job to the FIFA team for bringing this back as it was one of my favorite things from last year. 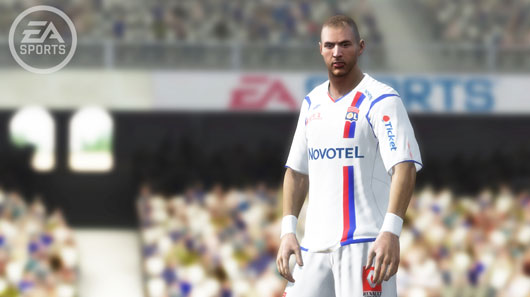 Multiplayer is back as the driving force in FIFA 10 gameplay. You can set up leagues with your friends or play in a 10v10 club championship. Connecting was easy and I had no issues matching up against other gamers for some football fun. I don&#8217;t do a whole lot of multiplayer gaming but FIFA 10 was great, and would be even for a casual player. If only people wouldn&#8217;t quit right away when they get scored on… Grrr, Arghh!

Visually, FIFA 10 still looks like it needs a big graphics overhaul. Even with the increase in player detail this year, it still doesn’t quite look how it should. However, what really shines in FIFA 10’s graphics is the realism of its stadiums. If you are playing a low-rank team one week you will find the stands a little empty just like in the real world. One aspect which definitely needs improving is the game’s weather effects – it really needs to be a lot more dynamic. I know it rains a lot in England but come on – every match?

FIFA 10’s audio is exceptional with team chants and players barking out things on the field. Andy Grey and Martin Tyler are back for this year with a new script. I did hear some lines taken from last year’s game but otherwise it’s new stuff. Hopefully we will see additional commentators in the future as DLC like they did in FIFA 09.

To wrap it up, FIFA 10 is the complete football experience for the 2010 season. Between the realism of the 360-degree dribbling system and the way EA Vancouver immerses you in the experience puts the FIFA series on a pedestal above its competitors.