You may recall the splash the SAW Haunted Attraction made during last year’s Halloween season. Well, that maze was designed by Jeff Schiefelbein and his IMAGINATION Design Studios. This year, they have re-branded the event to be now forever known as Sinister Pointe and along with this new name comes two new haunted mazes to experience: Interactive Fear and Silent Hill (based on the Konami video game franchise). Not only that, but Sinister Pointe also offers the Slaughter Yard scare zone in front of the ticket booth to keep victims terrified while they wander about.

Our tour of Sinister Pointe took place on Thursday, October 8th when they were staffed by what Jeff Schiefelbein himself would call a ‘skeleton crew’. I mention this as what would transpire when we entered the mazes was nothing short of awesome… 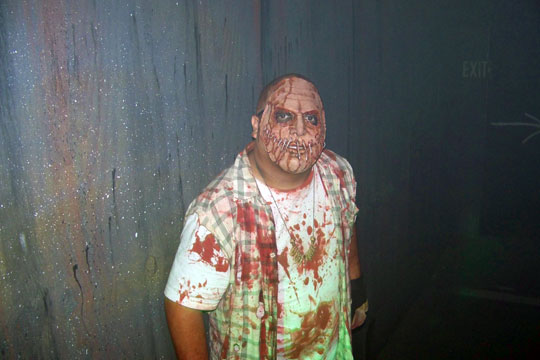 The first maze we entered was Interactive Fear, a take off on the ideas of group participation Schiefelbein introduced last year in his SAW Haunted Attraction. Guests are tasked with performing a series of tasks in order to progress through the maze. Whats more, a short time after entering the maze you will be given a choice of two paths to take, each sending you on a slightly different adventure than the other. We asked the cloaked reaper-like figure at the intersection of the two paths to point us in the direction of the scarier direction and continued on. I don’t want to talk too much about the actual activities you will be tasked with as that would spoil it for you – I just suggest you give yourself over to the scary experience for what it is – a huge amount of fun.

I have a lot of experience with haunted attractions and one thing that surprised and impressed me with Interactive Fear, aside from its scart activities, was its dark motif. A lot of that maze is gone through in almost total darkness. Black walls, floors ceilings – this is in contrast to many maze designers who believe packing their ‘masterpieces’ with as much crap as possible is a good thing. Interactive Fear attempts to deprive you of your normal senses to enhance the experience, which it does to great effect. Added to this is a killer soundtrack by local musician John Autopsy which drives on with hard beats and bass tracks.

The Silent Hill maze, based on Konami’s video game series and the 2006 motion picture, was our second stop of the evening. Passing by the eerie Silent Hill welcome sign (which, incidentally, looks like it was taken straight from the film) its is hard not to get a little freaked out as anyone who has played the games or seen the film will tell you it is not a smart move to knowingly walk into the town of Silent Hill – but we went anyway, the things I do for you guys… Seriously… 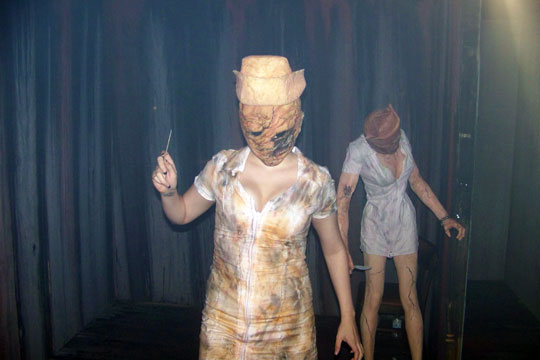 The first stop in the maze is the bathroom set from the film, complete with janitor-creature effect. A great attention to detail has been put into the maze, with IMAGINATION Design Studio custom-making all the props and set pieces. Throughout the experience you will come face-to-face with various monsters from from the mythos including nurses as well as having multiple brushes with the notorious Pyramid Head. In our go-round, Pyramid Head was relegated to a role of being part of the set mostly as props, gags, etc. When we spoke with Jeff later, we learned that they were a bit late with the costume and that they will have an actual actor in the full costume within the week! Take note, people, as the Silent Hill maze was creepy enough without this addition. Having Pyramid Head lurking about, dragging that gigantic blade across the ground will send the terror-levels even higher.

Remember my mentioning the ‘skeleton crew’ earlier in this piece? Well, I did so because what talent was there filled the maze with the energy I would expect from a crew twice their size. They continually brought intensity and scares and they should be commended for their efforts.

After our experiences with the mazes, I got the chance to talk with Jeff for a few minutes about Sinister Pointe, Konami, as well as his plans for the future. The first thing we touched on was that he is planning to move the whole Sinister Pointe attraction to a larger and permanent warehouse for next year’s run. Also, Jeff explained that he and his design studio created all of the props, masks, and costumes themselves – including creating molds, etc! Konami provided artwork and press relations as necessary but could not produce the previously-mentioned. As if this was not impressive enough, they did it all in roughly two months from start to finish. 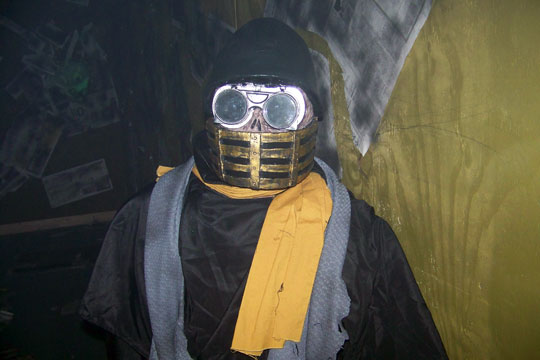 When asked if there was a message he wanted to pass directly on to you, Jeff replied:

‘We just want people to know that we are out there and we are here competing with the big guys. We don’t have a fraction of the funding that these guys have and we are here to be their competition. So we plan on being around and you are going to hear a lot more from us.’

We hope so, Jeff, we really do as Sinister Pointe was a great experience which had some really impressive production values, shrieks, and creeks. If you live in Southern California, you owe it to yourself to check this one out before it leaves for another year!

Sinister Pointe is open on various days throughout October from 7p to 10p on weekdays and 7p to Midnight on weekends. A combo-ticket providing entry into both mazes costs $20 dollars. See the official site for more information. 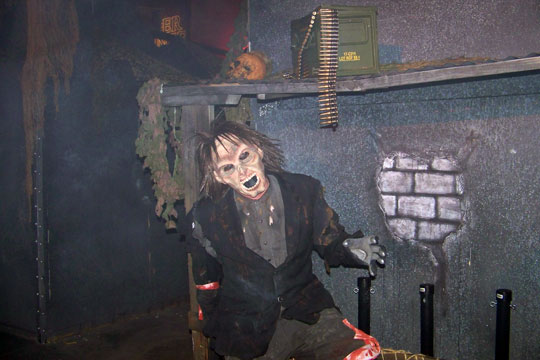