Jaaks Pacific recently released a second edition of their EyeClops Night Vision Binocular. With this new edition, they have redesigned the unit to take up less vertical space and upped the ‘sci-fi’ factor as well.

Technically, while it is marketed as a ‘binocular’, the unit does not actually magnify the view in front of you enough to be able to accurately call itself one. Furthermore, unlike most night vision goggles, the perspective is magnified just enough to not be useful while moving around. When being used from a stationary position, however, they will allow you to see mostly clearly up to about fifty feet away in total darkness.

The elongated binoculars feature the EyeClops-synonymous spherical infrared emitter for long-range viewing while it can also be switched over to use the lower-powered  emitters on each side of the unit. In the center of the spherical ‘eye’ is the infrared receiver which collects the light and an internal processor displays the images on a very large, and surprisingly clear, internal LCD. 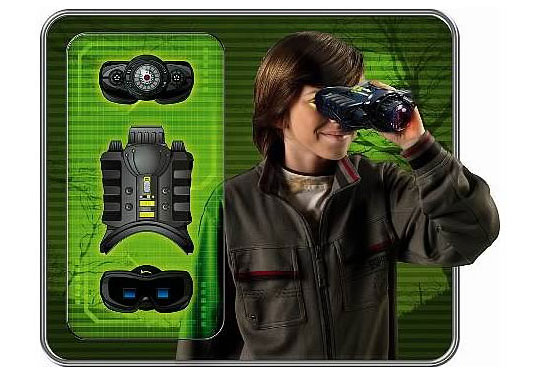 There are multiple control knobs and rotators on the body of the unit as well. For instance, you can change between a black &amp;amp; white viewing mode and the traditional green modes. You can also switch between the previously-mentioned high-power infrared emitter and the lower-powered ones. Also along the top-side of the unit is the power switch. Aside from switches, you will find two rotators, one which controls the focus of the binocular and the other to control the eye-width setting of the viewfinder.

The unit’s construction is a thick plastic which, while much ‘cheaper’ in quality than on a higher-end consumer night vision unit, was actually heartier than I expected and it felt like it could definitely withstand some abuse and keep working.

While the company gears this unit for children, I would not hesitate to bring this along with me to any camping trip our outing where they will undoubtedly come in handy so long as you have enough batteries as the unit takes 5 AAs internally.

At the time of this writing, it appears as though EyeClops has released an even newer version of their night vision gear, an actually NVG this time, which uses the same basic technology as this unit albeit with, we imagine, a more-accurate perspective for easier movement.

For $60 dollars, you just won’t find a better night vision unit out there – they simply don’t exist. Buy one of these and throw it into your ‘go pack’, you never know when it will come in handy!