HP’s 2709m is one of their latest LCD screens. With a real 27” diagonal display, it boasts a hefty amount of physical screen real estate, no matter what you are doing with it. I say that because HP has designed the 2709m to be an all-in-one display solution. Its native 1920×1080 resolution along with an HDMI input makes it also good for being used as your television set!

Physically, the display measures 26.43”w) x 18.45”(h) x 8.41”(d) with a mostly silver body save for the front bezel which is a glossy black. The panel itself is coated with a high-gloss, anti-glare coating which is not overpowering like some displays and really does cutback on glare. Usually these coatings only serve to make the display act as one giant mirror – Not so in this case.

The HP 2709m features multiple inputs and along its underside you will find a VGA port, DVI-D with HDCP port, and HDMI with HDCP port (although USB passthrough ports are strangely missing). Also included is a 3.5mm speaker input for the on-board 2W per channel stereo speakers. They were a bit weak when compared to our standard desktop speaker solution, but should work quite nicely in a smaller space such as a dorm room or small apartment. It is a very nice feature to include and those lacking in desktop or entertainment center real estate will be pleased.

One of the best features of the 2709m is its ambient light sensor which adjusts, on-the-fly, the overall brightness level of the display based on the ambient light in the room. This feature, simply, rocks! How many times have you turned down, or off, the lights in your office to save on power only to be blinded by your LCD screen? I have done this more times than I can count and now, with this feature, I just don’t worry about it anymore. For those of you who are brightness-sticklers, having to maintain absolute control over the setting, you can switch the ambient light sensor off so don’t panic. 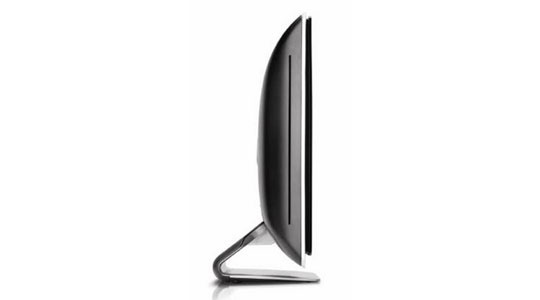 Performance-wise, the 2709m is a fine monitor for your PC gaming needs. I prefer the 16:10 aspect ratio in larger gaming LCDs, usually with a native resolution of 1920×1200. However, the 1920×1080 resolution of this monitor did not prevent me from enjoying my games in any way, and the trade-off for having the larger screen as well as media-capabilities is worth it. The contrast ratio is good, with deep blacks and the dynamic contrast ratio further increases the effect, especially while watching HD movies. I noticed no ghosting effects, the 3ms response time handling both Crysis and Left 4 Dead without issue.

The 2709m currently retails for $399.99, making it generally less expensive than other 27” LCD monitors on the market at the time of this writing. This is a smart move on the part of HP as it greatly increases the ‘buy factor’ of the unit in comparison with other, more gamer or theaterphile-oriented LCDs.

As for hardcore-gamers out there, if you don’t want or need an HD display for your movies, you may want to
go with a native 16:10 monitor running at 1920×1200. The wider aspect ratio will help you in your gaming by allowing you to view more of the game world.

However, the HP 2709m would make the perfect gift for someone looking the find a 1080p movie-watching solution as well as a quality PC monitor without the living or office space for both. Parents, send your kid to their college dorm with one of these things, they will love you for it! Not only will they have all the screen space necessary to do homework but they will also be able to hook up their video game console and DVD or Blu-Ray player to it, essentially-becoming the ‘must hang’ dorm room in the hall for late-night movie-watching. You are essentially buying your college student lots of friends with this thing, GO YOU!