GRIN’s Bionic Commando has already been released on the Xbox 360 and PS3, but they just brought it to the PC crowd and I am happy to say the experience is a very enjoyable, if not slightly flawed, affair. The game is basically the same as its console brethren: Nathan Spencer is released from jail, ten years after the original game took place, to discover who is behind a tragic terrorist attack which leaves huge numbers of casualties and a city in ruins.

Your man weapon and gameplay gimmick in the game: your trusty bionic arm. Most every level has been designed to make use of this element and you will find that it brings the most joy (and pain) of any part of the game. On the PC, I found controlling the bionic arm to be actually easier than on the console. Holding down the right mouse button shoots the grapple while releasing the button retracts it. Simple, eh? Well it is, but not quite, as there are several special actions you can pull-off with the arm. 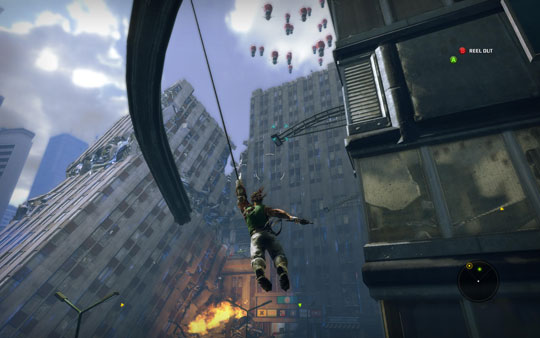 Over the course of the game you will learn to throw objects (and people) with the arm as well as use it as a whip and even a zip line. Usually these movements involve shooting the grapple out and pressing one of two action buttons (which also double as heavy and light punch). Mainly, however, your arm is used as a method of transportation. With the arm you can swing like Spider-Man from object to object and, when you get good at the system, you really get a good sense of speed as the level whooshes by you. Unfortunately, like the console version sometimes this system is a bit user hostile. When moving about, a target reticule will appear above your character. If you are within arm-range of something to swing on, this reticule turns blue. This is as far as the help goes in using the arm, though, and often times you will find yourself overshooting a ledge or other pivot point and flying off into the distance, scrambling for a rock face to attach too. Sometimes the opposite happens and you will have to attach to a ledge that is too close to you. When you do this, you usually end up stopping your swing and dangling embarrassingly from your grapple to the humor of nearby enemies. As I said, when the system works it is quite fun.

Visually, the PC version gets a slight upgrade from its console brethren by way of a couple of extra sliders and options but overall it is very similar. The overall palette is crisp and vibrant and really helps give way to detail when swinging past the terrain at high-speed.

Sound is verbatim to the console versions with good ambient noises and great yells and shouts from the enemy as you throw them about like toys. Overall, the voice acting of all the characters is very solid and adds a great deal to the game’s storyline. However, the one-liners delivered by the Spencer character in-game get a bit annoying after you have heard them for the fiftieth time. 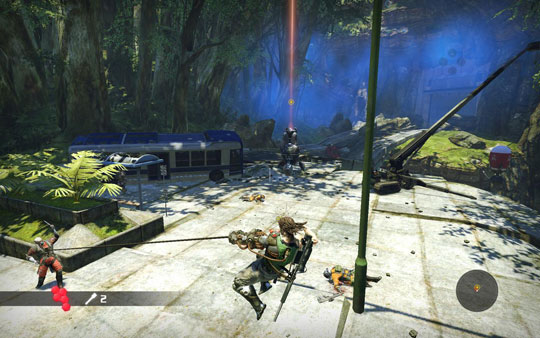 The game is actually divided up into a bunch of small levels, at the end of which is generally a checkpoint. Bionic Commando actually feels a lot like the 2D platformer we all fell in love with on the NES, only brought into the third dimension. Its layouts are usually simple with plenty of places to grapple onto. The problem with these levels is that they are often dangerous places even without the enemies. Your bionic arm is heavy and because of this you sink in water and eventually die. Thankfully, falls from great heights onto a solid object will not harm you. With this checkpoint system, however, you can kill all the mobs in the zone and then accidentally misjudge the often wonky swing system and end up drowning, only to have to start the area over again. As a PC gamer, I find this very frustrating.

HQ will often supply you with equipment in the form of drop pods that rocket into the level when necessary. For instance, when facing off against air-based opponents, HQ will often rocket-in a portable, shoulder-launched rocket system. Other weapons include a shotgun, grenade launcher, and heavy machine gun alongside the ever-present pistol. Spencer can also throw grenades about and this, coupled with the swinging-action of your bionic arm, can make for some really cool grenade lobs.

There are several boss battles in the game, all usually revolve around some grand set-piece (the top of a high-rise, for instance). These boss level designs are usually very small, however, and further enforce my feeling that Bionic Commando takes most of its cues from the original platformer. I should mention that Spencer can jump in this game, a welcome gameplay addition from the original game which disallowed the action. Yay for jumping!

Overall, Bionic Commando on the PC is a much more enjoyable experience than on the Xbox 360 or Playstation 3. It definitely has some quirks but, for the reasonable price of $39.99 on Steam, you will find it’s classic gameplay to be a fun diversion in your off-time from other, more-involving titles.