Not too long ago I was lucky to put together a system into a HAF 932 and instantly fell in love with the plethora of features and details in that full-tower case. Of course when I heard the 922 would be the mid-tower version using the same features and details, I was of course intrigued. I’m not personally a fan of either cases’ look and feel, but even Cooler Master calls it a ‘beastly chassis’ that comes with ‘rugged looks’. Rugged it is, in look and construction. The steel case is heavy for its size and does none of that wobbling around thanks to its wide footprint. That footprint can be a curse, though, if floor or desk space is a concern.

Cooler Master calls this series HAF (high air flow) for good reason. Intake starts in the front with a 200mm fan blowing directly over the 3.5′ bay and into the case. There is an optional side intake fan that is perfect for giving the larger video cards enough air to breath. You can use a large 200mm fan, or even two 120mm fans depending on your desires in that side panel. In the top/rear, there is a 120mm fan to keep your CPU heatsink fresh along with the giant 200mm fan at the top to collect all the heat and push it out. The wonderful thing about the larger fans is the low noise to air flow ratio. This case keeps my test system at the same temperature as an Antec 900, but is significantly more quiet. The power supply is bottom mounted (video review correction, I said ‘rear mounted’ [of course it is!]) with venting at the bottom for power supplies with the large top fans. This way your power supply does not collect warm air from inside the case – just be careful to keep that fan cleaned out regularly. 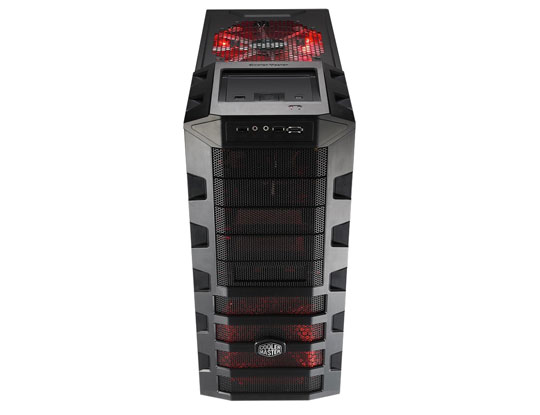 Speaking of the Antec 900, a good case in its own right, my test system was quite literally crammed into that mid-tower. With a PC Power &amp;amp; Cooling 750w power supply and an EVGA GeForce GTX 280, there was no room to breath. If I wanted to add a new hard drive, it would require disconnecting several power cables and removing the video card to make it fit. In the HAF 922, none of this is a factor. Even with the epic cables of a non-modular PC Power &amp;amp; Cooling power supply, I was able to keep the cables out of the way so air could travel freely through the case. The EVGA GeForce GTX 280 had over five inches of clearance before the 3.5” HDD bays. Even if it was close, I wouldn’t have any issues because of the clever non-tool 3.5” sliding bays that come out towards you as you’re looking in, instead of back over your motherboard. Behind the motherboard tray is about an inch of room to snake cables around without issue and logical holes to bring them back into the motherboard to plug in CPU power. For the larger heat sinks both air and water, there is the large hole right behind the CPU socket to easily manipulate the backplate for the large and heavy heatsinks. You no longer need to cut the hole out yourself if you want to swap a heatsink out without having to remove your motherboard, and I personally believe installing the heatsink while the motherboard is in the tray is much easier.

Several details came along from the full tower version: the non-tool 3.5” and 5′ bays, the ‘rugged looks’ and extreme air cooling without much noise. I was slightly surprised that the non-tool expansion card clips did not come with the case. Although most builders feel uncomfortable with allowing plastic to hold in their many hundreds of dollars worth of graphics cards, I felt the 932 was holding on to the expansion cards without issue and did not feel unsafe using them. The 922 comes with thumb screws, which of course is fine I was just curious why it was excluded. Another small thing was an 8pin CPU power plug extender that came with the 932, but not the 922. Although this is a mid-tower, my test system’s power cable could not reach the plug by going around the rear and instead had to be routed over the motherboard itself. The motherboard tray is also missing several holes for sneaking power cables in and out that could have been incorporated without too much fuss. That said, it’s possible the strength of the tray might have been overly compromised had they included those holes that are really only for the truly anal builders out there. One more small detail, mostly something that comes with the territory of the mid-tower cases, is the single front USB header. My test board only had one, but it’s something worth mentioning for the USB-happy users out there since the 932 has two. 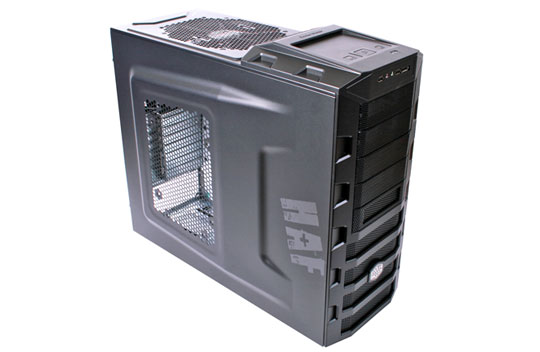 The Cooler Master HAF series has yet to disappoint: solid, heavy-duty construction along with the little details that make the cases so well thought out. For its price-point, I cannot recommend a better mid-tower case plain and simple. Even though I do not personally like the looks of these cases, that opinion is vastly overshadowed by the sheer ease of installing a system and hiding away a monster power supply’s cables. The volume of internal space for expandability, I have not seen in a mid-tower case to date, and the simple upgradability of the case is wonderful. Adding a new hard drive take mere moments, most of that would be hooking up the power and data cables. Adding a new heatsink is a simple affair, able to be done without removing the motherboard from the tray. With room to spare, the 922 has space for SLI and Crossfire, just about anything you can think to throw at it. Cooler Master has done it again with the HAF 922 – I can’t wait to see what they’ve got up their sleeve next!

Video Overview to Accompany this Review: