The throttle assembly is an integral part of any homebrew cockpit, whether you are building a full-scale replica of a 747 cockpit or throwing some random peripherals together on your home office desk. Most of us fall into the latter category but just because we have limited space and budgets doesn’t mean we necessarily have to skimp on quality.

CH Products, long-known for their flight sim peripherals, has a great option for your throttle-needs with their simply-named ‘Pro Throttle’. Featuring an all-black plastic body the Pro Throttle has the overall curves and design of its predecessor models which used CH Products’ GamePort interface. Thankfully, this throttle uses a USB interface making programming a ton easier (but more on that later). Unique to the CH Products’ throttles has always been their sliding action. Most throttles utilize a pivoting action from a single point on the side of the quadrant. The Pro Throttle controls with a smooth glide forward and backwards on a central track. The feeling is quite natural although I would liked to have seen the option to adjust the resistance.

Also, for the size of the Pro Throttle it is actually quite light, roughly 3lbs. Moving the throttle forward and backwards can make it slide a bit on smoother surfaces, even with the four rubber boots it has to try and stop this motion. I would have preferred to see CH Products fill the base of the throttle quadrant with some heavy elements to give it a more immovable feel. Another option would have been to provide some screw holes in the four corners of the quadrant base to allow sim-jocks to screw the Pro Throttle into a static place.

You may think that I did not like the Pro Throttle with these criticisms. Far from it, actually, as I found the Pro Throttle to be a joy to use in multiple combat simulations, ranging from Wings Over Europe to Lock On: Modern Air Combat.

Installing the Pro Throttle is fairly simple either way you choose to go about it. The first option is to plug it straight into a USB 2.0 port on your PC and allow Windows to register it as a game controller. This allows you to use all of the sticks and axes available. However, you can also choose to install the CH Control Manager as well. The CH Control Manager is a proprietary bit of software from CH Products which can unlock the full potential of your Pro Throttle. 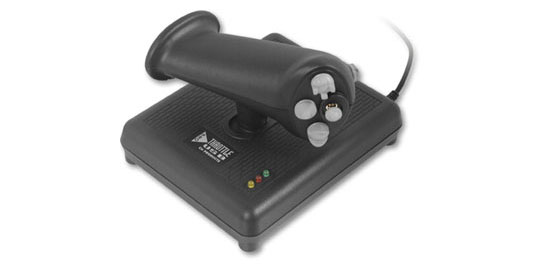 On the throttle handle of the Pro Throttle you will find an array of controls. There are a total of three standard buttons along the front of the handle, a four-way hat for your index finger, two additional four-way hats for your thumb as well as a hat switch and mini-joystick. That’s a lot of controls available to you – 24 control channels to be exact. The interesting thing about the mini-joystick is that when depressed it also acts a mode switcher, allowing you to cycle through ‘green’, ‘red’, and ‘yellow’ controller modes. Each of these modes can be assigned a different function per control via the CH Control Manager. This greatly increases your control capabilities and allows you to do cool things like assign all NAV mode aircraft controls to the ‘green’ Pro Throttle mode and the ‘yellow’ and ‘red’ Pro Throttle modes to A/A and A/G aircraft modes. It is not possible to assign different controls depending on the mode without the CH Control Manager.

Overall, I would recommend the CH Products’ Pro Throttle to any serious flight sim enthusiast, no matter how serious or casual. It features a really fluid control system and, while a bit light, will give you a ton of control over your aircraft. It is available now with an MSRP of $149.99, however at most online retailers it is markedly less. A bigger question is: What flight stick are you going to purchase to go with it? Technically the whole purpose of a throttle and stick is to create a HOTAS (Hands On Throttle and Stick) setup where you don’t have to use the keyboard at all. While a lofty goal, many controllers just don’t give you enough buttons to accomplish this. The Pro Throttle, I’m happy to say, is NOT one of them. Check six!