Every year a new season of sports games comes rolling out and, each year, we get a list of minor tweaks which never really leave the fans with something new to sink their teeth into. Enter the monster known as NCAA Football 10. This season&#8217;s college football extravaganza gives a blitz to an already deep sports series. Let&#8217;s jump right in and check out some of the features.

The first thing that is going to pop out to you is the presentation. NCAA Football 10 really shines when it comes to making you feel like you are at the game. The stadium is alive with rabid fans cheering on their sides, marching bands are doing formations on the field, and the songs of the home schools fill the air. As with every EA Sports game ESPN has a huge presence and tightens up the presentation with college game day precision. The announcers are not in the way and can even detect when two rival schools are going at each other by throwing in some facts. NCAA Football 10 and its commenting team has added Erin Andrews sideline reporting to this year&#8217;s version and she does a good job by giving up to date info when a player gets hurt. This really is the ultimate college experience as far as immersion goes. I had several people ask me if I was watching a DVR of a last season game. There is also nothing like seeing the Georgia Bulldog&#8217;s mascot does a headstand or chase after a football when you score. The crowd reacts to pivotal moments in the game and I even discovered that when you are at home and losing badly (which I seem to do a lot) they can go deathly silent. Big props go to the developers for continuing with the outstanding feeling of actually being at the game. 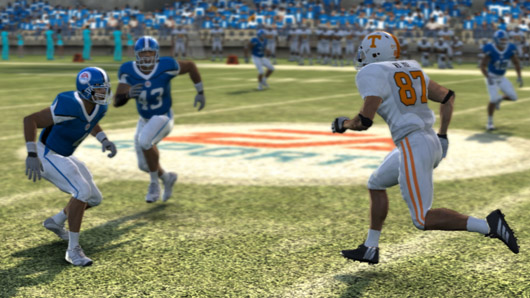 The basic gameplay is similar to other football games so we will focus on the improvements. There is the normal mode and family mode which you can choose. Normal mode gives you the deep ability to choose your formations, plays, and audibiles. The play calling goes a step deeper as well by allowing you to adjust your ‘style’ per each call. Say you want to focus on hard hits instead of balance play or defense. You can set your players to do just that but you may get more penalties along the way. In all there are 11 different attributes for both offense and defense to adjust depending on what&#8217;s going on in the game. The AI can be a bit wonky at times during certain plays that you choose but it does not really cause any real hampering of the experience. There is the great addition of a pre-play menu where before you hike the ball you can lock on to a certain player to control their movements or change formations on a fly. A big draw this year is the new ‘family mode’. Say you don&#8217;t know a lot about football or want to play with one of your kids but they are a little scared about getting decimated by your blood-thirsty gaming nature. This new mode takes away a lot of the customized game play options but still gives you a great game. One-touch passing and auto-catching make it easier to just get out there and play for fun. The playbook for both levels of detail also gives you the option to have a coach give you tips on what plays you should make. NCAA Football 10 also features an online matchmaking system that is easy to start up and play. I had no problems getting right in there and being stomped on by a much better player.

There are so many new modes this year but the best has to be the TeamBuilder. Have you ever wanted to recreate ANY high school you went to: Middle school, high school, etc? With TeamBuilder you can go to an easy to use web-based interface and do just that. You can name your roster, set your team colors, and even add logos or make a home playing field from a list of generic stadiums. Once created you can access your team from the TeamBuilder section of NCAA Football 10 and simply download it to the game. It was easy to use and I found no problems with getting my high school team imported. TeamBuilder is simply too awesome for words. It really brings NCAA Football 10 to the next level of sports games. I imagine a father and son creating the kid’s school football team and then taking it on to glory. On top of that you can download other user-created teams should you want to try out some of the community’s excellent team-builds.

Season Showdown is a unique new mode that allows you to play and root on your favorite school from the pre-season through the regular season. By fighting it out with the computer or playing online games you earn credits for your school. These credits can be spent on things you do in-game such as tackling, touchdowns, and defensive plays. Not only that but just like in real college football – sportsmanship counts for something. Next time you punt the ball down the field it might not be a good idea to bash the receivers head into the dirt when he waves off the punt. Being a good sport earns you extra credits that go towards your schools rankings. There is also an offline portion of Season Showdown where you can answer trivia challenges to gain credits as well. The team that is the top of the rankings at the end of the season will be crowned champion. 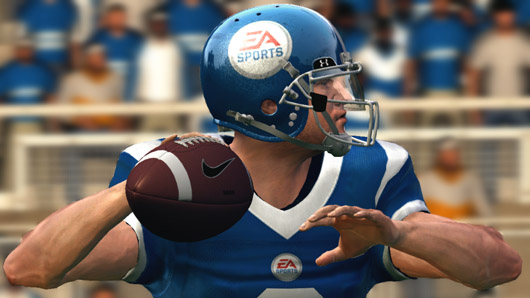 The final new mode is the Road to Glory mode hosted by Erin Andrews and Kirk Herbstreit. The presentation, like the rest of the game, is top notch with green-screened sequences featuring the hosts. You create a player and they chronicle your rise through the ranks of your college career. You even have your own dorm room where you can view your awards, catch up on news, and view photos from your career.

Returning in NCAA Football 10 is the Dynasty mode where you coach your favorite team through years and years of play. Feel like red shirting some players for staring at you wrong? Oh you can do that and just about any other thing you feel like doing as a coach. You can simulate the entire season or play out each season, game by game. It is entirely up to you on how you want to do it. There is also an online dynasty option where you can import 12 of your creations from TeamBuilder to launch your career.

NCAA Football 10 is an excellent football game experience and, I dare say, one of the best football games ever made. For someone that played football in high school like me its depth really was engrossing in a positive way. Coupled with giving casual players an option to get in there without getting overwhelmed and you have yourself a real winner. If you are a sports game fan get out there and pick up this title before you get blitzed into the turf.