Saitek has made a lot of fans out there in the flight sim community by selling good-quality peripherals for competitive prices, and their new Pro Flight Instrument Panel continues this tradition. Our two panels arrived in unassuming, well-fitted boxes, I pulled out a panel, plastic mounting bracket, screws, and allen wrench from one box and began to go to work, planning how I wanted my home cockpit to look.

Saitek had the forethought to include a series of six screws/mount points across the top of their Pro Flight Yoke just to accommodate these extra peripherals. I grabbed the plastic mounting bracket and flight yoke, removing two of the screws from the top of the base unit. Then I screwed the instrument panel mounting bracket into the flight yoke and slid the instrument panel itself into its plastic mount. The mount is somewhat cheap-feeling, which is surprising given the quality of the panel itself. Four screws attach the panel to the mount which was extremely easy to install. Aside from the screws on the flight yoke, no tools are needed except for your fingers. 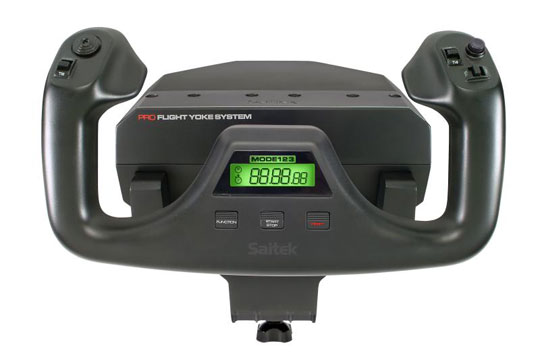 Looking at the instrument panel, the 3.5” LCD was covered by a plastic safety film which I promptly removed and then played with a few of the buttons which array in an L-pattern down the left and bottom of the panel. They reacted crisply but I was slightly worried about actually pressing the buttons on the panel without bracing it somehow. Even all screwed in, the panel mount flexes slightly when a button is pressed. I never heard any cracking or breaking come from it so I assume the mount is fastened properly. Still, the flexing made me a little nervous so I would quickly learn to use it by pressing the buttons with my thumb and bracing it with my fingers.

The cable which comes off of the back of the panel can easily be plugged into the USB passthrough on the flight yoke, but beware you will need the optional AC adapter to use it properly that way. If you do not have the AC adapter on your flight yoke you can plug the panel into a powered USB port on your PC.

Installing the CD-ROM software is as easy as can be. A few simple menu selections as to where you want to install, etc and you are on your way. After the software is installed and you plug your panel into a powered USB port, it will gleam to life with a default Saitek Pro Flight splash screen.

The software is already setup to use Microsoft’s Flight Simulator X so I fired it up to check it out while actually playing the game. I loaded up a free flight and just giggled when I saw the instrument panel flash its default gauge: The altimeter. Before actually taking to the skies, I pressed through all of the available gauge modes with the up and down arrows at the bottom of the panel. 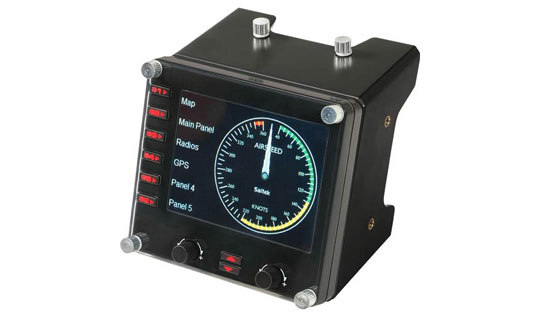 The instrument panel also features two knobs which interact with many of the available gauge modes. For instance, in the compass mode, you can control the VOR indicators as well as calibrate the altimeter. This tactile response really adds to the realism and immersion of the sim and, if you can afford six panels, you would not need to show the 2D or 3D panels at all giving you a lot more viewing room on your screen. With only two, we still needed the on-screen panel for other instrumentation.

Here is our test rig (pardon our mess) in lower-light conditions: 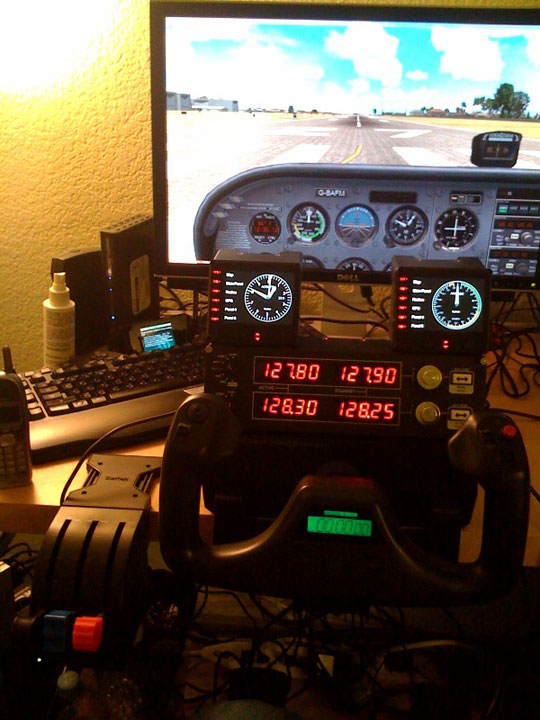 As you can see, the realism is further enhanced in these slightly lower light conditions as the light of the instruments glowing brightly brings your eye’s out of the same plane of focus as the on-screen panel. This gives the illusion of greater depth between the panels (and other peripherals) and what is happening on the screen.

The buttons arrayed along the left side of the panel control popup sim instrumentation windows such as the GPS display, map, and radio stack. These allow you to access that instrumentation without using an onscreen button (accessible with the mouse cursor) or keyboard shortcut. Additionally, this helps you not lose focus while flying as it is far easier to keep your eyes on the skyway with a button press in your field of vision then taking your eyes off where you are headed to find a keyboard button.

Currently, the Pro Flight Instrument Panels are only compatible with Flight Simulator X out of the box, but the software does include an SDK for your developers out there looking to make use of a detachable LCD in an upcoming project.

I love their modularity but hope that Saitek will create a dual or triple-LCD unit in the future, giving more of a ‘glass cockpit’-feel. This modularity, of course, helps to keeps the cost per unit down. You can walk away from most online retailers with a Pro Flight Instrument Panel for $149. Buying the full six needed to never have to switch between gauge modes would cost you roughly $900 US dollars. Now compare that to an Elite Pro Flight Panel II which only includes some switches and a yoke which runs roughly $2,800 US Dollars. With the Saitek peripherals you are getting a whole lot of bang for your dollar.

The most glaring issue I can see with these panels is their less than stable mounts. One way to help with this would be to buy multiple panels and attach them together via the side bracket screw holes. Then attach the three panels to the yoke. This would give added stability to the array of panels. If you don’t have the money to do this, bracing the panel with your fingers while pressing buttons with your thumb becomes second nature only after about a half hour of flight.

Another configuration of panels: 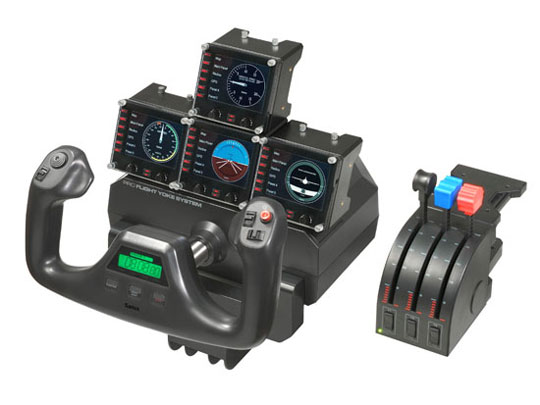 Saitek has once again hit it out of the park with their Pro Flight Instrument Panel. It provides a lot more realism to your flight sim experience while not breaking your home-cockpit budget. Installation is a breeze and the software automatically sets the unit up for Flight Sim X. What more could a simmer ask for? Another panel….Muhahaha… 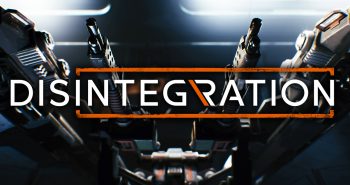 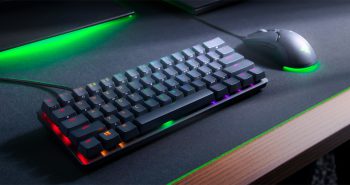