For those of you who have always wanted to go hunting but do not have the nerve, scratch, or means to do so, ‘The Hunter’ from Emote Games and Avalanche Studios is probably the closest you can get. You create an account at the official game website and then can choose between three subscriptions, or hunting licenses, for the fictional place called ‘Whiteheart Island’. For a year license, it will cost you $44.99 dollars. The smallest subscription is for three months and costs $14.99 dollars. This entitles you with all hunting privileges therein. Now, you can play for free just to try it out but there are severe limitations on your allowances such as what you are licensed to hunt, the weapons you get, etc. However, at least Emote Games and Avalanche Studios offer such an option to gamers so they can get a feel for the game in advanced of purchase. Also available are in-game credits called ‘Em Bucks’. These can be used to purchase additional clothing, weapons, lures, etc. 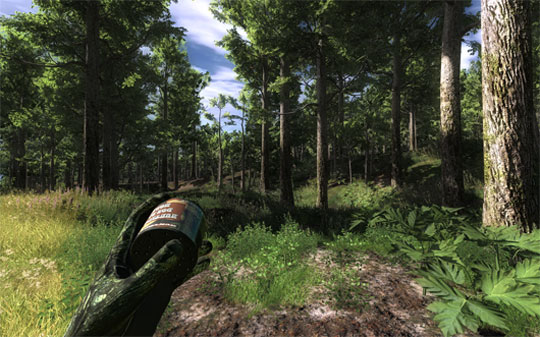 You begin a hunt by logging into your web account at the official site and then selecting ‘Go Hunting’. You will be able to pick a start location on Whitehart Island as well as time of day. From there the local game client will start up and you can select your equipment loadout. After this, you are off in the wild to enjoy the thrill of the hunt.

Personally, if I have a spare weekend day to putter about, I prefer to start ‘early’ at 8:00am (in-game). Then I can spend all day moving about the island and stalking quarry. Once in game the first thing you will notice are the rich environments. These are, without a doubt, the best hunting game visuals I have ever seen. Beautifully detailed and realistically-depicted. From undulating grasses to the diffusion of light in the treetops this game has it all. There is a full day/night cycle and even convincing weather effects. Why can’t those ‘other’ hunting games get this right?

Of course, what would great environments be without sound? Thankfully, The Hunter features just as incredible sound design. The ambient noises one hears when just moving about the island not only allow you greater immersion into the game but also can tell you alot about your stealth-levels. Making too much noise can frighten off the prey… 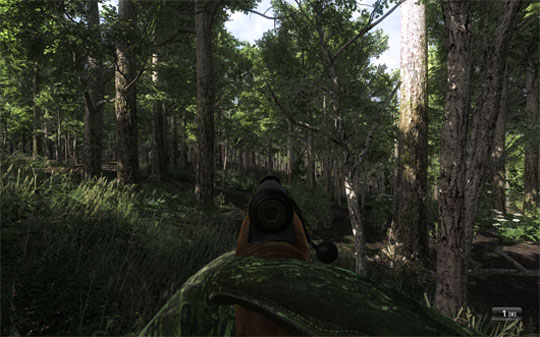 And the prey… Game in The Hunter have very realistic animations as well as behaviors. There is a digital camera available so that, if you like, you can just snap pictures in-game all you like. Just be careful as the shutter sound can scare off the animals. Just taking time to observe a mule deer before shooting it is pretty incredible and, for the week stomached, will definitely tug on those heart strings.

Heart strings be damned, we are carnivorous gamers and must eat, right? So we take the shot and then comes the fun part. You see, shooting a big animal like an elk or deer can have all sorts of effects. Sometimes, they drop like three hundred pound rocks. Other times, though, they take off like banshees into the woods! After the shot is fired and the animal bolts, its time to chase it down. You know you hit it as you can follow its blood trail, now the only thing you have to do is find it. This location of the carcass can last quite some time depending on the terrain and distance the animal traveled so look sharp.

Thankfully, The Hunter realizes that most people are not born experts in the field of identification of defecation and tracks so they have taken the one liberty I could find in the game: The Huntermate! This device allows you to properly identify evidence left by animals from their poop to tracks to noises. It also will give you clues as to what direction they went from that evidence. Of course, it is still up to you to find the next track and sometimes you will lose your way or possibly stumble onto a more defined one. Such is the way of the hunt.

The web component of The Hunter adds a sense of community to your experience in that you have leader boards, forums, and at some point even missions to undertake. It is really the front end of the game with the only thing on your local machine being the game client and you cannot run that by itself. I am definitely looking forward to what Emote Games and Avalanche Studios has in store for this excellent game. 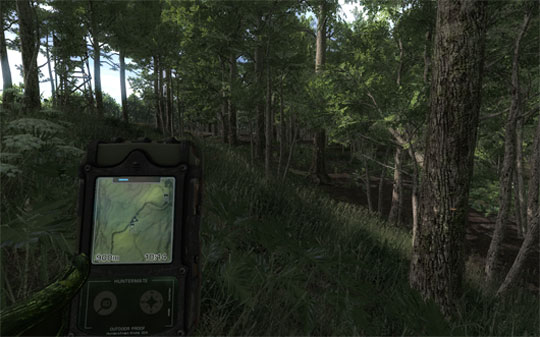 Of course, immature gamers looking for a shoot ’em up are going to be disappointed as, even at full bore, your character does not run unrealistically fast or even jump. Your movements are always encumbered by whatever you hold in your hands and your stance and movement speed completely effect your level of detection by nearby creatures. Casual gamers also have the possibility of disappointment as The Hunter is not a game you can just pick up for a fifteen minute session (unless you are REALLY lucky). Most of my hunts last a minimum of forty five minutes and can last X amount longer based upon your ability to effectively track and use your weapons, all of which have realistic recoil effects, sighting, and reloading times.

For a refreshingly realistic and quality take on the hunting experience, I cannot recommend The Hunter enough. With the free play account available you really have no excuse not to give it a try and see for yourself, if not as a hunter then as an explorer.