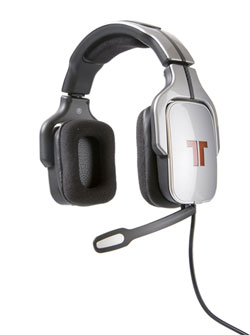 Tritton has a fairly large line of gaming audio products. Their headsets in the past have generally been focused on one type of input. For instance, the Tritton AX PC is geared towards PC and Mac usage while the AX 360 is, as you can probably imagine, geared for use on the Microsoft Xbox 360 console. This AX Pro, however, is a new breed capable of utilizing multiple types of inputs while also including Dolby Digital and Dolby Prologic decoding for a true 5.1 channel experience.

The Tritton AX Pro comes out of the box in a very daunting fashion. Aside from pulling out a ton of accessory components which ship with it, the actual headset itself is large and covered in a sleek silver plastic shell. Its ear cups are gigantic, allowing them to cover your entire ear for maximum comfort. In the box, Tritton even sends along a set of feux-leather pads so that you can find the best fit and feel for your head.

This is really something to take note of, because if you look at most any other headset review I have done, you will notice I say it is ‘too tight’ or that the unit doesn’t fit around my ‘gigantic noggin’, or something to that effect. These Tritton’s fit extremely well, and kudos must be given to them for taking into account the large-headed. The AX Pro feels very sturdy, and the quality in which they were made is immediately apparent to the wearer. They come equipped with a detachable boom microphone which worked splendidly during Skype calls, and also was heard loud and clear during Xbox 360 gameplay. 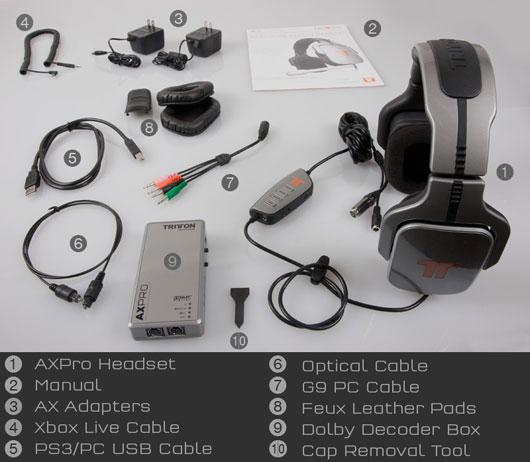 Setting the headset up is a fairly confusing experience for the uninitiated. Tritton provides a large, fold-out poster detailing the setup procedure for each type of input, but nevertheless it is still somewhat confusing until you have done it a few times. The AX Pro comes with two power adapters, one for the Dolby decoder box and the other for the headset unit itself. Usually, the headset will plug into one of the two (yes you can connect an additional AX Pro headset) headset ports on the Dolby decoder box, and from the box to your input source. Technically, you don’t need to connect the decoder box for PC usage unless you want to make use of the optical or USB connections, or, the Dolby decoding coolness. You could use the PC adapter cable and plug it directly into the multiple speaker outputs of your sound card. However, I must say that the sound from the optical connection on the sound card is exceptional and what you should opt to use as much as possible. The problem with all this cabling going back and forth is that the area all of it will sit in gets a bit messy. Even with the initial confusion and mess however, the effort is worth it when you finally get the headset up and running. We would like to see a wireless version of the AX Pro (and rumor has it that CES might see the reveal of this – stay tuned).

We tested the headset out on a friend’s Xbox 360 (see here as to why) and played some HD-DVDs. The sound is just amazing and really replicates the theater experience, but better, because you don’t have to keep yelling ‘Shut up!’ at the annoying teens talking behind you. We took the AX Pro to our PC and, after plugging in the fiber optic cable (and enabling it as an output on our Sound Blaster X-Fi) were off and running in Fallout 3. The ambient noises of the D.C. Wastelands filled my ears from seemingly all directions. The channel positioning is just a hoot and it was never an issue to track which direction a molerat was coming from so I could introduce him to my ‘Shishkebab’. All of this is thanks to the four drivers in each ear cup which are assigned to a different channel. There is even a 40mm driver in each ear cup assigned to be the sub-woofer. While the bass response in the headset is not what you could get out of a bigger home theater system (obviously), I have to say it is very nice and firing my ‘Eugene’ mini-gun at some feral mutants made me crack a geek smile the length of the mighty Mississippi River! Turning the volume up and down on the headset is done via an attached control pad with color-coded levels of intensity on a per-channel basis which allows for a high-level of volume customization. 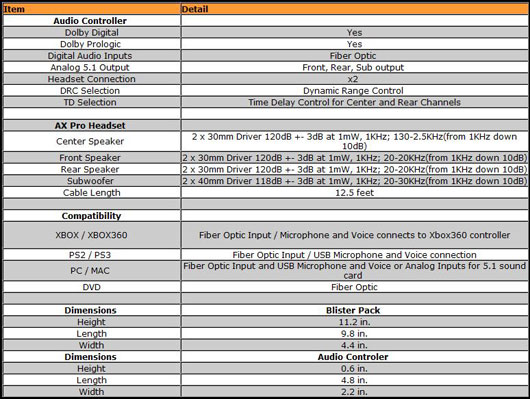 Overall, the Tritton AX Pro Precision Gaming Headset performs like a champion worth twice its retail price of $179. If you are looking for a true 5.1 channel headset for use in most (if not all) of your devices you need look no further. Whether it is gaming or HD-DVD (we are what the kids call ‘old-school’) watching, the AX Pro will deliver every time.