Creative Labs has released a number of gaming headsets recently. However, all of them up ’till now have been bound to the PC system by a wire (sometimes two). Enter the HS-1200, their first wireless gaming headset. 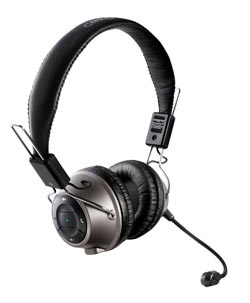 The HS-1200 is a modest-looking headset: simple lines, light if not durable solid construction, and spartan overall design. Not saying the design is bad in any way, it is just not as flashy as many gaming headsets out there. It doesn’t feature any gaudy decals or quasi-futuristic curves where it doesn’t need them. In fact, it is easy to underestimate the HS-1200’s capabilities based on looks alone. That is, until you use the headset.

The flexible headband and ear pieces are covered in a soft velvety material which did not seem to bother my cohort’s noggin, even after many hours of play. On my head, however, I felt a bit compressed after about four hours of gameplay. I have a bigger head and obviously this is a factor here. So, those of you with large craniums take note, you will need to take the headset off and rub your lobes every four hours or so. For those of you blessed with thinner noggins, well, good for you. We hate you (not really).

Getting the headset installed was very easy. We used the software installation disk on our Windows Vista build. It took a few minutes then asked us to plug in the HS-1200’s receiver unit. It detected this and before you know it, we were ready to rock and roll. On our Windows XP Pro build, we just plugged the receiver in without installing the software. XP took note of this automatically and began using it. We don’t recommend this to the average user, however, especially if you are a Vista user. This is because Vista does not natively support DirectSound (lame Microsoft). And in both operating systems, the software enables the CMSS-3D and other cool X-Fi features. Don’t fear though, Vista users, as using OpenAL and the Creative Labs’ solution, ALchemy, 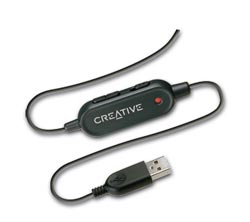 The boom microphone on the HS-1200 is unique in its mute control. Basically, the boom mic swivels up and down from the left ear piece. When in the up position, it automatically mutes itself. When in the down position, it un-mutes. This system makes it easy to remember if the microphone is hot or not. We found microphone levels to be a bit low however, and needed to up the input gain to even them out. Aside from the low levels, the microphone displayed excellent noise reducing capabilties, especially in applications like Ventrillo and Skype. The issue we had with the boom mic is that when swiveling it, you tend to grasp at the boom itself. Unfortunately, the boom is a ‘snake-neck’ design and bends all over when doing so. The solution is to swivel at the joint where the boom meets the headset. Problem with that is the small ‘handle’, and I use the term loosely, is difficult to grip. In the next variant of the HS-1200, they should make that out-cropping a bit larger.

On the outer side of the right ear piece are the volume and power buttons. Also on the control array is the ‘phone button’. This has designed for use with Microsoft LIVE Messenger and Skype to answer and hang-up on calls. The control array is shaped well enough to determine which button is where just by touch, so you will not need to take off the headset to use them.

The on-paper range of the headset is 72 feet. This was measured in open space with no walls or other obstructions. In reality around our office we got about twenty feet away from the PC before losing connection. Battery life is written as up to 8 hours of play time, and our gaming runs reflected that metric. Unfortunately, the battery is internal and not changeable. Recharging the unit is done through a simply plug that comes off the receiver unit, but this does mean that if the battery dies for some reason, the unit will need to be sent in for fixing. It only takes a couple hours and change to charge the unit, and it can still be used while the charger cable is plugged in. 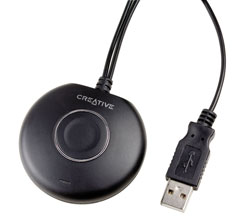 We found the sound coming from the 40mm Neodymium drivers to be crisp and accurate. In the Creative Console headset surround sound test, I originally had the volume up a bit too high and the sound of the helicopter they use was impressive as hell. Once I heard that, I knew I was in for a treat. While gaming, Creative’s CMSS-3D virtual surround sound is plenty useful in discerning relative direction of effects. OpenAL also comes through well with the headset. Using either of these methods in your gaming will yield good results. We tested the headset in Age of Conan, Crysis, and Battlefield 2142. In all cases we were more than pleased. The surround sound coming from the headset was immersive and enjoyable. We did not experience any strange anomalies, driver issues, or software glitches to speak of.

For $99 dollars, the Creative HS-1200 Digital Wireless Gaming Headset is an excellent purchase for its quality as well as convenience. While VoIP users will like this product for its wireless capability and phone button, this unit was really meant for gaming and thats where it shines.