Starting a Death Knight goes about in the typical way, the long camera leading up to a floating citadel above the Eastern Plaguelands. The first thing you see once you’re logged in is the Lich King himself. You go about getting used to the Knight’s abilities. You learn how to attach a rune on your weapon, which is basically like a mild enchant. Already you are intimidating with a full set of starting Death Knight gear and the giant two-hander.

After learning the basics of the class, you are sent down to the plaguelands to take on the Scarlet Crusade that’s held up there. 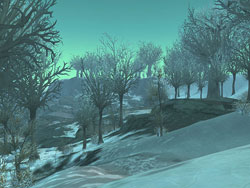 The quests are definitely in line with your character being a complete evil badass – remember you are one of the chosen by the Lich King himself. You are given several tasks, killing civilians among them until you eventually sneak your way to the Scarlet Crusades docks. You find out that they’re changing their name and heading up North for unknown reasons. Once at the docks, this was the first time I encountered a mounted weapon in the form of a giant cannon. Well, you blow them to high hell and escape narrowly on a skeletal gryphon.

Here’s where it started to blow my mind. Once I checked into the citadel, I was sent promptly back – but everything had changed!! The town I had fired upon was on fire, and our position had shifted as well as the NPC’s. We moved forward closer into the town where I was sent to infiltrate deep inside while an army of ghouls assaulted their defenses at their gates. With the new quests (which included beating people with special weapons to make them give up secrets) I started to get the feeling like something was wrong. 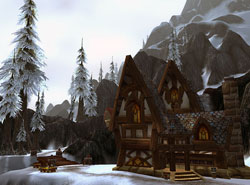 I’m all for mayhem, but there are a few quests that I almost didnt’ want to do – you’ll know them when you get to them. I was eventually sent back to the citadel and then back down yet again. The scenery had changed once more and I was given a skeletal dragon to assault the last remnants of the Crusade. When the dragon was low in health you had to swoop down and eat someone, the dragon swept a random guy up and I flew into the air as I was constantly bombarded by arrows and whatnot. When the dragon was done eating, the body was dropped unceremoniously. Once I was done with the destruction I was decked out in a full set of blue armor – and on a dreanei it looked plain out evil.

The final quest is tasked by the Lich King, he sends you to Light’s Hope Chapel to take on all of the bad ass Elites NPC’s there. Well it took me a minute to figure it out… it looked like the aftermath of a battle had taken place. Several other Toons were waiting around wondering what to do. 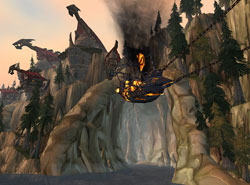 Suddenly, the entire zone reset and we were standing in formation with all of the NPC’s from the citadel along with some GIANT elites on our side. When the time came 10,000 – yes… ten thousand – ghouls, ghosts and various other things came out of the ground and we charged the Light’s Hope Chapel. You’re given a buff that basically makes you a god so you can just have fun and experience it. Kicking the crap out of everything in sight was amazing among the battle.

At the end, some really amazing stuff happens that ends with the Lich King of course showing his true colors. We ally with Light’s Hope and pledge allegience to the new ruler of the citadel.

After all of that, going to the Outlands (I was just over 58 after all of that) and grinding up through 70 had no appeal so I passed through the Portal and camped out probably never to play that character again. There were several bugs that are somewhat major mostly involving the mounted quests, but I’m assuming they’ll get ironed out. 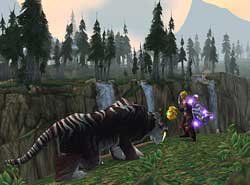 Gameplay with the Knight reminds me of a rogue. You build up runic power to use spells, I liked the ice stuff mostly so I specced in that. During the beginning experience you are slowly (or quickly) given a few talents here and a few talents there so you can get to know stuff as you go along. I found getting used to the Knight fairly challenging, although you can bring some serious pain very quickly the defenses just aren’t there once you get more than one guy on you. This might also be partly because abilities at the level I was didn’t have much in the way of defensive power. That, and having no way to heal yourself effectively of course.

I would highly recommend that everyone do this experience even if you’re not planning on playing the character.