I must start this by saying that I am no audiophile. I am a gamer. So I do not know about decibels and other things with complex molecular structures. I know frame rates and how things sound to me as I smite my numerous enemies, see them driven before me, and hear the lamentation of their virtual women. Its what I do.

The Creative Labs X-Fi Titanium Fatal1ty sound card is their second foray into the world of the PCI-E interface. Primarily used for graphics cards up to this point, it is good to see some additional hardware for the faster interface. 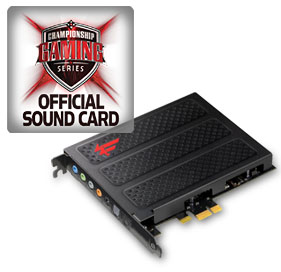 This is, without a doubt, the coolest-design for a card that Creative Labs has ever made. The circuit board is semi-enclosed and shielded by a black metal casing that gives the X-Fi Titanium the look of a cartridge that would record data aboard Blue Thunder. It features color-coded input ports on its backside that make connecting your speakers extremely simple. I remember a time when I would connect the plugs, run the surround sound test, and try again and again until it was correct. Well, times have changed. We have colors now. On our original X-Fi Fatality, the lack of optical plugs was disturbing. Creative has added such an option now with an optical input and output. This makes it much easier to connect to your home theater’s receiver/decoder. On the outer edge of the card when seated on the mobo is the standard X-Fi logo, back lit in white when the PC is running.

Installing the card physically was not a chore by any means, the card itself is fairly small and it fit within the case without issue. If you have two video cards installed, there could be an issue getting it to fit, however. After installing the software, you have to type in this special code to activate your product over the web. This is a new security feature Creative has introduced and we are still not sure what their long-term reasons are for doing this. The biggest problem we encountered while installing this new Sound Blaster was a problem with the drivers in Windows Vista. At first setup, the OS would not recognize the card. We had to reinstall everything (did not take too long thankfully) and the second time, the card was identified. During our research on this issue, we found that most people having issues with the X-Fi Titanium are Windows Vista users, so hopefully we will see improvements with the next-gen Creative drivers.

Now for the technical gobbledygook, with talk of all the incredible features and things the card can do (no, I don’t understand alot of this either):

We ran a benchmark during play of our favorite current title, the MMO Age of Conan. We ran the FRAPS benchmark utility in three separate trials per mode and then averaged each together. Our build:

Our three modes of operation were using the new X-Fi Titanium, the older X-Fi XtremeGamer (which is a PCI card), and the standard on board Asus sound chipset. Age of Conan’s audio settings were all set to MAX and all to 5.1 surround sound mode. Video settings were set to 1920×1200 with 8xAAQ, SM 3.0, and 75% slider settings. Once was all said and done, we ended up with this: 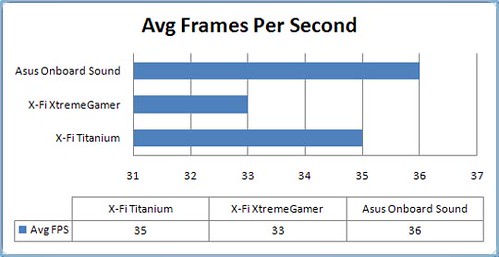 What we saw was that when it came down to sheer FPS, the on board sound card actually performed better than the new X-Fi Titanium by one frame per second, a negligible increase at best. The older X-Fi XtremeGamer fared only slightly worse, falling two frames per second behind the newer model. With these numbers, it is safe to say that the kind of sound card did not matter in this title. The X-Fi cards we used had 64MB of X-RAM each, but this did not sway the bench at all due to Age of Conan’s not taking advantage of that feature. The X-RAM has been a mixed bag with only a handful of games taking advantage of its abilities of off-loading audio to the sound card itself, freeing up more CPU cycles.

By these results, you would think we would be denouncing the X-Fi Titanium, but in reality, we are praising it for two simple reasons: Sound quality and channel separation. In our tests, the biggest thing that stuck out to our ears was that the audio coming from the newer X-Fi model was noticeably ‘crisper’ and ‘richer’ than even the older X-Fi. Additionally, the 5.1 channel separation was MUCH more defined and immersive. We can’t wait to try it out on a 7.1 channel system as soon as possible. 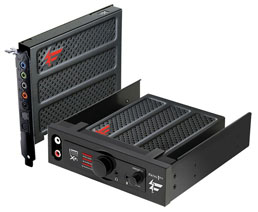 With that and the additional features that EAX, the Crystalizer, and the inclusion of Dolby Digital Live provide, it is hard not to recommend this card to gamers looking for the most immersive audio experience possible. Audiophiles will enjoy the card with all its audio-processing mojo, as will home theater PC builders, but REALLY big audio geeks (we use the term with love) might consider picking up the X-Fi Titanium Fatal1ty ‘Champion’ series card that comes with a 5.25” drive bay panel with lots of extra sweet audio ports, knobs, and switches to rub your ears all over in aural glee.

Overall, however, the Sound Blaster X-Fi Titanium Fatal1ty is an excellent sound card for your PC with the best sound quality our ears have perceived and some wicked surround sound processing. At an MSRP of $149 dollars, it won’t break your bank either.