Over the course of our history, there have been a large number of stories where heroic, legendary soldiers risk life and limb to accomplish lofty, idealistic goals for the free world. These heroes do not need thanks, payment, or anyone to know of their deeds. The characters in B-Company…Are NOT these kinds of soldiers… 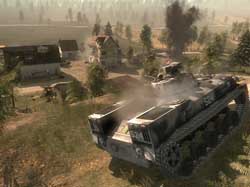 Nor are most people that altruistic. Indeed, one of the things we admire most about the single-player portion of the shooter is the bantering that goes on between your squad mates and their fairly sardonic (yet highly amusing) views on life, each other, and everything else. In Battlefield: Bad Company, you play as a new recruit to B-Company, a special four-man squad in the U.S. Army full of very skilled rejects from regular units.

Usually a multiplayer PC gaming developer, EA’s DICE studio has really outdone themselves with BF:BC, as the single-player campaign is very engaging once it picks up. The first few opening assignments are a little bland, and totally opposed to how the game ‘feels’ later on thankfully. Gameplay in the campaign is fairly straight forward. You can, of course, drive and fight from vehicles which is particularly entertaining. The combat on foot is action-packed and exciting as well. However, the best part about the gameplay are the destructible environments. Alot of games these days are touting this feature, but few have delivered like BF: BC. Nearly anything can be demolished and nearly any structure can have hole shot into it. The size of these holes is up to you. Watch an enemy soldier run for cover inside a building and surprise the heck out of him by blowing the wall up in front of him. 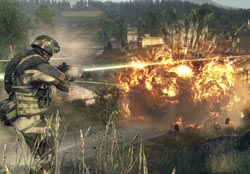 Unfortunately, the AI in the game is a bit spotty, and every so often you will find an enemy standing in the open waiting for your to blow them away. Thankfully, most of the NPCs have terrific fighting AI and can be a real challenge when you find the cover you are hiding behind had been blown away!

Some reviews have criticized the game’s graphics but we think they look great and provide plenty of depth and detail to satisfy. Explosions look terrific and powerful, and character animations are fluid. The sound effects are excellent and if you get the chance to play with surround sound you are in for a treat as the sound channel separation is calculated extremely well.

Something that should have been included but for some reason was not is a co-op campaign. Battlefield: Bad Company has a good multiplayer engine and one has a hard time understanding why a co-op campaign was not added. Sure, it might not have had all the squad banter but playing in a co-op game with your buddies would make up for it.

Overall, Battlefield: Bad Company is a strong, action-packed shooter that gives gamers plenty of explosions to keep coming back for more while not patronizing them with gratuity alone. The combination of storyline and gameplay mechanics make for a great, engaging time.