The Sudden Strike games are definitely unique amongst real-time strategy games. With an emphasis on throwing your troops towards the enemy lines and a lack of resource gathering, they fill a unique void in the genre. Fireglow’s latest in the series, Sudden Strike III: Arms for Victory, is no exception. If you think you have seen huge battles in an RTS game before, prepare yourself as you haven’t seen anything yet… 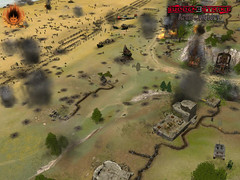 It seems as though that thing Fireglow has attempted to really capture and focus on in this title are epic-sized battles. Even the view is farther away from your units than in most RTS games. It appears as though you are looking down on the battlefield from an observation balloon for most of the time. Missions can last anywhere from thirty minutes to a couple hours if you really take your time.

This is very different from most RTS games which try to focus on quick missions and giving the player the ability to zoom in nice and tight on individual units. In SSIII, the focus is on battalion-level and above control. What this means is that you generally have to click and drag around a bunch of units at a time and issue them orders as selecting individual units is a bit clunky in the midst of all the chaos going on around them. Unlike its predecessors, however, where you essentially had to ‘throw’ hordes of your units against the enemy and hope they can pull it off, this sequel requires alot more attention to strategy to accomplish mission goals.

Unfortunately, all of this epic-scale can work against the game at times. Things get extremely chaotic trying to manage troops in multiple areas of the gigantic maps on which they fight. Units can be set to act aggressively, cautiously, or defensively which does help somewhat, but we were often left with a sense of feeling overwhelmed by the sheer amount of information we were keeping track of. Additionally, unit path-finding definitely needs some work as if you do not group and direct them carefully, they can end up getting lost fast. That, or some of your units will just take the long way while others arrive early and without the support of their lost brethren. 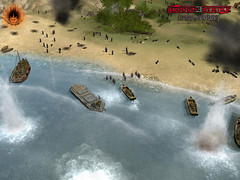 This does not mean the game is bad, not at all, just that enhancing the controls/interface somehow to allow smoother control of units across the field of battle would be welcome. In fact, when everything comes together the game is a lot of fun with tons of stuff going on at once. At its best it appears you are watching an actual historic battle unfold from your perch on high. Additionally, terrain now plays an important role in combat, giving modifiers to your unit’s attack and defense depending on factors such as cover and elevation.

Graphically speaking, this is the best looking Sudden Strike game to date, with crisp units, terrain, and effects thanks to the new Next7 graphics engine. The score is average, with the standard WWII game fare but it does the job.

Conclusion: While Sudden Strike III has its issues, the game is easily the best of the series thus far and shouldn’t be missed by fans of the franchise or large-scale RTS games in general. It may, however, be a bit overwhelming for new gamers.