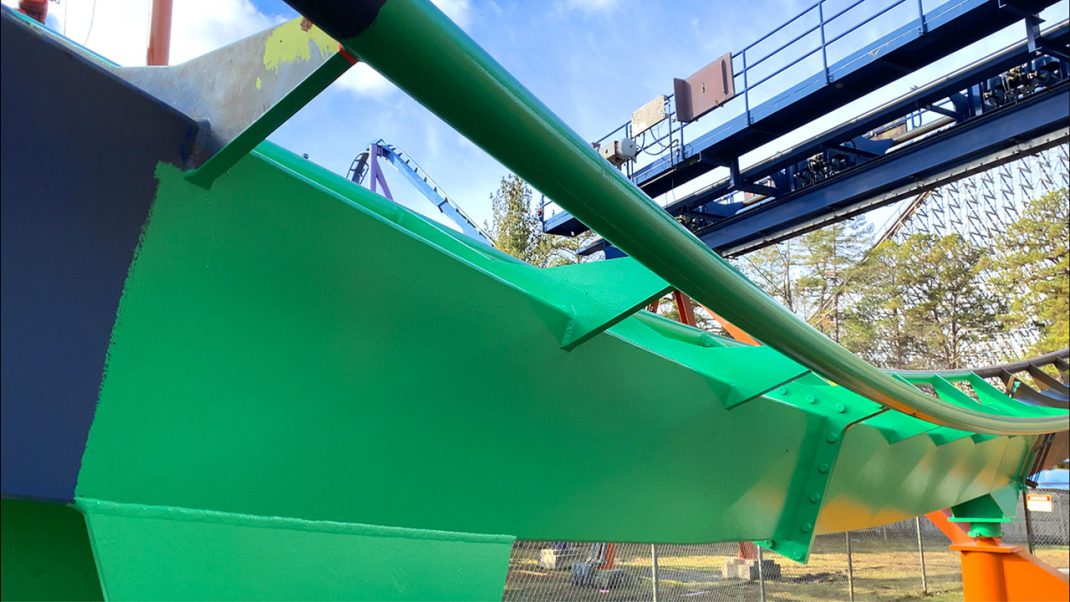 At the Six Flags Summer Vibes Festival, sun-kissed dreams will come to life as guests drench themselves in a kaleidoscope of color. The event, which will run daily July 16 through Aug. 14, will offer mouth-watering treats, beat-the-heat beverages, bold, eye-popping spectacles, photo moments, live entertainment and colorful curiosities to immerse guests in the reverie of summer.

o   Under the Sun, with its colorful umbrella canopy;

o   Summer St., the cool-down zone featuring the sights of summer in the city, including a spraying fire truck.

o   Skull Mountain Six Remix: This indoor, in-the-dark coaster will receive a Summer Vibes makeover. Guests can climb aboard as the digital DJ selects one of six unique programs that will pump party music and synchronized lights during the coaster adventure; and

o   Showcase Vibes: Guests can enter the theater for a unique and interactive experience with lights, sound and fun photo opportunities.

o   M&M’S® DJ booth with performances by air dancers to bring to the life the incredible power music has to bring people together, as part of M&M’S mission to create a world where everyone feels they belong;

The myth and legend of the snake-haired Gorgon Medusa begins a new chapter. Since Six Flags announced her return in March, thrill seekers worldwide have rallied behind Medusa’s homecoming to Frontier Adventures. Originally unveiled as Medusa in 1999, the world’s first floorless, top-rail roller coaster was re-branded to BIZARRO 10 years later. In 2022, this epic scream machine returns to her original form, but showcases a new color palette, logo, Gold Rush-era backstory and theming.

Discover the Lost Town of Medusa

Six Flags introduces riders to the legend of “The Lost Town of Medusa.” Depicted throughout the ride queue and on the park’s YouTube channel, the tale surrounds Greek immigrant brothers who traveled to California during the Gold Rush in 1874 — exactly 100 years before Six Flags Great Adventure opened its gates. Their harrowing quest for riches led them to Death Valley and an unforgiving town of outlaws named Exile Canyon. Earth tremors, mineshaft collapses, a rattlesnake infestation and underground coal fire plagued the outpost and its dwellers. The brothers were convinced that Exile Canyon was cursed by an evil sentinel holding sway over the settlement. Their whispers took hold and earned the town the nickname “Medusa” — the Greek word for “guardian.” The town met an unfortunate end as it was wiped off the map in a ferocious flash flood. While the brothers were never seen again, the snakes remained as a solemn reminder of the legend that gripped this doomed outpost.

Slither with Medusa through Exile Canyon

Explorers begin their adventure in the rugged Old West. Guests climb aboard open-air, pedestal-like seats sitting four across. Riders’ feet dangle above the track as they slither along a twisted mass of green steel woven through Exile Canyon.

Medusa takes riders on a pulse-quickening climb up a 146-foot lift hill (more than 14 stories). The inaugural plunge — a 13-story drop at a speed of 61 mph — symbolically sends riders back in time through a ring of mist. Guests rocket through a massive, 114-foot vertical loop, followed by a gut-wrenching 96-foot dive loop as flame bursts from the town’s coal fire explosion ignite around them.

Slithering into a dramatic heart line camelback (or zero-gravity roll) then into a cobra roll (two inversions) a frightening 78 feet above the ground, the churning, coiling adventure continues with a nearly 90-degree, high-speed helix (or horizontal loop). Riders experience negative Gs as they fly over a speed hill and end their voyage with two interlocking corkscrews which coil around a massive mining auger. Medusa’s wrath consumes riders for a relentless three minutes and 15 seconds.

Medusa operates daily while her transformation nears completion. This fall during Fright Fest, the legend will continue as the restless spirits of the Batos brothers haunt Frontier Adventures in a western showdown against Medusa.

Six Flags Entertainment Corporation is the world’s largest regional theme park company and the largest operator of waterparks in North America, with 27 parks across the United States, Mexico, and Canada. For 60 years, Six Flags has entertained millions of families with world-class coasters, themed rides, thrilling waterparks and unique attractions. Six Flags is committed to creating an inclusive environment that fully embraces the diversity of our team members and guests. For more information, visit www.sixflags.com.

Six Flags Great Adventure is the World’s Largest Thrill Park with world-class, award-winning rides like Kingda Ka, Nitro, El Toro and Jersey Devil Coaster. The park offers two areas just for the littlest guests and great family rides for the whole family, plus entertainment, shopping, and a wide variety of dining options. Its Wild Safari Drive-Thru Adventure is one of the largest self-guided drive-through safari outside of Africa and gets guests up-close to more than 1,200 animals from around the globe in the privacy of their own vehicles. Six Flags Hurricane Harbor is one of the Northeast’s largest waterparks with more than 25 refreshing attractions for the whole family. www.sixflags.com/greatadventure