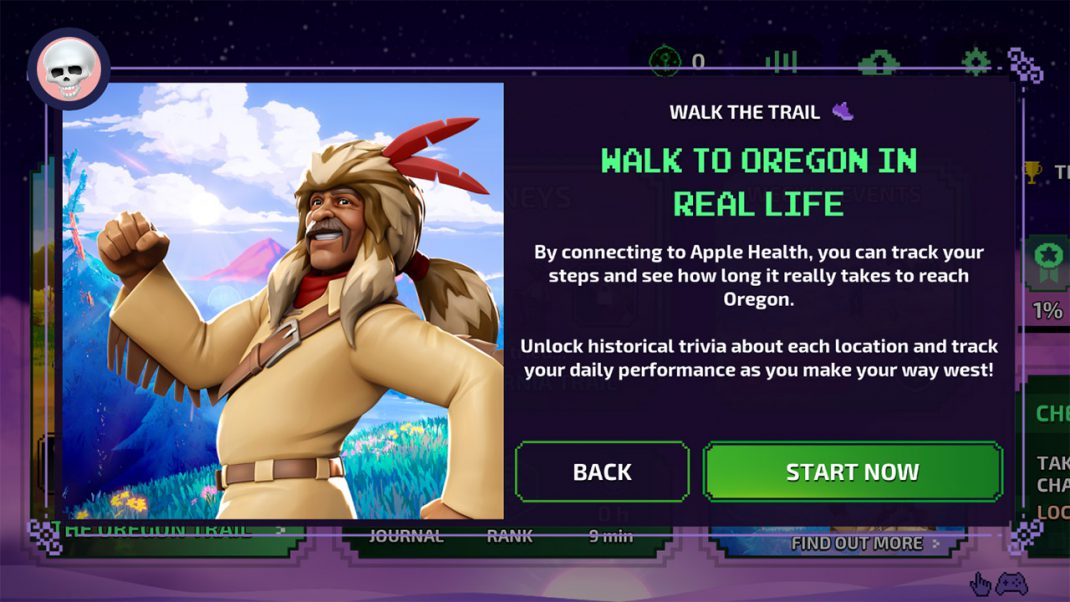 In a first of its kind experience, players can load up The Oregon Trail on Apple Arcade and transform their daily walks and runs, or wheelchair pushes, into a westward journey across a digital United States. With the all-new The Oregon Trail: StepTracker app for Apple Watch, players can set their own pace, walking, running, or wheeling in a way that best suits their daily routine.

Players will find more than just a simple step tracker: other features include digital representations of real-world locations, statistics and progress data, daily summaries, avatar customization, in-game rewards, and more. Players can walk the full 2,000 miles of the Oregon Trail, with five journey legs, 64 locations, seven forts, 15 river crossings, and eight pony express stations, meaning there is a lot to see and do as they “journey” along the trail. The impressive graphics of The Oregon Trail are also front-and-center, with players able to see the animated environments change as they follow the trail from Independence to Oregon. If players walked 10,000 steps every day, it would take more than a year for players to complete this epic journey.

“By utilizing Apple Health, we can confidently say the original walking simulator branches out of being just a game, into a method for players to follow the path of The Oregon Trail with their own steps. We think it’s a great way for people to better understand those who made this journey, all while taking strides towards enhancing their own health and fitness,” said David MacMinn, Game Manager of Gameloft Brisbane.

The Oregon Trail StepTracker App for the Apple Watch can be downloaded here: https://apps.apple.com/us/app/the-oregon-trail-steptracker/id1624436365