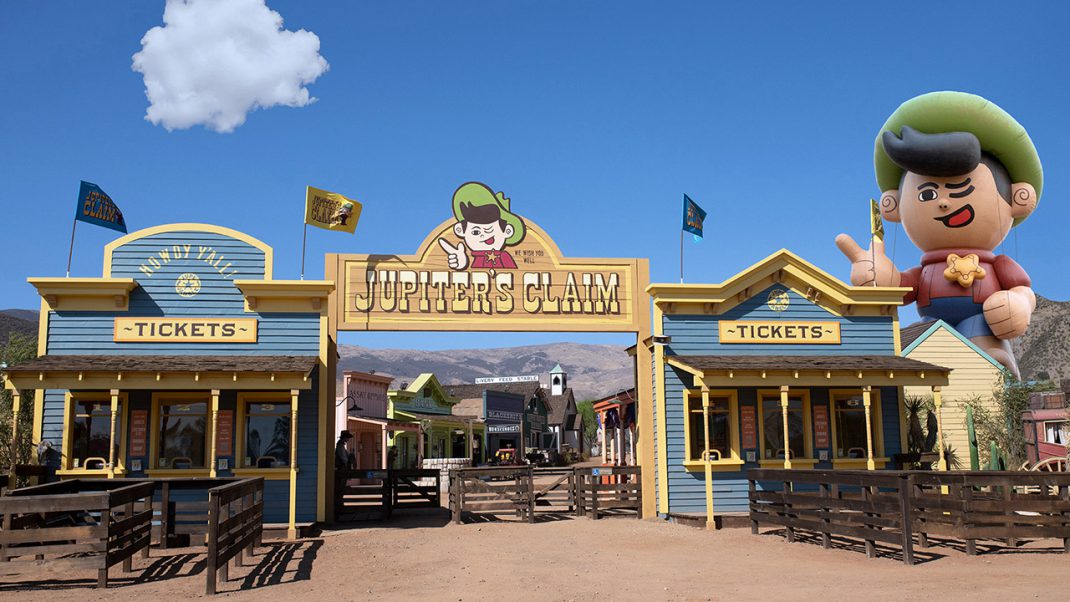 The original Jupiter’s Claim set from Jordan Peele’s expansive new horror epic, Nope, will be featured exclusively at Universal Studios Hollywood as a new attraction on the world-famous Studio Tour, beginning Friday, July 22, in tandem with the theatrical release of the new summer event film from Universal Pictures and Peele’s Monkeypaw Productions.

The impressive and elaborate Jupiter’s Claim set was created by Production Designer Ruth DeJong, then carefully disassembled post-production and transported to Universal Studios Hollywood where it was meticulously reconstructed on site, complete with original props and details from the film.

Jordan Peele, alongside producing partner Ian Cooper and Monkeypaw Productions, is thrilled to bring the film’s fictional theme park to Universal Studios Hollywood as a permanent Studio Tour attraction.  Concepting the integration of the set to the Studio Tour began early in production in partnership with the filmmakers, working collaboratively with Universal Creative at Universal Studios Hollywood to ensure authenticity and accuracy.

The Jupiter’s Claim set – which can only be seen on the Studio Tour – marks the first time that a Studio Tour attraction has opened day and date with a movie release.  It will be staged within Universal Studios’ backlot alongside a host of other iconic movie sets that include Steven Spielberg’s War of the Worlds, the infamous Psycho house from Alfred Hitchcock’s Psycho and Courthouse Square from Robert Zemeckis’ Back to the Future.

“I remember visiting Universal Studios when I was 12 years old and being mesmerized. That experience reinforced my passion and drive to someday join in on the meta-magic of ‘backlot life.’ Since then, I’ve been fortunate enough to direct three movies for Universal,” said Jordan Peele. “It is a privilege to honor these collaborations with my studio partners, crew members and cast, and to be able to share Jupiter’s Claim with fans.”

“We’re thrilled to collaborate with Jordan Peele and bring a piece of his innovative film to Universal Studios Hollywood for our guests to experience,” said Scott Strobl, EVP and General Manager, Universal Studios Hollywood. “Jordan’s creativity and ingenuity have produced unique, thought-provoking movies, and we couldn’t be more excited to showcase his original Jupiter’s Claim set as a permanent centerpiece attraction on the Studio Tour, giving our guests a front row seat to authentic movie-making magic.”

Jordan Peele disrupted and redefined modern horror with the Universal blockbusters Get Out and then Us. Now, he reimagines the summer movie with a new pop nightmare. Written, directed and produced by Peele, Nope reunites the filmmaker with Oscar® winner Daniel Kaluuya (Get Out, Judas and the Black Messiah), who is joined by Keke Palmer (Hustlers, Alice) and Oscar® nominee Steven Yeun (Minari, Okja) as residents in a lonely gulch of inland California who bear witness to an uncanny and chilling discovery.

Jupiter’s Claim, set in Southern California’s Santa Clarita Valley, is a family-fun theme park and predicated on the white-washed history and aesthetics of the California Gold Rush. Owned and operated with evangelical pride by former child star Ricky “Jupe” Park, Jupiter’s Claim becomes a pivotal location as the characters seek to investigate mysterious, unexplained phenomena, leading them toward increasing danger and terrifying consequences.

The Studio Tour is renowned for taking guests behind-the-scenes of an authentic movie and television production studio. With the exciting addition of the Jupiter’s Claim set from Nope, coupled with the progressive roll out of electric Studio Tour trams, a summer of fun is just beginning at Universal Studios Hollywood.

Following the success of Get Out and Us, Jordan Peele signed an exclusive deal with Universal Pictures and Universal Studio Group for film and television projects.  NBCUniversal has created a vibrant, interconnected brand ecosystem that allows its filmmaking partners to leverage their creative visions through expressions across its broad portfolio, including content throughout the company’s numerous platforms and Symphony campaigns.

The company’s commitment to leveraging its resources to evolve its film and television programming from cultural moments to 365-day evergreen franchises that allow fans to engage through content extensions, branded experiences, irresistible products and games and truly immersive theme park attractions or integrations, resulted in this groundbreaking partnership at Universal Studios Hollywood tied to Nope.

On July 22, fans can experience Nope on its opening weekend at Universal CityWalk’s state-of-the-art Universal Cinema, an AMC® Theater, before heading to Universal Studios Hollywood to see the original set from the film. After all, this is the place to see movies, where movies are made.