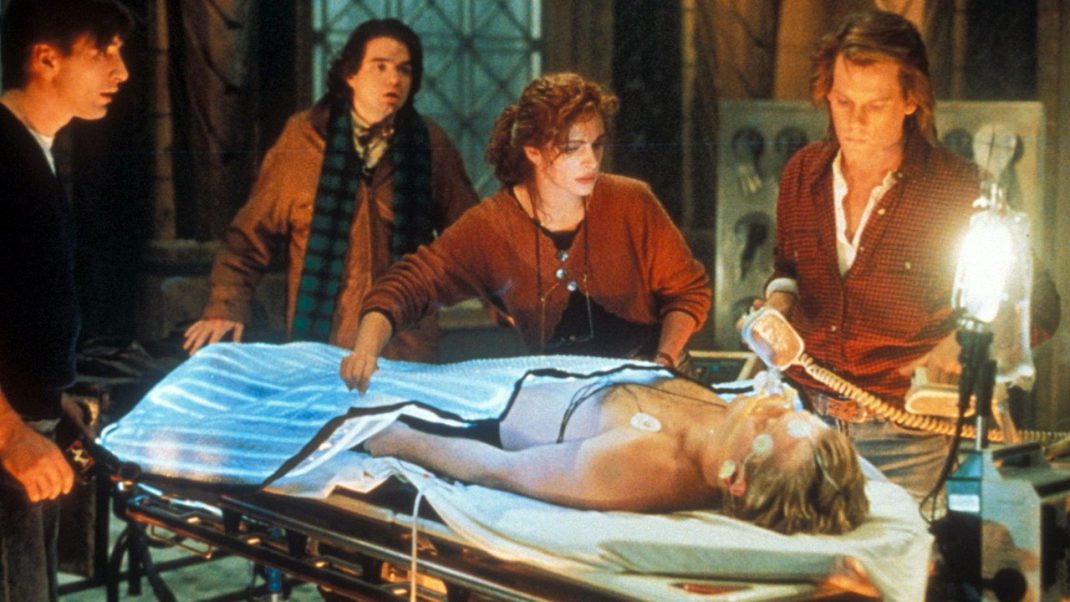 This summer, Arrow unleashes two more stunning titles that film fanatics will want to add to their collection. Released on August 2, Joel Schumacher’s early ’90s classic, Flatliners, packs a punch with its powerful, all-star cast and themes of life and death.

Five young and ambitious students (Kiefer Sutherland, Julia Roberts, Kevin Bacon, William Baldwin, and Oliver Platt) dream of changing the world by answering the question everyone has thought about at least once – what awaits us when we die? The students develop an experiment that allows them to enter into a “near-death” experience. Unfortunately, this brings dark consequences as past tragedies begin to jeopardize their lives.

Flatliners has been lauded for its striking visuals and stellar cast. Famed critic Roger Ebert praised the film as “an original, intelligent thriller” while applauding the cast for having the “right mixture of intensity, fear, and cockiness.” Rita Kempley of The Washington Post adored the film, calling it “a heart-stopping, breathtakingly sumptuous haunted house of a movie.”

Arrow will be releasing Flatliners on 4K UHD Blu-ray and Blu-ray. Each release features a brand-new 4K restoration from the original negative, approved by the director of photography Jan de Bont. Each release will include enough new bonus content to fill a body bag. First pressings will include an illustrated collector’s booklet featuring new writing on the film by Amanda Reyes and Peter Tonguette.

Next, on August 30, Arrow will release the Running Out of Time Collection. This 2-disc set includes two stunning Hong Kong action thrillers from director Johnnie To.

In 1999’s Running Out of Time, Andy Lau stars as a cancer-ridden criminal who challenges a police negotiator (Lau Ching-wan) to a 72-hour battle of wits and courage. The film was a smash hit, earning six nominations at the 19th Hong Kong Film Awards including Best Film and Best Director. For his performance as the complicated criminal, Lau took home the award for Best Actor. Running Out of Time delivers “invigorating suspense and inventive twists (Hong Kong Digital).”

Two years later, Ching-wan returned to the role of Inspector Ho Sheung Sang in the “constantly entertaining” (Far East Films) 2001 sequel, Running Out of Time 2. In this go-around, Ching-wan battles wits with a clever criminal (Ekin Cheng) that has plans to extort money from a wealthy businesswoman (Kelly Lin). Much like its predecessor, Running Out of Time 2 was well-received, earning five Golden Horse Awards nominations, including wins for Best Action Choreography and Best Film Editing.

This 2-disc set includes an abundance of bonus content, new and archived. Special features include brand-new audio commentary tracks for each film with Hong Kong film expert Frank Djeng and the 2003 documentary Hong Kong Stories. This breathtaking box set serves as the perfect entry point into the works of Johnnie To and modern Hong Kong action cinema.