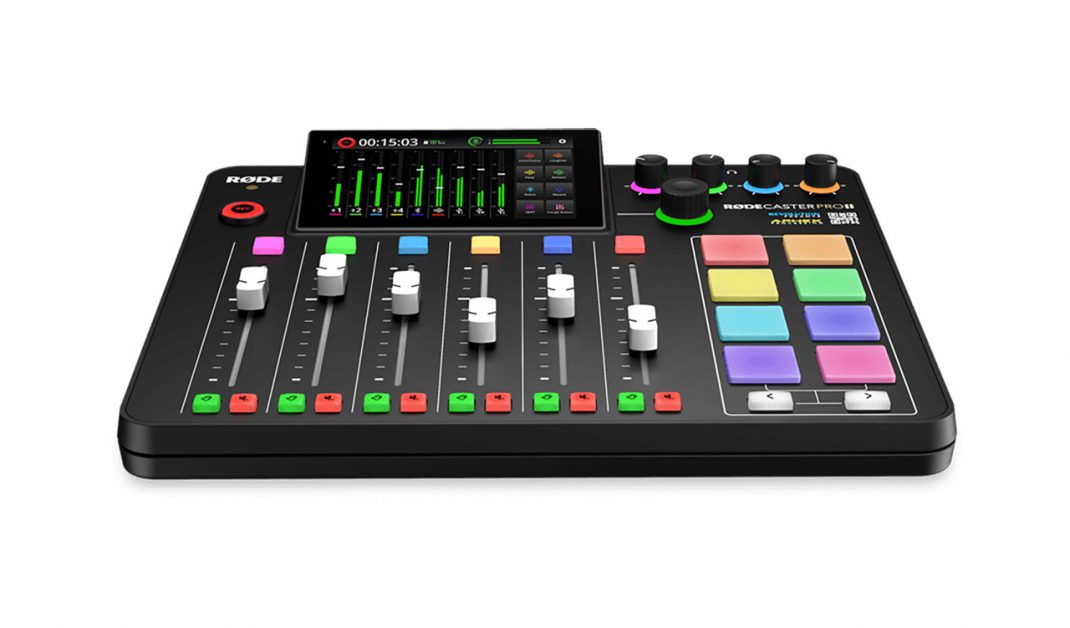 RØDE has unveiled its most revolutionary audio innovation to date: the RØDECaster Pro II. A fully integrated audio production studio for content creators of all kinds, the RØDECaster Pro II offers a plethora of groundbreaking features that have never been seen before in a single console. Combining superior sound quality with unmatched ease of use and endless customisability, it is the world’s most powerful all-in-one audio solution for streamers, podcasters, musicians, and other content creators.

RØDE revolutionised podcasting when the original RØDECaster Pro was launched in 2018, continuing a legacy that traces all the way back to the release of the world’s first podcasting microphone, the Podcaster, in 2004. Ingeniously combining all the elements typically found in a professional broadcast studio into a single easy-to-use console, the RØDECaster Pro was yet another world-first from RØDE. From beginners to seasoned creators, the RØDECaster Pro allowed anyone to create high-quality recordings with ease and has since become the go-to recording console for the world’s podcasters. It has also continued to evolve since its inception, with regular firmware updates delivering enhanced performance and cutting-edge features for not just podcasters, but gamers, livestreamers and other content creators. Now it’s time for the next chapter in the RØDECaster Pro story.

“The RØDECaster Pro marked a monumental step forward in creative audio technology,” says RØDE CEO Damien Wilson. “It was a truly groundbreaking innovation, the likes of which had never been seen before, and it has had a significant impact on the growth of podcasting over the last four years. When developing the RØDECaster Pro II, we went in with a similar mindset to the original: we wanted to create something truly revolutionary once again, but this time our focus was all creators, not just podcasters. We designed it completely from the ground up to deliver unprecedented performance and complete adaptability in any creative application, from gaming and streaming to music production. And, of course, it’s still the most powerful podcasting console available. This is not simply an evolution of the RØDECaster Pro. It’s a completely new beast unlike anything you’ve seen before.” 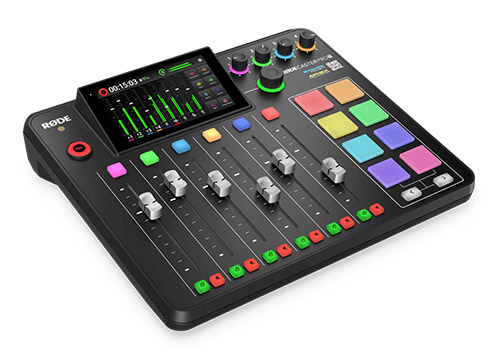 The RØDECaster Pro II offers an unparalleled feature set designed to make any creator sound exceptional every time they hit record. It has four studio-grade Neutrik® combo inputs for connecting microphones as well as instruments, including guitar, bass, keyboards and other devices, unlocking a new world of creative possibility. Each input features RØDE’s ultra-low-noise, high-gain Revolution Preamps™, which deliver pristine audio quality with any microphone or instrument. These world-class preamps were developed specifically for the RØDECaster Pro II and rival boutique designs that cost thousands of dollars per channel. With an incredibly low equivalent input noise rating of just -131.5dBV and a whopping 76dB of gain on tap, they deliver stunning clarity and transparency and eliminate the need for lifters, boosters or external processing, even with the most demanding dynamic microphones.

The RØDECaster Pro II also features a full suite of studio-quality APHEX® audio processors. These have been completely overhauled from the original RØDECaster Pro and remodelled using component-level analysis of analog units to deliver stunningly dynamic signal processing that allows anyone to capture the magic of a professional studio. A high-performance quad-core audio engine delivers significantly more processing power than any other content creation console on the market, while powerful on-board effects allow users to craft their own unique sound with unlimited creativity.

Even with these powerful capabilities, the RØDECaster Pro II is incredibly simple to use. Every feature is designed to minimise fuss and maximise creativity. The high-definition, full-colour touchscreen, combined with the tactile rotary encoder, makes navigating and controlling the console super simple. Professionally tailored presets and the highly innovative VoxLab™ processing editor allows anyone to capture incredible sound, even with no prior audio experience.

The RØDECaster Pro II is fully customisable and can adapt to any creative recording application, from livestreaming and gaming to podcasting to music production. It features nine individually assignable channels, with six broadcast-quality physical faders and three virtual faders. Any of the nine audio sources can be allocated to any fader, allowing users to design their ideal mixer configuration to suit their creative requirements and workflow.

The eight SMART pads are so much more than just sound pads; they can be customised to do everything from triggering on-the-fly voice effects like reverb, echo, robot and pitch FX, send MIDI commands to external software and hardware, activate automated mixer actions like fade-ins and fade-outs, and more. The bank switching buttons provide access to eight banks for a total of 64 unique actions at the touch of a button. The on-board effects and APHEX processors are also fully customisable, with granular on-board editing allowing users to fine-tune every parameter to suit their voice or instrument. All processing and effect parameters can be saved as presets and loaded at any time on any channel.

Every setting, from the mixer configuration to SMART pads, as well as entire recordings, can be saved on-board as a ‘Show’, allowing users to get set up and recording in seconds. This also makes the RØDECaster Pro II ideal for creators who make different types of content, multi-functional studios, or production or education facilities that require different setups for different users.

The RØDECaster Pro II offers unrivalled connectivity with a wide range of devices, unlocking more creative possibilities, more streamlined workflows, and easier integration with other equipment than ever before. It is the perfect audio control centre for any creator.

The four analog inputs can accommodate everything from a single microphone for a solo podcast to a full band for a livestream. There are also four high-power headphone outputs and ¼-inch balanced line outputs for connecting speakers for crystal-clear monitoring and playback.

Advanced Bluetooth® connectivity with wide-band speech makes recording ultra-high-quality phone calls easy and can also be used for crystal-clear audio streaming and even connecting wireless speakers. Users can record in stereo or multitrack either to an on-board microSD™, computer or external storage device, with ultra-fast data transfer over USB.

THE MOST FEATURE-PACKED AUDIO PRODUCTION SOLUTION

The RØDECaster Pro II leaves no stone unturned when it comes to features that make recording as simple and streamlined as possible. On-board audio editing, mix-minus on the Bluetooth and USB channels, bi-directional MIDI communication, ten language options, mute and listen buttons, producer talkback mode, stereo input linking with pan controls, and tailored presets for RØDE microphones and other popular models are just some of the features on offer.

This is also just the beginning for the RØDECaster Pro II – the quad-core audio engine unlocks huge potential for feature upgrades and enhancements, and the console will continue to evolve with future updates.

The RØDECaster Pro II will be launched alongside a suite of accessories, including the RØDECover 2, a high-quality protective cover, as well as a VESA mount, carry bags, coloured cables, and more.

The RØDECaster Pro II is available to pre-order now for US$699 and will be shipping in June. To find out more, head to rode.com/rodecaster-pro-ii.