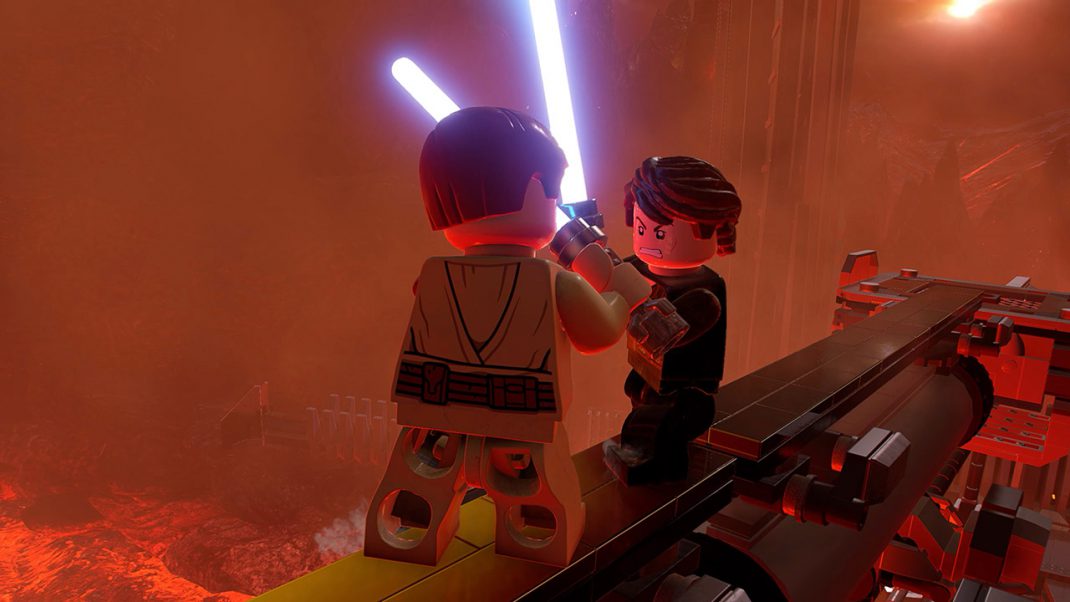 Like most self respecting thirty eight year old men, I love both LEGOs and Star Wars. They each held their separate corners of my childhood until they crossed paths in the 1999 marketing ramp up to The Phantom Menace and have been inseparable ever since. As a matter of fact, LEGO Star Wars as a sub franchise has existed for just over half of the entire history of Star Wars itself, making LEGOs almost as synonymous with George Lucas’ masterpiece as Lightsabers, Death Stars, and bodily dismemberment. However it wasn’t until 2005 that LEGO Star Wars would debut in video game form and today, seventeen years later, we have developer Traveller’s Tales magnum opus in LEGO Star Wars: The Skywalker Saga. 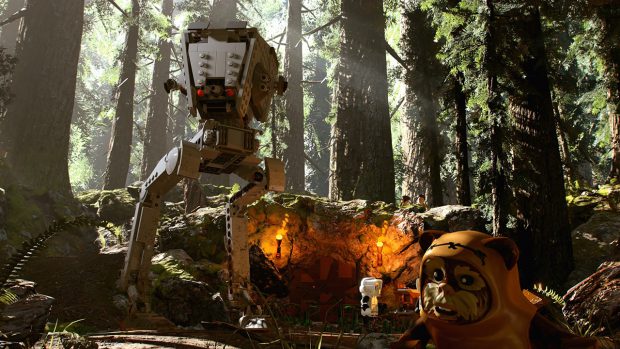 Now if you’re a cynic like me, when you first heard of LEGO Star Wars: The Skywalker Saga you likely thought this was going to be a game similar to 2007’s The Complete Saga— a simple repackaging of previously released content with few quality of life enhancements and a touch of new content to round out the story. I want to get this out of the way up front, this is absolutely not that. I’m pleased to report that The Skywalker Saga is a from the ground up plastic brick retelling of the entirety of the nine core Star Wars films and perhaps the first semi open world one at that making for a wonderful surprise for anybody who may be getting tired of the tried and true LEGO video game formula.

Much like LEGO as a brand encourages freedom of play and a blue sky creative approach, The Skywalker Saga wears a similar openness on its sleeve from the moment you start the game. Upon hitting the game’s main menu, rather than be forced down a linear path of events you can choose to play the three Star Wars trilogies in any order you want. Was your first exposure the prequels? Fantastic, start with The Phantom Menace. Are you a purist? Then select A New Hope. The only restriction is you can’t jump straight into the middle of a trilogy, i.e. you can’t play the best Star Wars film without finishing its immediate predecessor The Force Awakens first.

That freedom extends into the game itself. LEGO games have historically been played from fixed camera perspectives. Sure, the camera tends to lend itself to wider angles and some limited controllability but by and large they’ve been committed to a limited point of view and a restricted plane. While LEGO Batman 2 did allow for some open world roaming between missions, once you moved on to your next objective it was back to the tried and true formula. The Skywalker Saga breaks the licensed LEGO game mold by dropping the camera tight behind your character for a true open world action game experience. This allows for not only a closer look and greater appreciation for the detailed world and character models, but also opens up new gameplay mechanics with a brand new, fairly serviceable cover mechanic for heated gun battles like you’d find in the hallways of a Rebel Blockade Runner. 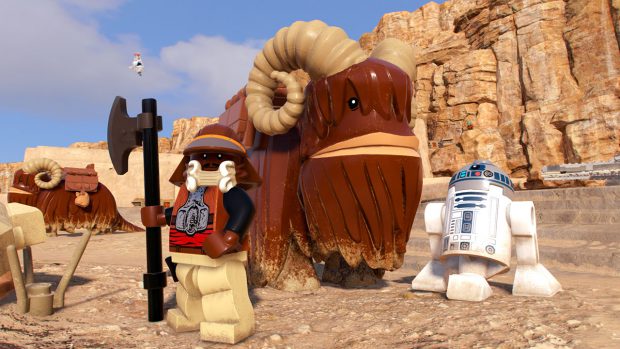 With freedom being the name of the game, its easy to get distracted in The Skywalker Saga due to the abundance of simple side missions and exploration opportunities present throughout the game. While moving from objective to objective, you’ll find plenty of NPCs to help in simple fetch quests or blocked off Metroid-esque opportunities to come back to later and retrieve a special Kyber brick, a core upgrade resource in the game. While yes, at the end of the day this is a game for kids and the side missions never really amount to much, they do lean into the typical LEGO game trope of making sure you have the right character for the task. Whether it’s swapping characters to C-3PO to understand exactly what the fish nun on Luke’s convent island is asking for or calling up Rey to use her scavenger abilities to climb to an out of the way brick, the side missions may be simple but they innovate on years worth of core LEGO game play.

LEGO games are known for their reverence to their source material through presenting countless options for playable characters. The Skywalker Saga does that and more. At nearly any point you can switch to almost any character you’ve come across and buy plenty of others using the LEGO studs you’ve collected. And these aren’t just core characters. Want to survive the Battle of Hoth as a spindly legged Droideka? Sure. Take Uncle Owen gambling in the casinos of Canto Bight? Go for it. There are close to 400 playable characters to choose from across nine upgradeable classes. Using the aforementioned Kyber bricks, acquired from side missions, challenge objectives, and completing story levels, you can level up both core stats like health across all your characters or class specific skills the rewards Bounty Hunters collect for downing enemies. In addition to swappable characters, you can also choose from over 100 different ships to pilot making this the video game equivalent of dumping out a bucket of LEGOs and going ham on the living room floor. 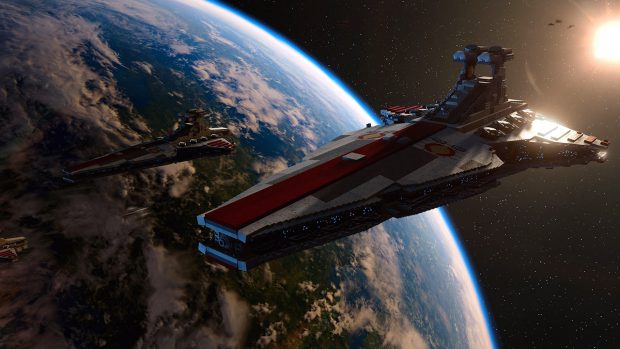 All of the freedoms that The Skywalker Saga provides would fall flat if they didn’t have the presentation to back them up. I played The Skywalker Saga on an Xbox Series X and the game ran beautifully at a native 4k/60fps without stuttering once. To top that off, the game is beautiful. At this point we’re all used to the simple character models of the LEGO franchise but The Skywalker Saga takes it to a level close to what we’ve seen in the theatrical LEGO movies. Characters are detailed right down to the LEGO branding inside their feet and the seams in the plastic where their parts were once molded. Characters also now show weathering, as outdoor environments are largely dirt, water, and mud while LEGO bricks are reserved to build structures and indoor locations. This means that throughout the beginning of A New Hope you can expect to see Luke getting sandy and some of his paint chipping off as he now looks as you’d expect a LEGO Minifig left out in the desert to wear down. Complimenting the excellent visuals is sound design that feels lifted straight from the movies. Dialogue is an indistinguishable mix of classic lines with newly produced recordings with soundalike voice actors all while John Williams’ timeless score weaves throughout.

LEGO Star Wars: The Skywalker Saga is a surprisingly deep experience that kept me coming back to scratch the completion itch which surprised me because while I’ve liked plenty of LEGO games they haven’t felt like they’ve had anything new to offer in some while. I was surprised to find that after years of a franchise that’s become a little copy and paste, this game takes key steps forward in evolving Traveller’s Tales model and has something more than just a new licensing deal. But LEGO Star Wars: The Skywalker Saga isn’t just a great LEGO game— It’s also a great Star Wars game. It provides deeply replayable recreations of key moments across the Star Wars film franchise wrapped up in both a deep love and respect for the source material balanced with LEGO’s trademark irreverent sense of humor all culminating in a game that both the oldest Star Wars fan and youngest LEGO builder can enjoy together.