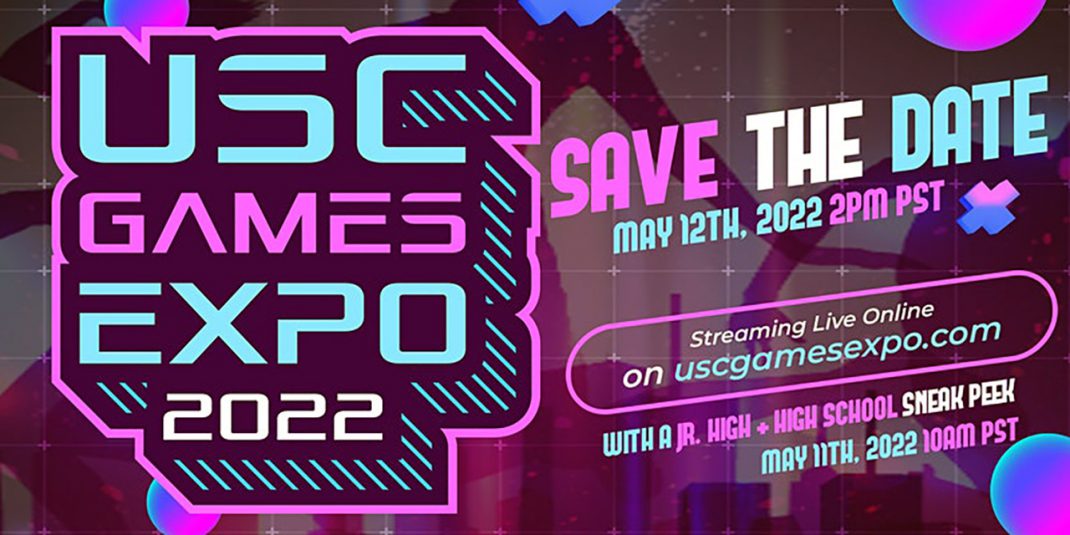 Today, North America’s No. 1 collegiate game design program USC Games announced their 6th annual USC Games Expo with support from long-term partner Jam City, a leading international game developer behind some of the world’s highest-grossing and most enduring games. The virtual event will feature up-and-coming game designers and developers from USC Games’ program, packed with world premieres of over 50 student-made games. This year’s Expo will be the third time the multi-hour event is livestreamed and will air on May 12, 2022 at 2pm PT on uscgamesexpo.com and USC Games’ Twitch and YouTube channels. IGN is the official media partner of Expo Day and will also be concurrently streaming the live virtual event.

“USC Games Expo is a unique opportunity for our students to show their skills in game development, the challenges they’ve faced, and share the results of their hard work with the world,” said Danny Bilson, Chair of the USC School of Cinematic Arts’ (SCA) Interactive Media & Games Division (IMGD), and Director of USC Games. “We’re very excited for our Trojan family and our friends at Jam City to join us for another showcase featuring the talented game designers and developers of tomorrow.”

“We are continually wowed by the creativity and innovation that comes out of USC’s game program. It undoubtedly deserves its spot as North America’s No. 1 collegiate program and we are so proud to continue to sponsor and support the USC Games Expo each year,” said Chris DeWolfe, Co-Founder and CEO of Jam City. “The incredible talent this program hones and produces will undoubtedly usher in the games of the future.”

The USC Games program, a truly interdisciplinary program shared between the School of Cinematic Arts and Viterbi School of Engineering’s, champions diversity, equity and inclusion with 48% of program students identifying as female and initiatives like the Gerald A. Lawson Endowment Fund for Black & Indigenous Students, to catalyze the inclusion of underrepresented voices in the games industry.

USC Games will feature the best games of the past year both at the Expo on May 12 as well as give a livestreamed “virtual field trip” for junior high and high school students and their families on May 11, prior to the official show. On Expo Day, eight projects developed in USC Games’ capstone course, the Advanced Games Program (AGP), will be featured with their first hands-on showcase.

Those featured AGP titles include:

1. Bounty Heart (Mobile iOS/Android)
Bounty Heart takes you on a journey through a fantasy world full of quirky characters, renegades, and outlaws. Devise the best strategy to match orbs, recruit allies and defeat enemies to obtain the legendary bounty in Bounty Heart.

2. Charon (PC)
Charon is a single player action-adventure game where the player traverses the perilous River Styx as the ferryman of the underworld. They must utilize weapons and maneuverability to survive raging rapids, vengeful spirits, and the goddess Demeter’s onslaught of monsters to bring the lost soul Alexis to her lover in the afterlife.

3. Impasto (PC)
Impasto is a dark fantasy adventure inside the macabre imagination of the legendary Spanish painter Francisco Goya. Step inside the world of his paintings and unravel the mystery and the tragedy of the man who painted them directly onto the walls of his home.

4. Skylost (PC)
On a rescue mission, brave the mysteries of Spire, a series of beautiful, mysteriously floating islands that few have dared travel to and even fewer have ever returned from. Armed only with your wits, limited supplies, and the items you discover during your journey, traverse the exhilarating verticality of this gravity-defying wilderness. Craft, climb and glide your way past the Spire’s hazardous flora and fauna, reach the top, and find your lost missing love, Amelia before she—like so many before her—is lost forever!

5. Social Moth (PC)
Social Moth is a game that explores social anxiety. As Moth, you can explore vibrant environments, get to know your neighbors, and attend a party while coping with your desire to avoid social interactions. Developed with input from subject-matter experts, help the Moth manage his anxiety while making friends with the insects in his neighborhood and keep his thoughts under control to avoid the dreaded Anxiety Monster.

6. Spookulele (PC)
When a fabled disaster causes ghosts to spill into the human world, an apathetic reaper and a fearless young girl with magical powers must use their musical abilities to fight ghosts and save the world from an endless night. Spookulele is an action-adventure game where you play a pair of reapers and use musical abilities to fight ghosts.

7. That’s Not How it Happened (PC)
Disaster! When the Turner family’s inn burns down, they must recall the events that took place leading up to its fiery end, and ultimately explain HOW IT HAPPENED…That’s Not How It Happened is a rashomon-style beat’em up-point-and-click-dating sim that explores different art styles and game mechanics to show each character’s unique perspective. Follow George, Alan, and Zoey Turner as they try to decide who saved(?) the day!

8. Turtle Town (PC)
When the whimsical forest of Brightleaf Hollow is threatened by rogue mechanical animals, it’s up to you, to assemble, and protect a town of forest animals finding refuge on the shell of Tortimer Turtle. In this unique base builder on the move, every building you construct changes the way you explore the forest and every encounter in the forest will change the way you build and protect your city.