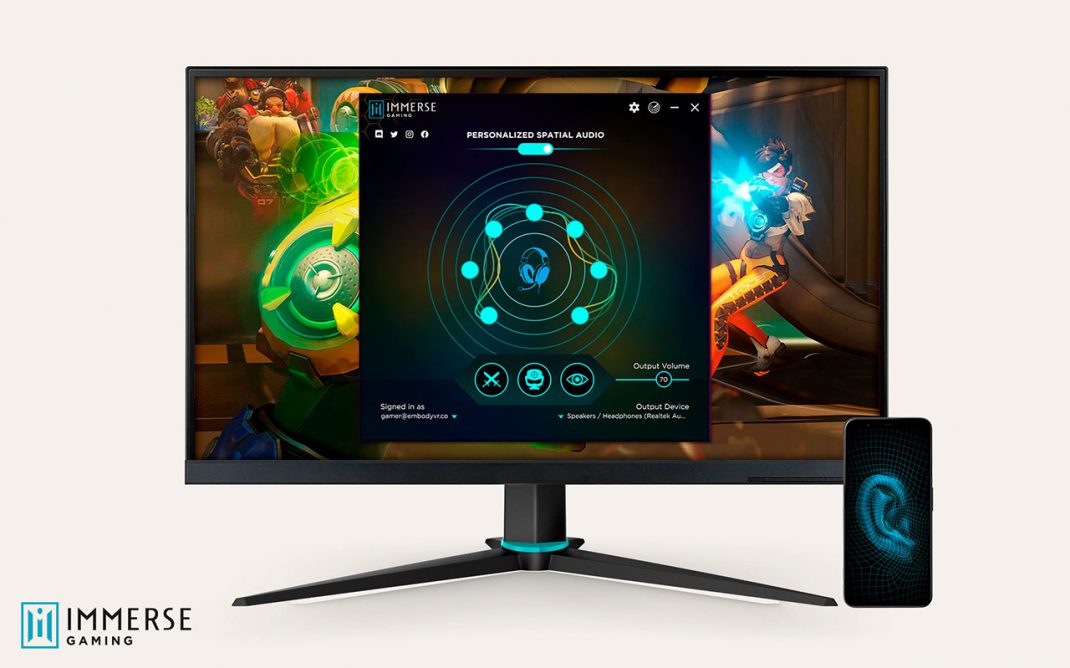 It’s understandable that gamers want the best audio possible, but high-end headphones can also be very expensive. To give gamers with headphones of all kinds a custom-tuned virtual spatial audio experience, Embody has introduced Immerse Gaming | Hive. How does this work though? 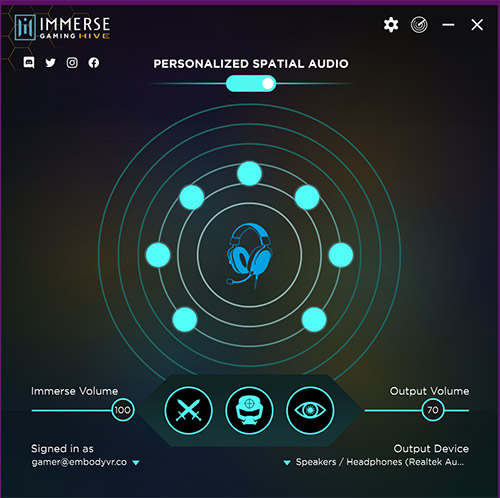 To start off, you read a QR code with your cell phone that takes you to a page that helps you take a picture of your right ear. Seriously – a picture of your EAR. It may seem weird at first, but how a person hears things is greatly tied to the shape of a person’s ear. That’s why Embody uses the term “Acoustic Fingerprint” to describe it. The shape of the curves of your ear, jewelry, anything that can effect the surfaces of your ear that reflect sound are taken into consideration. Then a profile is built by the world’s only AI-assisted spatial audio PC gaming software so that when you play certain kinds of games the sound will seem to come from different directions around you instead of just traditional left or right. The only apparent requirement is that your headphones have to be stereo, the basis of everything is still the left and right channels.

In selecting headphones to try the software with, I used everything from my Razer Banshee to a little green pair of dollar store headphones that are completely cheap and generic. I used open cup, closed cup, in ear, open over-ear pads with USB, audio jack and jack adapted to USB. It comes in handy at moment’s like this that I am a bit of a hoarder when it comes to my electronics though I fear Mrs. Ripper would still rather I wasn’t… If you have a newer set of headphones then Immerse Gaming | HIVE might already have a profile waiting for you, all big names and top sellers are in there and if you don’t choose one the software tries to detect it if it has a brand.

Once you decide that you need to pick the profile that best fits what gaming you plan to play. But, don’t worry as there are only a few choices and you can change them if you feel a different one suits better or you change games. They basically break down to FPS, MMORPG, MOBA, RPG, Racing, and Fighting. You can hover over the buttons to know exactly what they work for but you may find yourself adjusting it on the fly which is really easy. So say you are doing a FPS and the small “sonar” overlay shows where all the enemies who are firing are located directionally and you get an objective that involves everyone stabbing each other you might want to switch to “Close Quarters” mode that is normally for fighting and racing games but will help you if there are folks who want to stick you just as bad as you want to stick them.

Did I say sonar? Yes I did! There is a little overlaid map that can be made as transparent as you like and lock/unlockable and on it you can see which direction the sounds are coming from. The main purpose of Immerse Gaming | HIVE is to improve your sound experience regardless of audio gear quality which it truly does well. I was often able to close my eyes for a moment in a shoot out or battle amongst the stars and have a good idea where the sound is coming from not just left and right but forward, forward sides, back and backsides. It lives up to that challenge quite nicely. I threw my Banshee at it and everything right down the line and it did a great job.

But… back to the sonar. It is, by far, my favorite feature. If you are on a map with guns shooting all over the place and planes dropping bombs the better you can tell where those sounds are coming from the better off you will be. I can even see using the Close Quarters detection if it’s a smaller map and I want to get a good feel for the guy running around the map with a knife like Jack the Ripper (especially if it isn’t me for a change). I could see setting my audio back to my speakers while playing if I don’t feel like wearing headphones and the software will still try to improve the sound location (if it isn’t working well you can turn it off). I might still leave the HUD on though so that I have a better idea where everyone is even without wearing the headgear. Of course if you prefer you can move the HUD or remove it entirely and just use the AI audio features if you prefer that way.

When it comes to problems or issues, there really aren’t any. The software lives up to its boasts and handled everything I threw at it. The only thing that concerns me is that the technology is a subscription-based service. Pricing clocks in at $14.99 a year or $39.99 for 5 years. Considering how many different games it can improve that price is not bad, but you probably need to think about whether you think you will use it for more than 3 years where the longer term is the better deal. 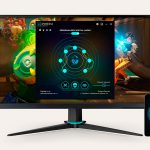