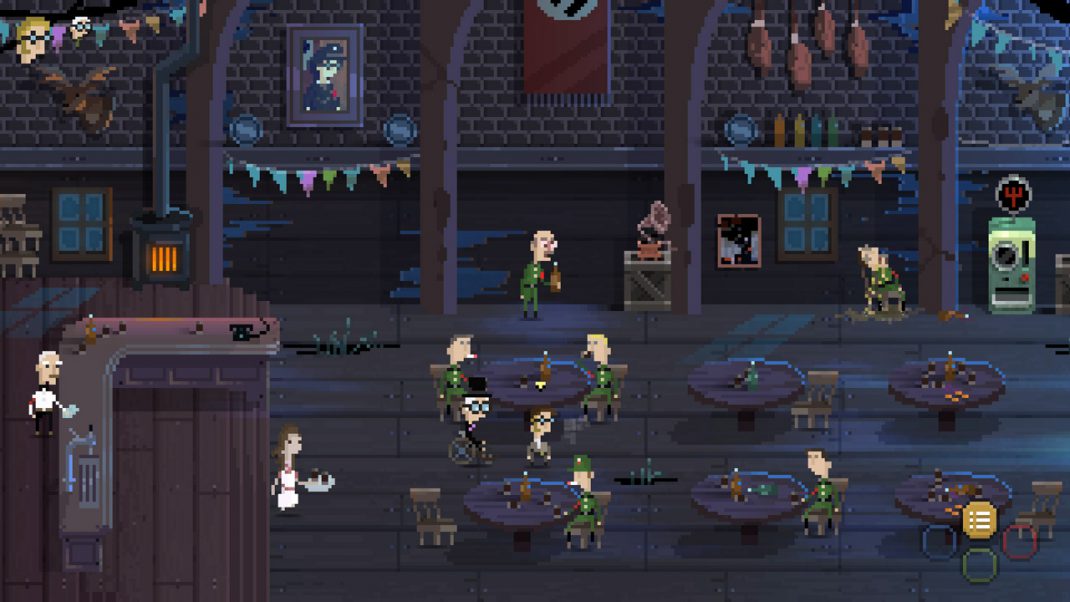 As World War II nears its climax, air raids and artillery shells are the least of Sundäe’s concerns. The remote Norwegian village, home to the delicious three-testicled salmon, has caught the interest of the Third Reich’s Okkulte-55 Division, who are keen to exploit this supernatural hotspot and turn the tide of battle in Germany’s favor. Enter two unlikely heroes: Professor Alexei Krakovitz, a Russian paranormal scholar, and his trusty assistant, Akiro Kagasawa, who must save the day before the Nazis literally raise Hell.

Explore the Scandinavian hamlet and surrounding region, swapping between Krakovitz and Kagasawa to search for intel about the Okkulte-55 Division’s schemes. Interact with more than 50 characters, each more colorful than the last, while uncovering clues to help stop the Third Reich’s dark designs. Traverse the astral plane as Professor Krakovitz, communing with long-departed spirits to learn more about the strange and otherworldly history of Sundäe, or harness Kagasawa’s special combat training when faced with corporeal threats.

Savor the distinct, jocose culture of Sundäe and its residents on a winding journey punctuated by amusing quips, absurd comedy, and finely-crafted pixel art. Experience a narrative inspired by history and infused with paranormal realism that balances heart and humor in equal measure. Leave no stone unturned while uncovering the truth about the Okkulte-55 Division, what is happening in Sundäe, and the supernatural world that exists all around us.

“Nine Witches: Family Disruption is the combination of my lifelong interests in world history, the supernatural, and comedy,” said Diego Cánepa, designer, Indiesruption. “I’m enchanted to plot alongside Blowfish Studios to summon this absurd look at the occult side of World War II to Nintendo Switch, PlayStation 4, Xbox One, Steam and GOG on Dec. 4, 2020.”

“Beep is very excited to bring Nine Witches to Japan for fans who like indie games with a special twist,” said Robert Pontow, Executive Director, Beep Company. “We know that this game will amuse many players with its interesting and humorous storyline as well as its cast of quirky characters. We look forward to Japanese gamers experiencing Nine Witches soon.”

Nine Witches: Family Disruption will be available on Nintendo Switch, PlayStation 4, Xbox One, and Steam and GOG for Windows PC on Dec. 4, 2020 for $19.99 USD / €17.99 / £15.99. It features English, Spanish, German, French, Brazilian Portuguese, Russian, and Simplified and Traditional Chinese language support.