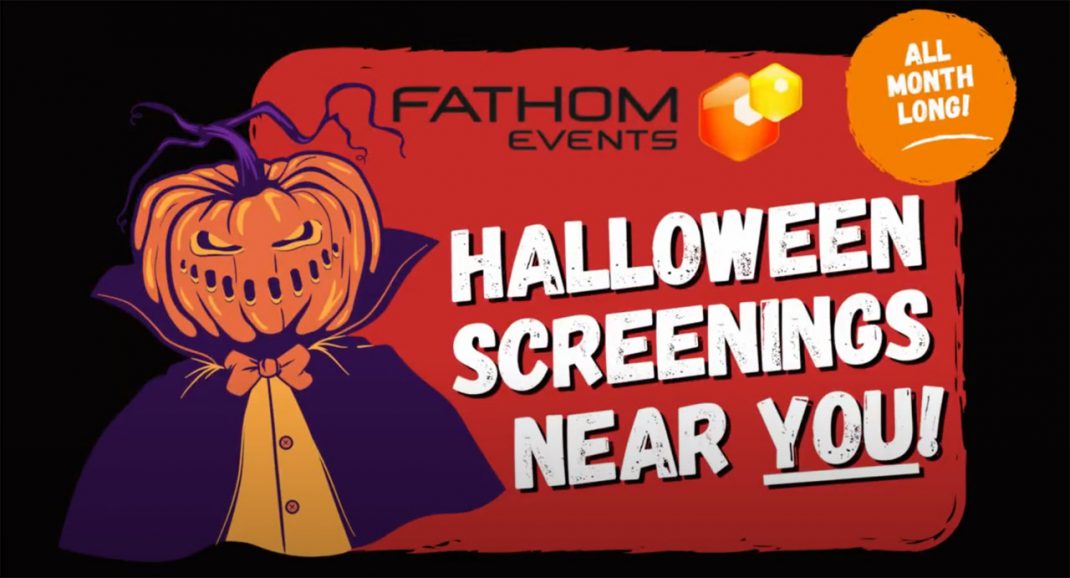 It’s the spookiest month of the year. As we countdown to Halloween, Fathom Events has a month of scary, suspenseful, and super-fun features coming this October – seven in all. So, gather your ghouls & head on down to your local cinema. Load up on candy & distance in the dark. There’s something for everyone at the movies from Fathom Events.

Fathom recently kicked-off the October festivities with one of the most popular horror films of all time, “Friday the 13th 40th Anniversary,” which continues on the on the 9th and 10th. Next up is TCM’s Big Screen Classic’s series presentation of “Psycho” 60th Anniversary (The Uncut Version), followed by TCM’s “The Shining” 40th Anniversary, “Memories of Murder” from Academy Award® winning director Bong Joon Ho, “RiffTrax: Jack-O” from the stars of the classic MST3K, and TCM’s “Ghost” 30th Anniversary. The month concludes with a presentation of the Academy Award®-winner Danny Boyle-directed, National Theatre Live staging of “Frankenstein” (2020 Encore) with Jonny Lee Miller and Benedict Cumberbatch.

One of the most shocking films of all time, Alfred Hitchcock’s Psycho changed the thriller genre forever. Join the “Master of Suspense” on a chilling journey as an unsuspecting victim (Janet Leigh) visits the Bates Motel and falls prey to one of cinema’s most notorious psychopaths – Norman Bates (Anthony Perkins). Named No. 1 on the AFI’s “100 Years…100 Thrills” list, this notorious film has become a cultural phenomenon. Be prepared to see one of the scariest movies of all time at a special event that includes the uncut version of the film and exclusive insights from Turner Classic Movies.

When writer Jack Torrance (Jack Nicholson) –who has a history of alcoholism and child abuse–takes a job as winter caretaker for a hotel high in the Rocky Mountains, he, his wife (Shelly Duvall) and their psychic young son will be isolated until spring. But once the first blizzard closes the road out, the accumulated power of evil deeds committed at the hotel begins to drive Jack mad. Now there may be no escape for his wife and son in this haunting madness, memory and family violence. This anniversary event also includes exclusive insights from Turner Classic Movies.

Memories of Murder tells the harrowing true story of the hunt for a sadistic serial rapist and murderer terrorizing a small province in 1980s South Korea. Marking the first of many successful collaborations between four-time Oscar winner Bong Joon Ho and leading man Song Kang Ho, the film follows the paths of three increasingly desperate detectives as they attempt to decipher the violent mind of a killer in a futile effort to solve the case.

Now, seventeen years after its initial release, and a year after the real culprit was identified, this cult classic takes its place as a modern masterpiece.

The RiffTrax guys (stars of the classic Mystery Science Theater 3000) bring their comedic riffing treatment to the 1995 Halloween horror classic Jack-O. An evil warlock, “Jack the Pumpkin man,” rises from the grave to seek revenge on the descendants of the man who put him there years ago. What follows is a campy Halloween night rampage by Mr. Jack as he terrorizes the town to get his vengeance. The starts of RiffTrax, Mike Nelson, Kevin Murphy and Bill Corbett, will be your comedy guides to this fun B movie as well as lead off by riffing a cheesy Halloween safety short.

One of the most memorable romantic films ever and winner of two Academy Awards®, Sam (Patrick Swayze), living as a ghost, discovers his death wasn’t just a random robbery gone bad. To help him reconnect with the love of his life, Molly (Demi Moore), and solve his own murder, he enlists the talents of a skeptical psychic (Oscar®-winner Whoopi Goldberg), who doesn’t even believe her own abilities. Ghost is a supernatural mystery-thriller that will cross over into your heart and never leave. Ghost will surprise you, delight you, make you believe. Celebrate the 30th anniversary of this timeless romantic classic at a special event that includes exclusive insights from Turner Classic Movies.

Childlike in his innocence but grotesque in form, Frankenstein’s bewildered creature is cast out into a hostile universe by his horror-struck maker. Meeting with cruelty wherever he goes, the increasingly desperate and vengeful Creature determines to track down his creator and strike a terrifying deal.

Captured live on stage in 2011, this thrilling, sold-out production became an international sensation, experienced by almost one million people in cinemas around the world.

EVENTS FOR EVERYONE
Fathom is a recognized leader in the entertainment industry as one of the top distributors of content to movie theaters in North America, including live events. Fathom delivers a wide variety of programming and experiences to U.S. and global cinema audiences, and is the largest distributor of documentaries, faith-based and inspirational content. Fathom is also at the forefront of bringing anime, performing arts, and classic film to moviegoers worldwide.

Audiences can count on Fathom to curate and deliver exclusive entertainment at their local movie theater, giving fans of any genre the opportunity to share in unique and memorable experiences on the big screen. Fathom audiences enjoy exclusive bonus content, including live streamed Q&As and panel discussions, behind-the-scenes and never-before-seen footage, expert insights into beloved film, special messages from favorite movie and television stars, and more.