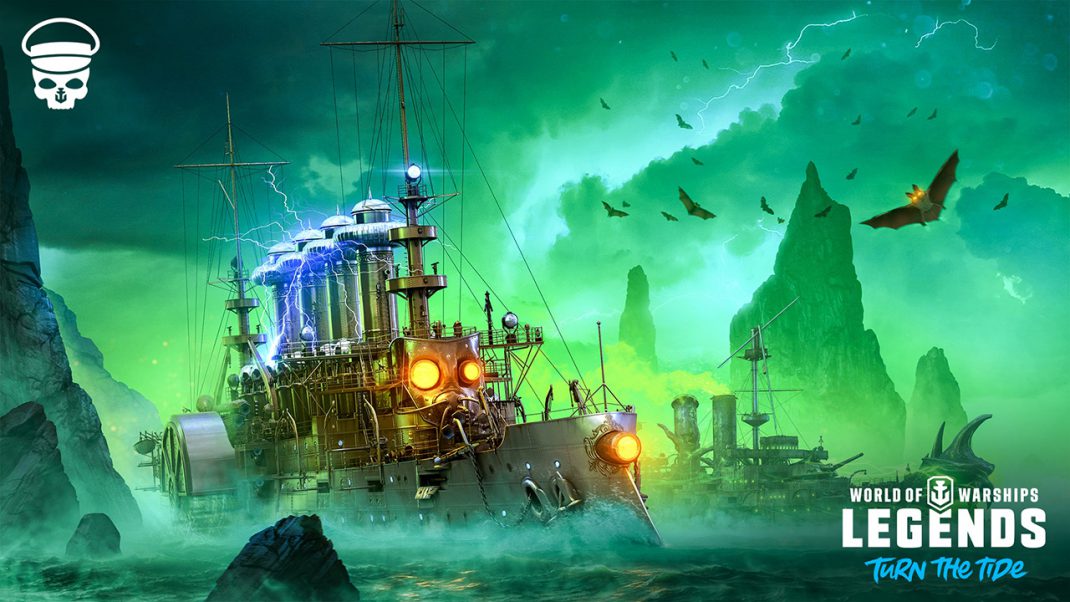 The new Wicked Waves Campaign features the Jackal, a steampunk war machine with a unique playstyle. Jackal is the free final reward of the campaign. As a Tier III German Battleship, Jackal carries twelve powerful guns all over the ship in a layout used in early battleship designs. Combined with solid armor, the Jackal is a surprisingly flexible Tier III battleship. On the way to earning her, players will receive plenty of other rewards and Halloween containers to help them in-game.

Players with Admiralty backing will receive extra rewards and a unique event commander. Featured as a German Battleship Commander, Henry J. Hide is the perfect partner to the Jackal! Clever references aside, Hide brings new and unique skills to further optimize the Jackal, making them the perfect dynamic duo. There are 45 levels in the Halloween campaign and two weeks to complete it. Jackal, Hide, and the other rewards are permanent, so go have fun and get yourself these unique items.

However, there’s more to Halloween than events and steampunk ships…

Starting October 26th, World of Warships: Legends will allow players to take part in a special event. After selecting one of three event warships and their commander partners, players can take part in a cooperative operation where they must defend the Transylvania, a ship set to save Halloween! Things will quickly go downhill, as players will be fighting against a swarm of monstrous zombie ships! There are special rewards for participating in the mission based on how many objectives players complete. Earn more Halloween containers, premium account time, and coveted universal commendations.

There will be more Halloween themed commanders and ships available in the in-game store. Some of them will only be available during the Halloween season. Event containers will have more items too, holding anything from various boosters to universal commendations for your commanders, these containers also give players a chance to receive permanent Halloween camouflage for the Wakatake or the St. Louis.
World of Warships: Legends is building steam and making headway, with more to come in the future!