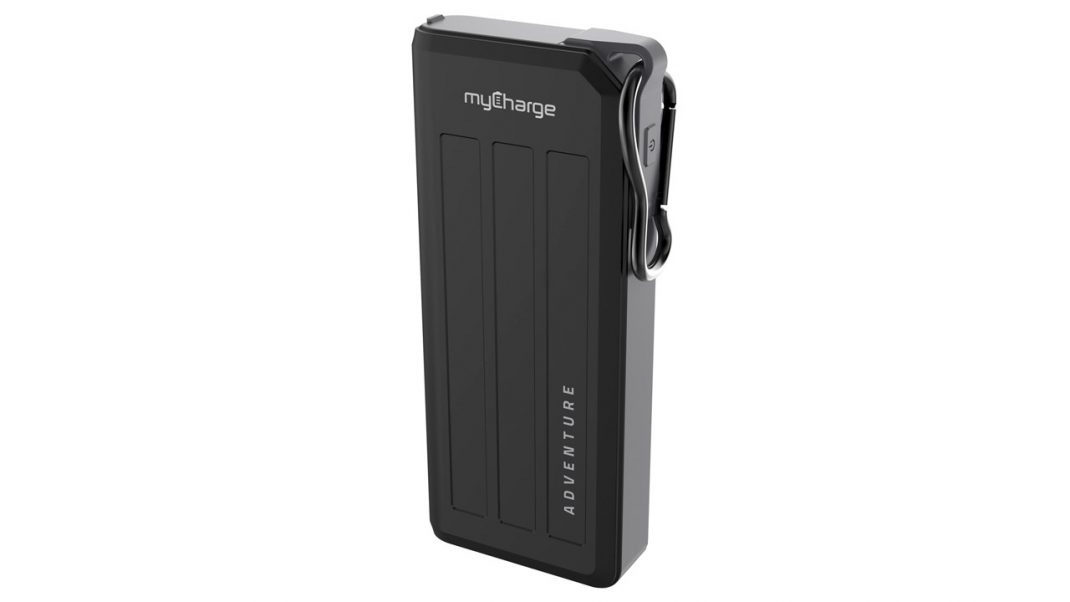 MyCharge is a brand that should look familiar to anyone who travels and hits the news stands and gadget shops. Once a quiet competitor in the mobile power field, MyCharge has come to be one of the most prominent names in the business. Recently at CES 2019 I got to visit with them a couple of times and even got to take a look at the MyCharge Adventure MEGA-C Power Delivery and Quick Charge 3.1 power bank. That is a very long name for a big, hefty USB battery pack that can potentially last you for an entire trip. The Adventure MEGA-C is same size and weight as the iPhone 6+ so if you got used to carrying one of them around then this won’t seem too bulky at all.  It’s about four times thicker than an iPhone 6+ but it would still fit in the average purse, bag or backpack – heck if you don’t have enough room it has a built-in carabiner.

For that size though you can get up to ten times more battery than you are used to (20100mAh of power to be precise) which would be greatly handy if you find yourself somewhere where you there are no outlets.  You can even use this one as a base battery from which you charge your other battery packs on the go.  That way you could keep it in your pack or on a counter since it comes pre-charged and holds a charge for a really long time. The MyCharge Adventure MEGA-C Power Delivery And Quick Charge 3.1 can charge devices up to 4x faster than other batteries or outlets. MyCharge has worked with Qualcomm to make their batteries even faster charging using their “Quick Charge” technology.  This can even be used while the battery is plugged in, if the battery is too low on juice on the outlet then it will use its charge through technology to charge your phone while it charges. The Quick Charge works for the battery too to help it get it’s juice level back up faster. 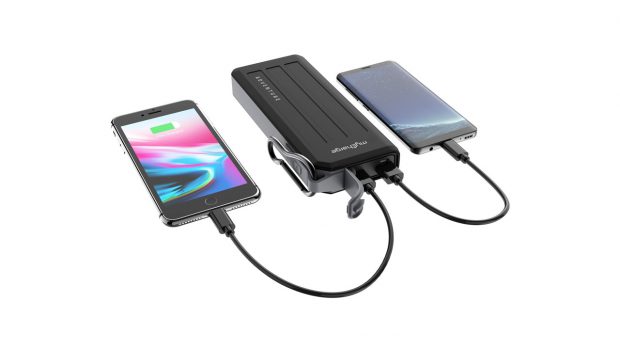 The Adventure MEGA-C has two outputs, one for USB-C and one for USB-A so you can charge iPhone or Android using either style of cable I have been at events in the past where my wife and I both ran our phones down at the same time and needed the battery pack.  As long as you got the two cables to work with you can plug both into the battery to charge, even if the battery is charging at the time. Thanks to the “Quick Charge” we don’t have to be cabled together for very long but if we need to we can do it up to five times more than the average battery.

If you aren’t sure if your device is compatible with the battery you don’t have to worry it has built-in “Smart Sense” that confirms compatibility so every charge is safe. Add to this the rugged casing on the Adventure series that gives splash resistance, drop resistance and dirt-proof then the battery is that much better for an emergency or active travels such as hiking, kayaking or camping. You can even connect a USB lamp or fan if that helps in case of power loss or just a desire to illuminate or cool and area.

My MyCharge Adventure MEGA-C Power Delivery And Quick Charge 3.1 battery pack is fairly large and a bit heavy but considering all it provides an active lifestyle or an emergency situation it should be the go to battery for most households, I know ours will put it to good use, especially when traveling.

BEST BUY HAS THEM FOR $89.99 AND MYCHARGE CAN BE FOUND IN MOST AIRPORTS. 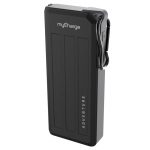