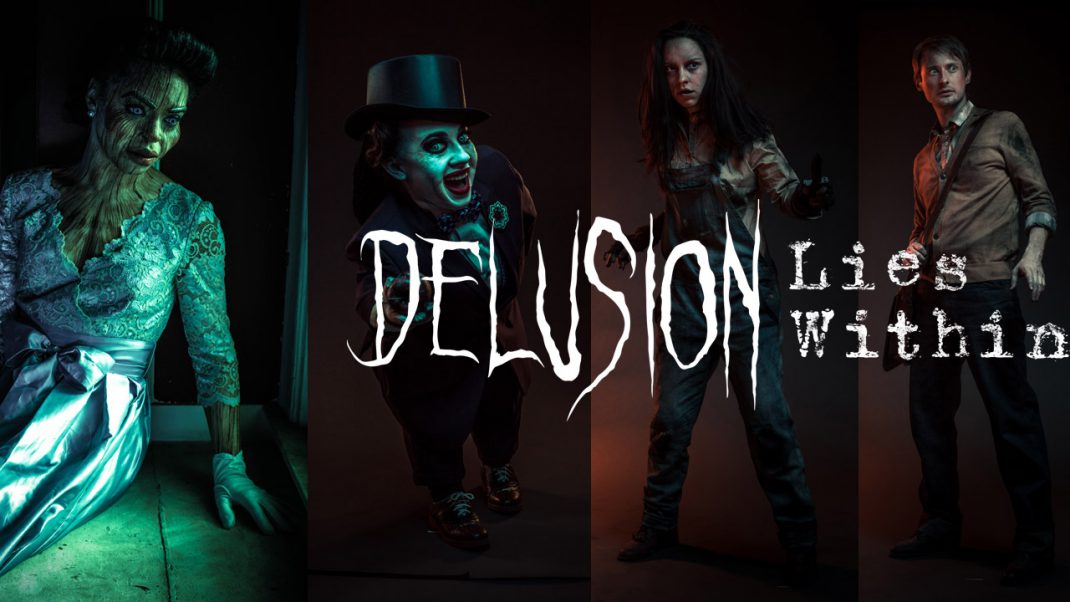 Recently, I got the chance to check out the first part of the upcoming Delusion: Lies Within cinematic VR series from Jon Braver. Braver is the creator of Delusion, an annual interactive theatrical horror event in Los Angeles during the Halloween season. The premise of this first season is that two people are on the trail to track down novelist Elena Fitzgerald, who’s dark fantasy novels had captured the hearts and minds of a legion of fans – that is, until she went missing and her final book in the series was never published. These two searchers end up biting off way more than they can chew when they discover a lot of twisted darkness and must attempt to escape with their very lives.

Delusion: Lies Within VR is a joint effort between Delusion and Skybound Entertainment. Skybound, in case you don’t know, is the publisher of Kirkman’s The Walking Dead comic series as well as the publisher of several mobile games (not to mention a multitude of other comic properties). With these two working together on the project, I was expecting good things, so I started up the preview build I was given access to and began the journey into Delusion: Lies Within VR.

The experience has a very minimal menu system as of now, and it didn’t take too long to start up the series preview. There are options to both download as well as stream the VR video, but I could only stream it in the version I had access to. With that, I began to question how good the video would look as, usually, VR/360 video looks pretty grainy and pixelated over streaming connections. Thankfully, Delusion: Lies Within VR broke with this tradition and provided me with very good video quality – extremely impressive. I am unsure as to what video codec they are using for this project but it is great at compressing video while keeping its quality. Delusion: Lies Within VR is well-acted, well-shot, and features terrific sets and set decoration, and brings plenty of creepy moments and some scares to boot. While it’s not expressly stated in the preview build I looked at, I would HIGHLY recommend that you enjoy Delusion: Lies Within VR from a seated, swivel chair if possible. The camera moves independently of viewer perspective and does make a few cuts when entering new locations, so it could make you feel wobbly if standing.

We got the chance to ask Jon Braver a few questions about this new endeavor, and you can read the Q&A here:

GS – Hi Jon, please explain the motivation and process behind the creation of the Delusion VR experience.

JB – At first, I was pretty skeptical about VR. I reviewed some content and felt pretty disillusioned by it. But then I started to think how cool it would be to merge theater and film in a way never accomplished before. Really thrust the audience into the movie and make them a sort of ghost within the manor, following the story in a truly unique way. As well, when I do the live shows, I feel guests end up missing a lot of what I’m trying to give them as there is so much going around them. With VR the viewer can have intimacy with the characters, the score, sound design, and special creature fx. They can revisit the series whenever they wish and capture every little detail. And there is a ton of detail thanks to my killer production designer Kevin Williams.

We set out to create the most cinematic VR series to date and during the process my skepticism turned to wonder. This really was live theater in the VR space. Crazy cool how it all played out! The process to translate the live show into VR, from a creative standpoint, was pretty fun. In terms of storytelling, I was able to achieve much more having more time to focus on story and not on the logistics of running a live theater production. I turned what was the audience in the play into two new characters, Daniel and Virginia, each with their own intriguing backstory. The characters overall were more flushed out as we had more time and money to spend on development. As far as camera, we were able to do some wicked things like floating over a table, flying through the forest, all really cool shots that give it that cinematic look we were going for.

In short, I’ve watched this piece so many times and it never gets old. I’m terribly proud of this time. We’ve really created something never before seen in VR.

GS – Were there any challenges or unexpected positives that you encountered during its production as opposed to producing your live theatre events?

JB – The technical aspects were a bit more challenging in that actors had to really know where all the stitch lines of the many cameras were during each scene. Can’t hang around on a line or you’ll cost us many 1000’s of dollars in post! Speaking of post, there really is no post-production protocol for VR yet. We had to learn our way through and connect with various partners excited to explore this new space. I’d say the only major drawback for me personally was not being able to get all the shots I wanted (inserts, etc.). We have to balance this new medium and how it affects the viewer (i.e. camera movement can unsettle the stomach) with making sure the story is told in the best way possible.

Honestly, the unexpected positive for me turned out to be the turn from skeptic to optimist!

GS – Where was Delusion VR shot?

JB – We shot the majority of the interiors in the same manor as the live play from 2014 as well as one scene (the alchemist chapter) in the house we used in 2011 & 2012. So cool to be back there. The exteriors I was hoping to shoot in Alabama or South Carolina as this is where the story took place but we did end up finding a creepy old manor in the woods of Topanga Canyon, CA. But don’t tell anyone we shot there 😉 All shot in the American South…. HA!

GS – What is the endgame with Delusion VR and are you looking to create completely new and standalone haunted VR experiences in the future?

JB – The endgame is unclear as this is an evolving process. We are still in the early stages of VR so we need to see how this medium is accepted (or not). If VR takes off as we hope then there will be more experiences for us to create in the overall Delusion Universe of stories such as Season Two of this Lies Within series and perhaps some shorter, spin off stories as well… perhaps with volumetric capture and more interactivity. Also, I want to make sure I’m clear when I say we’re not planning to take every play and conform it to VR. Some of these stories need to exist in a Feature Film, TV series, comic book, radio drama… but as far as VR, we evolve with the industry so ask me again in 6 months to a year and I may have a different answer 😉

We’d like to thank both Delusion and Skybound for allowing us a look at this new project and can’t wait to see what’s next for it.