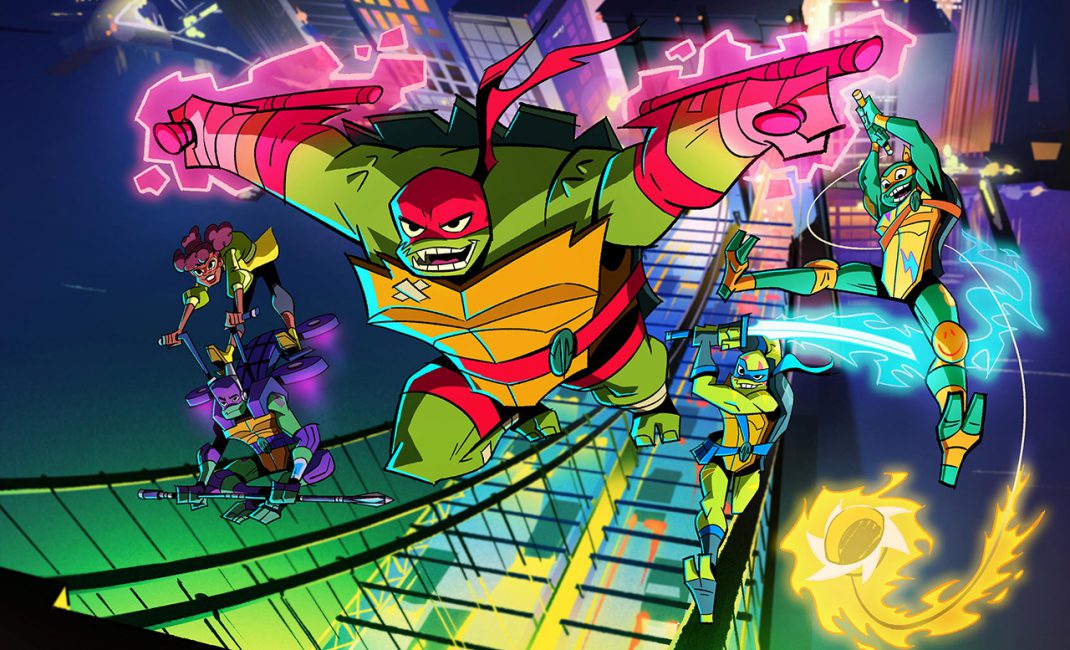 BURBANK, Calif.–June 26, 2018— Nickelodeon is bringing the Teenage Mutant Ninja Turtles, INVADER ZIM and more to life at Comic-Con International: San Diego 2018 through one-of-a-kind virtual and real-world experiences that will have fans saying, “Cowabunga”!  Headquartered at its 1,800 square-foot booth (#4113) on the convention floor, Nickelodeon will showcase: Rise of the Teenage Mutant Ninja Turtles, the all-new, reimagined series that follows the band of brothers as they seek to unlock the mystical secrets of New York City; the upcoming INVADER ZIM original TV movie; the return of Double Dare, a reboot of the iconic game show; the hit animated series The Loud House, which follows 11-year-old Lincoln Loud’s life with his 10 sisters; and Reptar from Rugrats, who will tower over Nick’s space.

Select fans have the opportunity to interact with the Teenage Mutant Ninja Turtles in “Rise of the Teenage Mutant Ninja Turtles Live,” a virtual reality experience that immerses users in the Turtles’ iconic New York City world and allows them to have a conversation with Mikey or Donnie—voiced live on the scene by Brandon Mychal Smith and Josh Brener, respectively. More details will be available soon for this off-site opportunity.

The “Rise of the Teenage Mutant Ninja Turtles Live” experience is created by Nickelodeon’s Entertainment Lab, the network’s division that spearheads research and development efforts around new technologies such as virtual reality, mixed-reality, augmented reality and artificial intelligence for Nick and its audience. Nickelodeon’s Entertainment Lab debuted Slime Zone, its first social virtual reality experience at IMAX VR centres globally in 2018, and recently announced a financial investment in Dreamscape Immersive, the location-based VR startup, whereby both entities have committed to produce an experience using Nick’s IP for kids and families.

Nickelodeon will present two panels: Rise of the Teenage Mutant Ninja Turtles, featuring the new voice cast and a sneak peek at the upcoming series; and INVADER ZIM: Enter the Florpus!, a reunion with the original voice cast celebrating the new TV movie.

The following is the full rundown of Nickelodeon’s activations:

Thursday, July 19, 1:45p.m. – 2:45p.m. (Room: 6A): Rise up! The Teenage Mutant Ninja Turtles are back with Nickelodeon’s brand-new mutation of New York’s half-shell heroes with a panel that celebrates the latest incarnation of Turtles and reinvention of the world famous franchise.  Joining the discussion is the new voice cast–Omar Miller as Raph, Ben Schwartz as Leo, Josh Brener as Donnie, Brandon Mychal Smith as Mikey, Kat Graham as April O’Neil, and Eric Bauza as Splinter–along with the co-executive producers Andy Suriano and Ant Ward, and legendary voice director Rob Paulsen. The panel will feature never-before-seen clips from the upcoming series and be moderated by Keely Flaherty (BuzzFeed).

Nickelodeon, now in its 39th year, is the number-one entertainment brand for kids. It has built a diverse, global business by putting kids first in everything it does. The company includes television programming and production in the United States and around the world, plus consumer products, digital, recreation, books and feature films. Nickelodeon’s U.S. television network is seen in more than 90 million households and has been the number-one-rated kids’ basic cable network for 22 consecutive years.