They Remain – A Review (Film)

And now for something completely different from me: A film review!  For my first foray into cinema review, we have “They Remain”, a suspense-horror movie by Philip Gelatt, starring William Jackson Harper and Rebecca Henderson.  “They Remain” is the second film directed by Philip Gelatt, and is based on the novella -30- by Laird Barron.  This film has been released on a limited basis, and I was given a link to the film on Vimeo for review.

“They Remain” follows two scientists, Keith (William Jackson Harper) and Jessica (Rebecca Henderson), who are tasked to investigate a wooded area that was the campsite of a cult that participated in human sacrifice and murder.  Keith and Jessica are dispatched to the forest by a corporation, intent on discovering how the animal ecosystem of the area either helped instigate the cult’s behavior, or how the ecosystem was affected by it.  The pair discover later, that the site they are camping on was also home to a criminal investigation team that was sent to the area to recover more human remains, however had to leave the site earlier than planned due to their team leader going crazy and attacking his teammates. 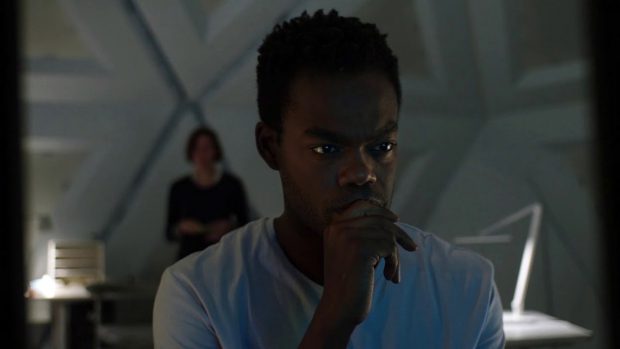 Jessica and Keith continue their investigation of the area, Keith heading out to plant cameras and recover samples while Jessica stays at base camp testing these samples for evidence.  As time goes on, Jessica begins to hear voices and knocks on the camp’s front door while Keith begins to have visions and dreams of the cult and their activities.  The two continue their investigation into the area’s ecosystems, while continuing to deal with these new developments.

“They Remain” is based off of a short story by Laird Barron, and it feels like it too.  The movie’s storyline comes off way too thin to hold up an hour and forty minute movie.  There are vast gaps in story telling where the characters are either sitting around in the forest, or just looking off into the distance.  This may be meant to build suspense and drama, but it made the movie way to slow and dull for me.  This was an incredibly frustrating movie for me to watch, because I was interested in what was going on but felt like all the good stuff either happened 10 years before the actual movie, or was happening at other places in the forest while I was stuck watching these two.  When the pair begin discussing the “Pleasant Valley Massacre”, I remember thinking that I would rather be watching that movie, then this one.

Sometimes when the story of a film fails to really entertain, then the acting can save the entire project.  Sometimes the acting is so good or bad, the film is saved in the process.  Unfortunately, the actors in “They Remain” had to deal with characters and dialogue that was so boring and dull, that no actor could have saved this film.  Both William Jackson Harper and Rebecca Henderson just come off as dull and uninterested in the story.  Both actors show very little emotion and read their lines as if it is a to-do list.  I have not seen either actor in any other projects before, but I have heard that William Jackson Harper is fantastic in “The Good Place”.  I need to watch that show, just to see what William Jackson Harper is capable of, because “They Remain” did nothing to show of his talents.

“They Remain” is a stunning looking film.  While I don’t know much about the technical terms of cinematography or camera placement in scenes, I was impressed with the visual aesthetics and shots within “They Remain”.  Scenes looked interesting, even if the dialogue and story was flat.  Camera angles made the scenes look good and the forest was an excellent backdrop for what little action the movie had to offer.  The best part of “They Remain” was how it looked.

So, I have watched many bad movies in my lifetime.  Some of these movies are even on my “Favorite Movie” list just because they were entertaining.  I can forgive a lot of stuff in a film, if it’s entertainment and worth my time to sit through.  “They Remain” wasn’t entertaining at all, not in the slightest.  The movie does begin slow and suspenseful, like most good suspense-horror movies do.  You begin to find out the plot of the story, and what the two characters are looking for.  The problem is that, this takes almost 45 minutes before anything even remotely spooky starts to happen on screen.  We are told about a lot of death and murder during the narrative, but nothing really happens to the characters for that long.  And when something does happen, it’s just Jessica telling Keith that she heard knocking on the front door last night and the camera didn’t pick up anything.

As the movie progresses, you keep waiting for something bigger to happen.  Are there still cult members walking around?  Is there something in the area that is causing the murders?  What is hunting the two scientists?  You get none of this, nothing!  The movie ultimately is the story of two scientists, investigating something cool, then go stir crazy because they can’t find anything cool.  That just did not work for me. 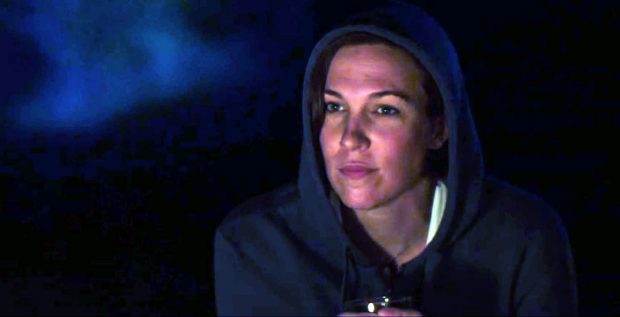 “They Remain” is a beautifully-filmed movie that consists of a slow, boring story and uninteresting characters, surrounded by something that might have been cool to watch but we never get to see.  “They Remain” is listed as a suspense-horror film and it fails in both regards.  I never felt any type of suspense, just boredom as the characters stare at trees, pretending to be freaked out about the behavior of wasps and ants.  There wasn’t a single moment of horror in “They Remain” for me, not one.  In the end, the material that the film was adapted from wasn’t enough to support a full length movie in it’s own right.  I would definitely skip this movie, if it’s showing near you.  “They Remain” was released March 2nd on a limited release run. 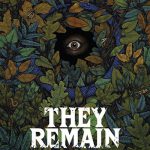