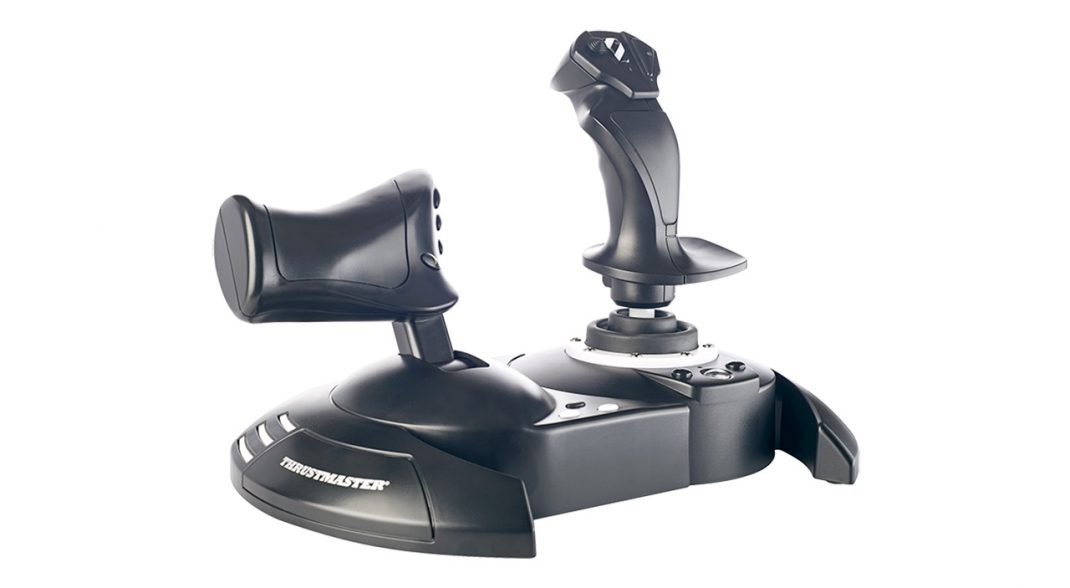 Console gaming has never been the realm of flight or space simulations. Usually, these products require a flight stick or throttle or some other sort of controller which most console gamers simply don’t own. Recently, Thrustmaster released a new HOTAS system for the Xbox One series of game consoles – the T.Flight HOTAS One. Setup in a standard stick and throttle design, the T.Flight HOTAS One is lightweight with a durable dark gray plastic shell. The throttle unit can detach from the flight stick side for a more custom control layout. Additionally, for more flight sim goodness, you can add the Thrustmaster T‑Flight Rudder Pedals for rudder control, but that is a separate purchase. To set the T.Flight HOTAS One up, you simply plug it in! Just make sure the unit is set to Xbox One mode on the toggle switch at its base. The unit is a wired controller so into the port it goes. Currently, there is one game on the Xbox One which supports the use of this flight stick and throttle combo – Elite Dangerous! So, that is what we played while reviewing this peripheral. The flight stick acts as one would expect, as does the throttle – except you will also find horizontal and vertical thruster controls on there as well! This means you can be moving in whatever direction you need to without taking your hand off of the throttle – a key feature of a HOTAS system. The throttle even has a small detente which indicates you have moved it into the 0% thrust position. One thing that would have been a nice addition to the T.Flight HOTAS One are suction cups that could have been attached to the base. Those would help the controllers stay put during intense gameplay if they are sat on a smooth surface or desktop.

Being that I am a newbie to Frontier Developments Elite Dangerous, I started it up and was thrown into a universe of dangers. The T.Flight HOTAS One functioned very well, with the usual Thrustmaster quality that I am used to in my dealings with their peripherals. The twisting action of the flight stick reminded me of my old Microsoft Force Feedback 2 joystick and was a great way to utilize rudder control. Also, the key bindings are all customizable in case you have your own preferences – however, I just went in with the stock setup and didn’t have too much trouble learning the basic layout in a few play sessions. Going forward, it looks like Bandai Namco’s upcoming Ace Combat 7 will also support the T.Flight HOTAS One, so you will have more than one title in the peripheral’s arsenal at some point in the near future. I did note that the USB cable which comes out of the T.Flight HOTAS One is rather short, so you might need to utilize a USB hub as an intermediary between your controller and the Xbox One console. Additionally, there is no headset port on the controller, meaning you will have to use a different solution for that purpose – whether it is an Xbox One controller nearby with a headset plugged in or a standalone headset solution.

Overall, the Thrustmaster T.Flight HOTAS One flight system for the Xbox One is a great controller that suffers not because of its build quality or functional parameters, but because of the lack of games supporting its use at the time of this writing. Hopefully, developers will see the benefits of the peripheral in their flight games going forward.