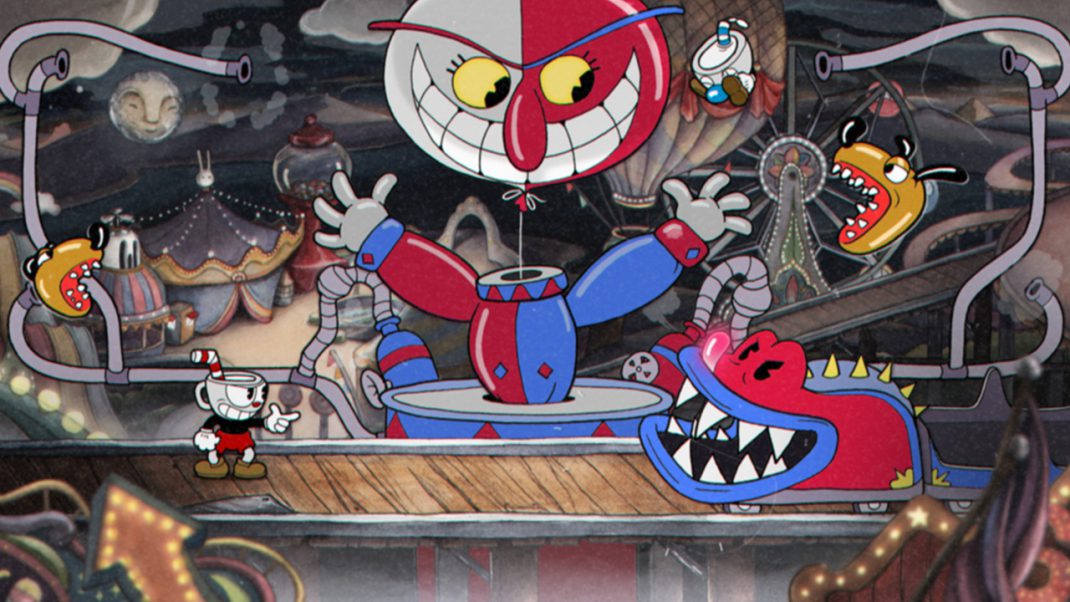 I was a Silly Symphonies kid. My entire childhood was spent going to my grandmother’s house on Saturday mornings for breakfast. I remember the smell of bacon and eggs wafting out of her kitchen, the crinkle of the the plastic covering her couch, and the wood grain of the television set used more as decorative furniture than entertainment. It was on this TV that my cousins and I would watch well-worn VHS copies of Walt Disney’s Silly Symphonies while the adults were in the other room.

Cuphead is kind of like revisiting those memories, only to have those memories take you out back into an alley, beat you up, and steal your lunch money. Not only is Cuphead a bully, however, it is also one of the most beautiful and rewarding games to grace the Xbox One. 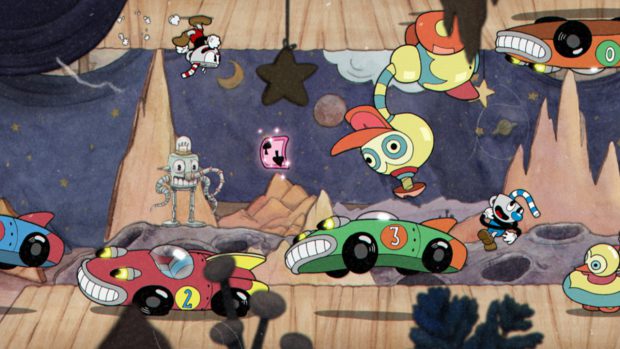 Much has been made of Cuphead’s production since its jaw dropping debut at E3 2014. The game has captivated audiences since long before it was in a playable form. Cuphead has been in development for the better part of seven years and the work definitely shows. The game boasts a retro 1930s style courtesy of an absolute labor of love by StudioMDHR who, in fact, devoted themselves to hand animating everything you see on your screen. After a seemingly never-ending albeit understandable wait, the game is finally in our hands and available to play.

Cuphead is a side scrolling boss-rush platformer. Think Contra but cuter and a hell of a lot more grueling. The game tells the story of brothers, Cuphead and Mugman, hopelessly addicted to gambling and wagering their souls. Losing to the Devil himself, the duo offers to work off their debt and are christened as Hell’s bounty hunters. This is the game’s license to send you after boss after boss, each one more creative than the last. From a living, breathing candy castle to a pair of boxing frogs who combine into a slot machine, the thing that kept me going more than anything else was a desire to see who I would fight next.

Cuphead has a clean gameplay loop at its core. There is a simple hub world that functions as little more than a map to move around and choose levels. Most levels are a boss fight, a single room affair where you do battle with a creature that usually will occupy the better part of the screen in fights that typically last around two minutes. Between boss fights there are short platforming levels (called “Run n’ Gun”) where you can hunt down tokens that can be traded in for new weapons and power-ups. Clear all the bosses on the map and you’re free to move to the next. 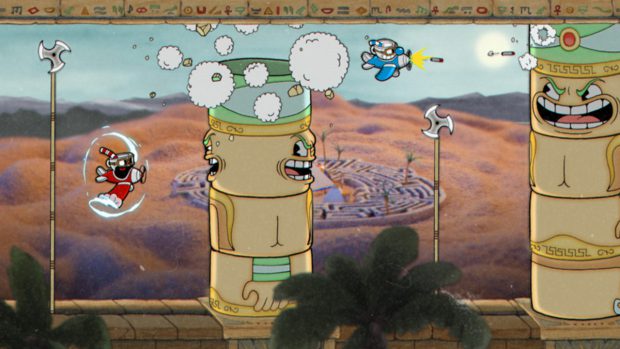 Fighting bosses is a simple yet challenging affair. Bosses attack and you shoot back in ever growing bullet hell scenarios. Mixed in with the bosses’ attacks are pink projectiles that you can parry away and fill a super meter. You’ll most likely die (a lot) as you learn to recognize attack patterns and tells, made crystal clear by the quality of the animation, and after time you’ll begin to recognize these fights as rhythm based puzzles. It’s a tough yet fair setup and I never blamed the game if I died because I could usually look back and see where I took a misstep or wasn’t paying attention to the way the boss was behaving. If there is any complaint to levy against the game, however, its that mid-fight there is no way to tell how close you are to beating any given boss. There are no health bars, only a timeline after you die showing how close you got.

With clean animation and a thrilling jazz soundtrack, Cuphead is an easy recommendation for anybody in love with the Silly Symphonies/Max Fleischer era of cartoons. Challenging and rewarding gameplay is the icing on the cake. Cuphead took a long time to release and the work clearly shows. There was more than once where I had to remind myself that I was playing a video game, not simply watching one of my grandmother’s old VHS tapes. I’ve loved and hated my time with Cuphead in all the best ways and I’m excited to go back and revisit its bosses, if only to admire the animation StudioMDHR obviously poured their hearts, souls, and love into.