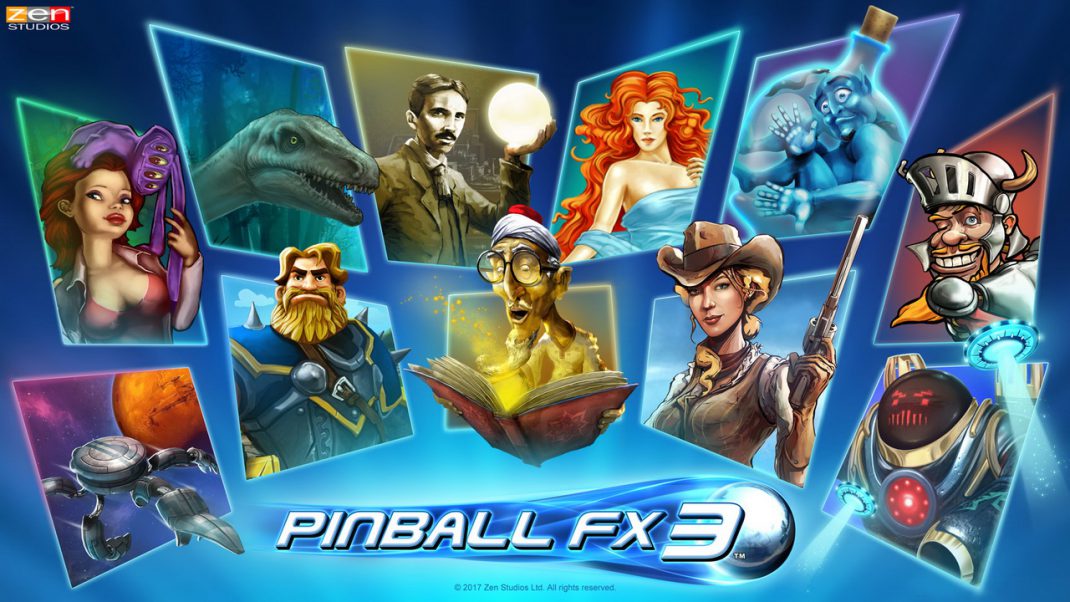 I  love pinball and have been playing on machines since my great uncle had a small arcade when I was around six.  It was an easy babysitter – load me up with quarters and I could play on them for a good while.  So I though I was pretty good.  I can’t come even close to affording my own machine so the next best thing is a console. I got Pinball FX upon its release and it was very clear that Zen Studios had done their homework and they completely out shown the competition.  The physics of the bumpers and flippers – it all felt like and looked like a real machine. Not to mention the fact that the tables are entertaining in subject and diverse in play speed and length.  Some were based on existing boards and others were entirely new creations.  When Pinball FX 2 came along, suddenly there were tons of animation and movement on the board that wouldn’t be possible in the real world.  Characters jumped around the board, things levitated up above where the glass should be and basically what was a little animation in the first game was completely bringing the table to life.  Now, Zen Studios has released Pinball FX 3! What new things will Pinball FX 3 bring to the table and how do the new Universal Classics Pinball tables play? Let’s find out! 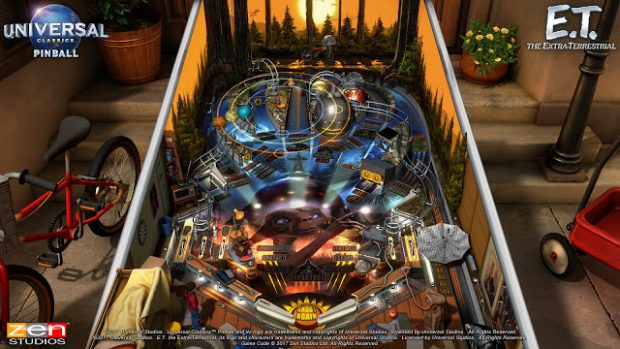 Pinball FX 3 has taken the beautiful physics and graphics of the series to the next level and tried to tie in concepts of community and personal challenges to keep gameplay fresh.  Now you can play games that work towards your rating on online leaderboards! Now you are not just playing against the table but your score is up against anyone else who has the game and is playing competitively.  There are hundreds of achievements and completing them helps unlock such things as slow motion table so if you think you are going to lose the ball you can slow-mo, nudge, and (hopefully) save your ball.  There are passive unlocks too that will make it so you have like a 5X multiplier to your score on the next game or something like that which can boost your score. There is still Hot Seat play which is where you have more than one player in the room and you hand off the controller to the next player. There is even a practice mode that gives you unlimited balls to keep practicing how to hit the ball off the flippers to hit the right bumper, during this mode you don’t get achievements or unlocks but you do get what everyone who wants to get better needs: practice, practice, practice. 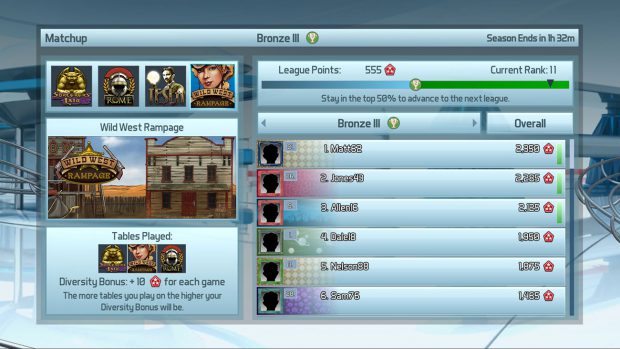 There is a feature that has gotten some mixed attention and that is forward conversion of tables from Pinball FX 2.  The creators said they would be forward compatible but a bunch of them were removed and, for some reason, didn’t make it.  I thought I had noticed a couple missing but thought it was “just me”. After checking the community boards, however, I discovered I wasn’t wrong.  That being said the most important ones to me were the Star Wars tables and they made it.  I’m not sure if the Aliens Vs. Pinball tables are new but I have an eye on them next after The Universal Classic Pinball tables. 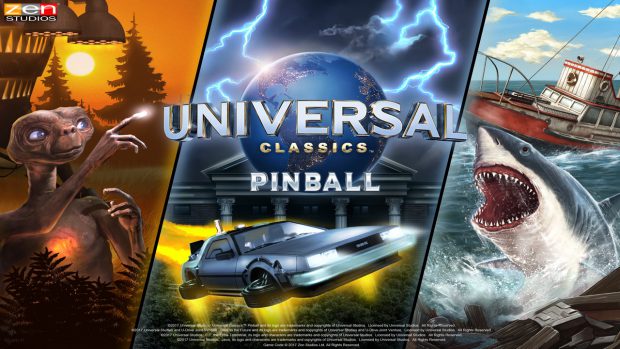 If you are a horror and Halloween fan like we are here at GamingShogun, then when you hear “Universal Classic” you immediately add “Monsters” to it.  I don’t think we are to blame, the studio was built and flourished on those classic films. As a matter of fact the last section of one of the balconies from the original The Phantom of The Opera (1944) was just torn out a few years ago. I got to see it moments before it was torn down while on the tram.  So when I say the Universal Classics boards and an alien, a really big fish, and a time traveling Delorean were on display, I was kind of shocked us as they weren’t so classic as say the Daughter Of Frankenstein, Dracula, etc.  Then I got to thinking: The pinball tables are a big “ride surface” for the pinball and how are the rides for E.T., Back to the Future, and Jaws were removed from the West Coast and the rumor mill says it might be in danger on the East Coast due to expansion. Both the Back to the Future ride and the Jaws rides are gone.  I guess that can qualify them as classics if you can’t ride them anymore (if you go to Universal Orlando ride E.T. while you can, it still holds up beautifully!). 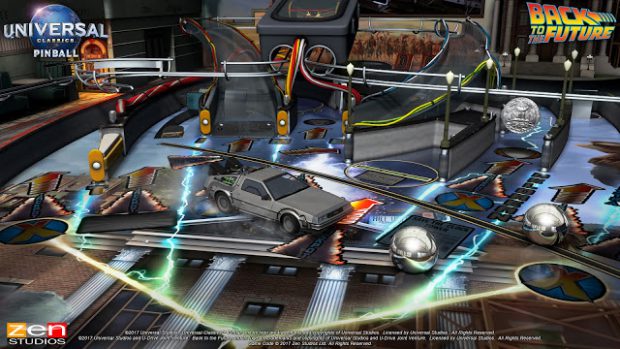 First table I did was the Back to the Future Trilogy. It is a short board with a moderate speed with tons of animation going on constantly.  You have native american warriors going up on a belt like ducks at an old style shooting gallery that you tried to knock down with the ball, the train moves off to the side, and the Delorean lands on the table. When Doctor Brown flips some switches and you get someone really good on it there were animated things happening all over the place – both on the table surface and even into the air above it where the glass should be.  Of course, it has a flux capacitor which no Back to the Future game should be the same without, and when things are right you can spin the “OUTOFTIME” personalized plate. You just want to keep playing to see what happens next! 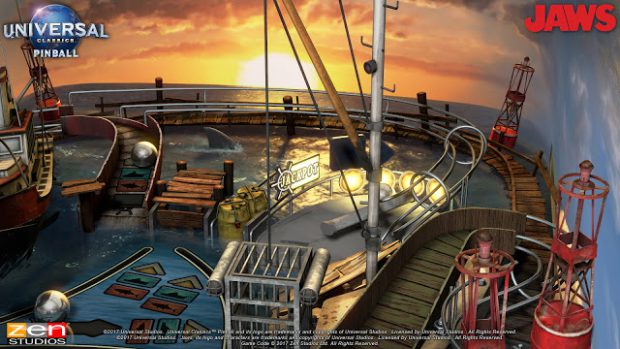 Next was Jaws which I had the highest hopes for because for deeply personal reasons Jaws is very near my heart.  The middle field of the table was wide open but displayed bonuses being worked on and such.  The plunger is the fishing pole, the left top has Quint on the spear ramp of The Orca, the boardwalk, and beach complete with umbrella are on the top right and in the top middle is the shark cage, which is encircled by an ominous fin.  This is one machine that if you aren’t too hot at it you might not have a great time.  It is a fairly short table with fast play meaning you have to have your reaction times on point.  I would not be surprised if tables like this are the reason the practice section was created. Once you get the ball rolling so to speak this board proves its worth in excitement, I mostly watched my wife play because she got her groove down faster on it. Then it was like watching a short film about a great white shark, an obsessed man, and the silver ball that brought them on a collision course! 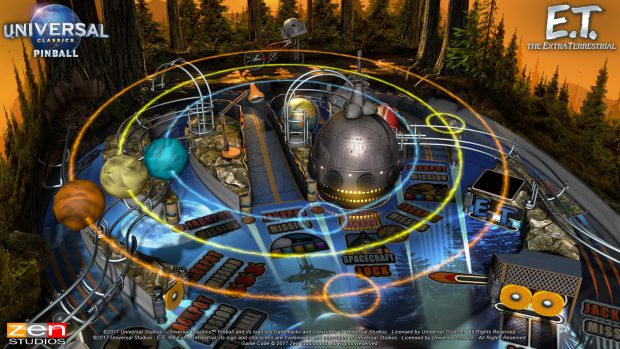 The last one I played was E.T. and that was probably for the best.  E.T. is a longer table with a decent speed but gets a little nicely slowed by all the beautiful animations and mini-games happening everywhere! You use the Jaws Pez dispenser to bite at the ball to launch it then it goes into so many details from the movie.  There are the dead plants that if you look closely have droplets of water coming down the side of them.  Elliot leaves a trail of Reese’s Pieces (best marketing placement ever!) for E.T. to follow down to the bottom of the board.  They talk while the ball triggers all kinds of events all over the table.  I was so proud the first time I got E.T.’s ship to take off then dropped a ball underneath.  The multi-ball seemed more forgiving as you were able to lose them both longer before the ball didn’t save.  Of all the tables this is the most family friendly, not just in the play but because of the character and the animation, it is probably one of the most fun and cool looking table I have ever played.

Pinball FX 3 and Universal Classic Pinball are the next evolution in the video pinball gaming world.  You can play tables alone or in leagues and online leadership boards, you can unlock passive and active attributes to improve your game by leveling up through scores and achievements. To me the best part will be doing it by making a time machine fly, helping a little fella phone home, all while dealing with the white beast in the dark waters off Amity Island. Just remember when competition gets stressful, Amity means friendship.