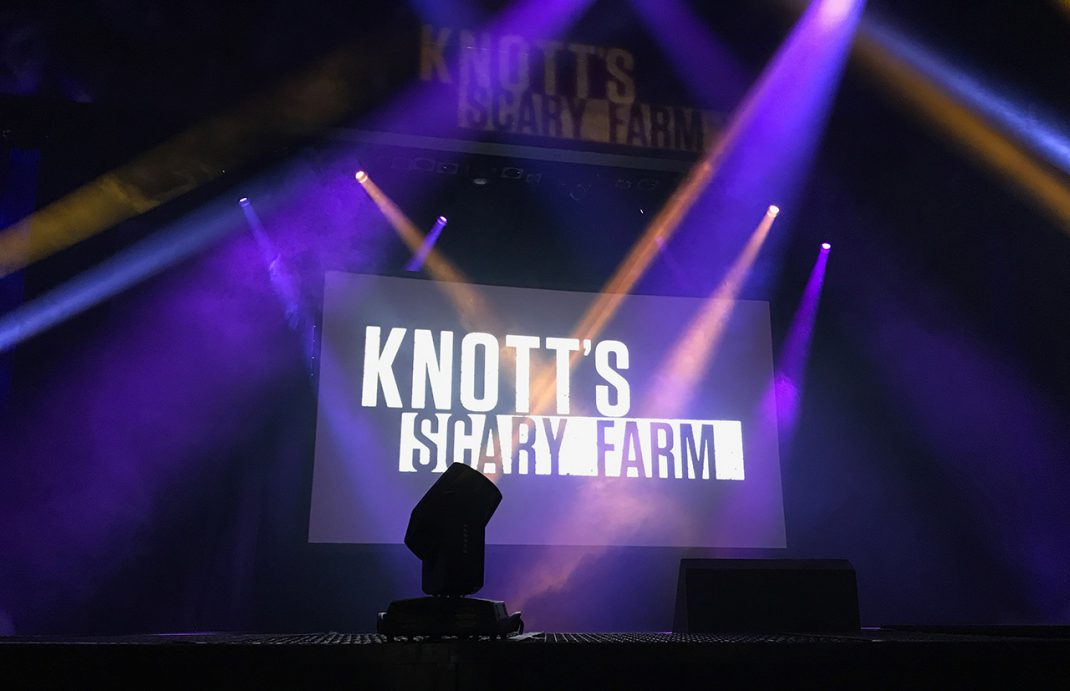 Buena Park, Calif. (August  2017) – The most haunting Halloween event in Southern California, Knott’s Scary Farm, returns with unimaginable scares and innovative thrills for its 45th season. The fully transformed park will feature 13 uniquely haunted mazes and attractions, including the return of Elvira, Mistress of the Dark, for her last performance as she bids farewell to the Scary Farm crowds with an all-new show. Knott’s Scary Farm is back for 25 horrifying nights from September 21 – October 31. This year’s Knott’s Scary Farm experience has all the ingredients of a truly terrifying nightmare, but unlike most dreams, Knott’s Scary Farm is a nightmare you can’t wake up from.

Dark Ride (New for 2017) – Guests will journey through an abandoned carnival ride where cruel characters still linger in the shadows in Dark Ride, Knott’s Scary Farm’s newest maze. The carnival attraction has become a refuge for sideshow freaks and now those shunned performers have created an ominous world where they plan to unleash terror on those who enter. Dark Ride will lead brave visitors through a treacherous path and into the bowels of a long neglected attraction as sinister shadows and horrifying scenes cast darkness over the once pleasant ride.

Pumpkin Eater (New for 2017) – Daring guests will attempt to survive the wrath of the murderous 7-foot tall creature that haunts the old woods surrounding The Hollow in this year’s new maze, Pumpkin Eater. The notorious creature is on the prowl, hidden within the dark confines of the haunted town he once terrorized. To escape the sinister Pumpkin Eater’s wrath all who enter must go on a quest through the silent town of victims, face a cave of crawling insects and solve the labyrinth of thorns that blocks the only way out.

Trick-or-Treat: Lights Out (New for 2017) – Scared of the dark? Returning more sinister and twisted than ever before, guests are invited to step inside the Green Witch’s haunted home and venture through its dark pathways in Trick or Treat: Lights Out.  Armed with only a faulty flashlight, brave visitors must face the terror of the Green Witch’s house completely in the dark. Featuring new state-of-the-art effects, unexpected scares and other eerie surprises, Trick-or-Treat is back to terrorize like never before.

Returning for the last and final year at Knott’s Scary Farm, Elvira is back with a bang, in a brand new spectacular farewell show, Elvira, Mistress of the Dark. The exclusive performance will pay homage to the Queen of Halloween’s celebrated comedy-horror film, complete with musical numbers, dance and humor. Knott’s Scary Farm will be the exclusive home of Elvira for her final performance this Halloween season.

Special Ops: Infected – The city is in need of brave soldiers looking to stop the zombie apocalypse in an all-out war against the undead in this interactive experience, Special Ops: Infected. Armed with specially designed laser guns, brave groups of guests will embark on a mission to find the cure to the infection by navigating through sprawling city streets and buildings. The popular attraction includes blood thirsty zombies, more interactive targets than ever before, along with multiple action-packed surprises hidden around every corner.

Shadow Lands – A fulfilling life ensures a soul safe passage into eternity, but what happens to the souls of soldiers slain in battle? The Shadow Lands maze invites valiant wanderers to fight off demon samurais whose souls are cursed to rot within the depths of purgatory. Guests will embark on a quest through a sacred shrine, an ancient Japanese temple and into the midst of the shadow lands.

PARANORMAL, INC. – A fan favorite, Paranormal Inc., returns to Hayden Hill for another bone-chilling year.  Featuring high flying aerial stunts and scares, guests investigate a haunted hospital. Where demonic spirits have been detected throughout the mysterious halls and new unexpected bloodcurdling surprises are hidden around every corner.

Red Barn – The horrifying, blood-soaked Red Barn re-opens its doors, filled with carnivorous animals seeking to prey on human flesh in the park’s goriest maze.  Legend has it, the farmer who owns the barn was transformed into a heinous creature who sends his sadistic sons to procure food and new victims.  None dare enter the barn, for those who enter, never escape.

The Tooth Fairy – This twisted tooth fairy steals more than just baby teeth as he drags his victims out of their bedroom window and into a world of cruel dentistry. Unbelievable special effects include a blackout room through which guests must feel their way out, a disorienting x-ray strobe light room, and a final encounter with the terrifying tooth fairy himself. Say aahhh.

Voodoo – Order of the Serpent: The haunting legend of Papa Legba continues as guests follow him on his foreboding journey to conjure the serpent demon goddess in the outskirts of New Orleans. Trudge cautiously through the cursed swamps of the Deep South, where creatures search the murky bogs for their next bloody sacrifice and demons curse the innocent with Voodoo hexes.

The Hanging®: – A live stage show on the Calico Mine stage irreverently looks back at the year’s pop culture with killer comedy.  Notorious for its special effects, pyrotechnics and high-flying stunts, The Hanging is a no-holds-barred assault on pop culture’s most infamous moments of the past year.  A must see parody!

Knott’s Scary Farm is far more than a collection of haunted attractions.  Every night monsters spill out onto the streets and turn theme park midways into murderous scare zones.  From the world famous Ghost Town Streets to the Boardwalk area filled with evil clowns, there’s nowhere to hide at Knott’s Scary Farm.

Ghost Town Streets is the original and largest, most terrifying scare zone that started it all.   Bands of half-human, half-animal monsters prowl the streets and inhabit the fog, while the notoriously startling sliders lunge from every fog-filled corner of the land.  Fiesta De Los Muertos features colorful costumes and larger than life stilt walkers in a dark scare zone.  In the Boardwalk, clowns crave your undying attention in the CarnEVIL scare zone. Returning for a second year, The Hollow scare zone will terrorize guests as they find themselves in a war between three covens of witches and their armies of the undead. The fog-filled streets along with the army of the undead treacherously blend into the shadowy night as they frighten all whom they encounter. Featuring an all new fiery finale, The Hollow is a practically all new with a themed maze to accompany it.

–       The Knott’s Scary Farm Pass returns for the 2017 season and offers unlimited visits to all 25 event nights. Current 2017 Knott’s Berry Farm Season Passholders can purchase the pass at the limited time price of $80 and non-passholders can purchase the Scary Farm Pass for just $90. Prices valid through Sept. 17 or while supplies last. Plus applicable taxes and fees.

–       Single night tickets – Buy tickets at KnottsScaryFarm.com and save up to $35 off the regular main gate price of $75. Knott’s Season Passholders receive a discount on single night tickets. Applicable taxes and fees apply to online orders.

–       Fright & Fast Lane – For the first time ever, ride and scream all night long with unlimited priority access to all mazes plus priority boarding on all Fast Lane rides.  Fright & Fast Lane starts at $80 and varies by night. Separate Scary Farm park admission required, and not included.

–       Scary Farm Boo-Fet + Early Entry – Offered at Mrs. Knott’s Chicken Dinner Restaurant and Spurs Chophouse, munch with monsters before Knott’s Scary Farm opens each night.  Meals include a 2017 souvenir bottle, which includes unlimited complimentary refills on the event night and $1.00 refills for the rest of the 2017 season. After dinner, enjoy early entry into select parts of Knott’s Scary Farm a few minutes before it opens to other mortals.  Boo-fet dinner is $28.99 + applicable taxes and fees when purchased online and $33.99 + tax when purchased at the door. Separate theme park admission required, and not included.