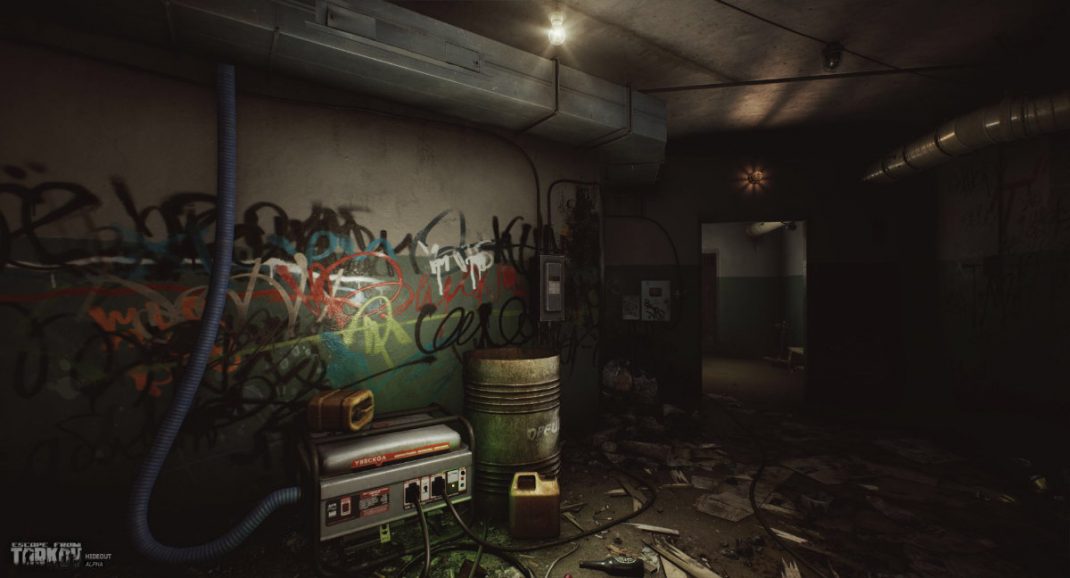 Escape from Tarkov Getting The Hideout for Open Beta Testing

Developer Battlestate Games announced today that a new feature for Escape from Tarkov called ‘The Hideout’ will be available during open beta testing in Fall 2017. The process of escaping from Tarkov is not as quick as it may appear from the outside- players will need a place to settle down to gain strength, store supplies, and stash discovered gear and weapons. Players must readjust utilizing ‘The Hideout’ features and resources before setting out to achieve the main goal of the game.

Players begin the construction of their ‘Hideout’ from the ground up. Initially discovered as an abandoned, cluttered bomb shelter without any means of sustaining life, players must continually build and improve aspects of ‘The Hideout’ modules, including: the power generator, water collection system, ventilation, medical treatment facility, recon center, heating, bathroom and other areas. Players will work to improve various parameters of their characters, such as: out-of-raid health, hydration and energy regeneration speed. Players will also gets special opportunities for the production of medicines, ammunition, and other items from various resources. Recon center improvements provide new opportunities of working with merchants and playing as Scavs, and much more.

There are 13 different ‘Hideout’ modules in production, and each will have unique bonuses, and require a unique scheme for building. Players will need different resources, access to a variety of merchants and necessary skill levels to unlock the module installation capabilities and the possibilities for their improvement.

The first thing players need to install in their ‘Hideout’ is the generator. Without proper fuel, production and regeneration of items will be slowed or disrupted. It should also be noted that the size of the cache will directly depend on the level of ‘Hideout’ cache. Players with an Escape from Tarkov Limited Edition copy will receive the cache of maximum, which is third level.

In addition to the basic modules of ‘The Hideout’, players can install elite modules that drastically improve living standards and security, accelerate skills leveling, allow production of unique items and resources, and add comfort to your new home. There also is a full-fledged shooting range where players can test their weapons.

‘The Hideout’ will be an integral part of the game and the out-of-raid processes that characters experience, such as restoring health, size of caches, access to new services of merchants, objects research and events in the world of Escape from Tarkov.

‘The Hideout’ feature is being developed in parallel and independently from the main course of the company and will launch during open beta testing in Fall 2017.

Escape from Tarkov is a hardcore story-driven MMO featuring elements of FPS and RPG. The events take place in the Russian city of Tarkov, which has been sealed off by roadblocks and sunk into the chaos of local warfare between private military companies. Escape from Tarkov’s Hazardous Environment Combat Simulator employs a number of custom system modules to create incredibly immersive gameplay that allows players to feel the reality of what is happening in the game.

The closed beta-testing of Escape from Tarkov is planned for Summer 2017. More about Escape from Tarkov can be found at the official website: www.escapefromtarkov.com. ‘Like’ the game on Facebook and follow the game development on Twitter @bstategames for all the latest developer updates and news.

Players can get a chance for access to Escape from Tarkov testing stages by placing a pre-order on the official website: www.escapefromtarkov.com/preorder-page.