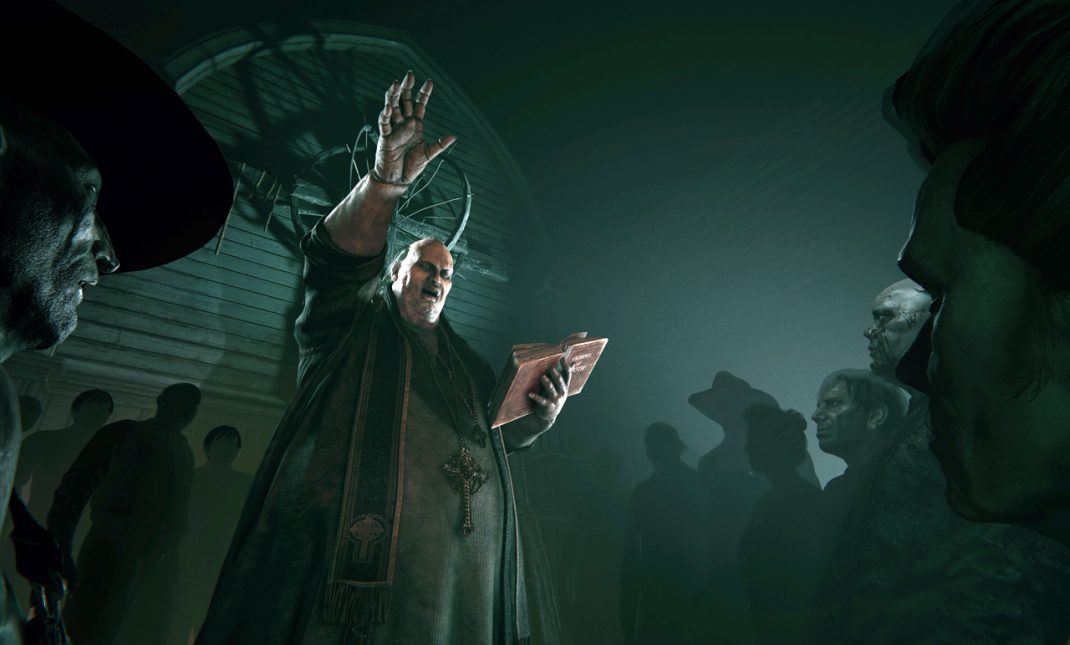 In 2013, Red Barrels released their first survival horror video game, centered around a journalist investigating an insane asylum, called Outlast.  What made Outlast immediately successful was the intense story and game play, where you play a protagonist that cannot fight back so your only options was to run or die.  Pretty soon, the internet was covered in videos showing people playing Outlast, just to capture their reactions and jump scares on camera.  Outlast became known as a good game for a jump scare, but what many people forget is that the game itself had a great story line, an intriguing mystery, and tense moments that really made the player uncomfortable.  Four years later, we finally have a true sequel in the aptly named Outlast 2. Does the sequel live up to the quality of the first game, or does it get crushed in the expectations?  Be warned, I tried to stay as spoiler free as possible, but some of my critiques talk about the story, so proceed at your own risk.

In Outlast 2, you play as Blake Langermann, an investigative journalist and cameraman, who is traveling to Arizona with his wife, Lynn, to investigate the discovery of the body of an unknown girl.  Near the end of the trip, the helicopter carrying Blake, Lynn, and the pilot, crashes.  Blake wakes to find his wife missing and the pilot skinned alive and attached to a tree.  Searching for his missing wife, Blake makes his way towards the town of Temple Gate, which is run by a man named “Papa” Sullivan Knoth and his cult of followers.  Blake learns that Lynn was abducted by this cult, and is pregnant with Knoth claiming the child is the Anti-Christ.  Blake also learns about another group of heretics that is opposed to Knoth’s group and is in open conflict.  Caught between the two rival groups, Blake needs to find Lynn and get her out of the area, while discovering the mysteries of Temple Gate. 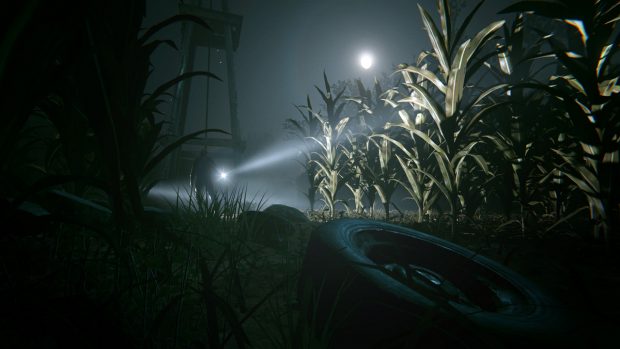 Outlast 2 has a sub plot that comes out as hallucinations suffered by Blake.  Blake remembers a traumatic event that occurred while he was attending a religious school, and is centered around the death of a girl he knew, named Jessica.  These hallucinations pop up at certain times during the game, and I kept waiting for a huge pay off at the end where Blake connects this past trauma with the trauma that he is currently experiencing.   Unfortunately, that pay off never comes, and the whole sub plot of Jessica feels like it was only used to pad the length of the game.  The story would have been so much better and stronger if this sub plot was left completely out.

Other then the subplot critique, Outlast 2 has a decent story line, but no where near as strong as the first Outlast.  Miles from the first game had a strong reason to keep filming, he was documenting the horrors in the asylum to expose the events and experiments going on within the walls.  Honestly, what motivation does Blake have to continue to record his events during Outlast 2?  He isn’t hoping to expose Knoth for his crimes, or expose some conspiracy within the town of Temple Gate, he just wants to find his wife and leave.  The use of the camera in Outlast 2 is literally only there to give the player the ability to see in the dark and to listen to voices using the camera’s mic.  So, if you can suspend your disbelief knowing that, then the rest of the story of Outlast 2 works ok, but it isn’t anywhere near as compelling or as strong as the first game. 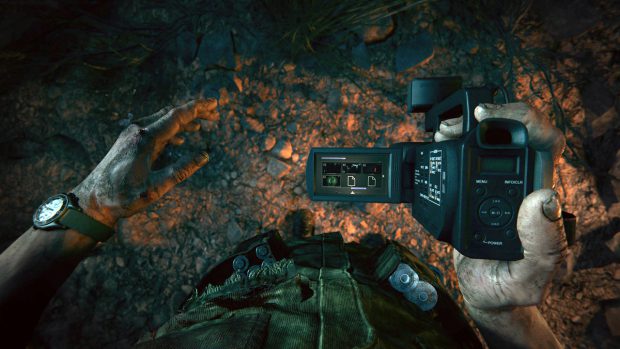 The game play for Outlast 2 is exactly the same as Outlast, with a few new editions.  Like the first game, Blake is completely inept at defending himself from anyone.  Blake can only run and hide under beds, in barrels, in wardrobes, or in pools of water.  Blake must be in worse shape then Miles was, due to the fact that Blake has less stamina and can run for shorter distances then Miles could, so your foes will catch you much quicker in a foot race.

You will need to find batteries, just like the first game, but this time you have access to an inventory screen that allows you to see what’s in your pockets.  You can collect batteries and bandages while exploring the lovely town of Temple Gate, with the batteries recharging your camera and the bandages healing you when you get caught by the inhabitants.  Your camera also has a live mic that now allows you to listen to noises in a particular direction.  When pointed at a noise, you will hear exactly what is being said and where that noise is coming from.  This will help you avoid chance encounters when you cannot see very far in front of you, like while hiding in a corn field.  And yes, corn in Arizona is a thing, I did check on that.

The new additions to Outlast 2 were interesting, but not enough to really separate the game play from the original game for me.  This felt more like I was playing new dlc for Outlast then an actual sequel that took years to develop.  The easiest thing to say here is, if you liked the game play of Outlast then you will like the game play in Outlast 2.  If you are looking for something more, or huge advances in game play, you will be disappointed. 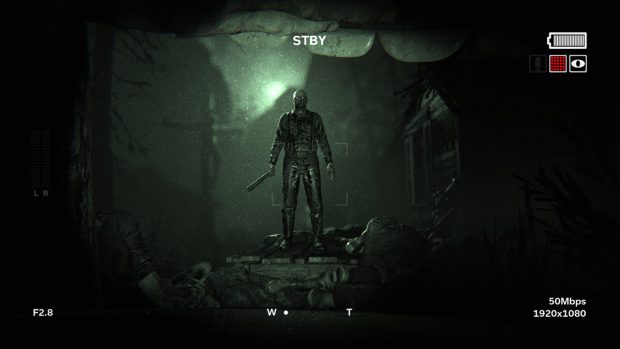 My main critique in the aesthetics for the Outlast series is simple, you see almost the entire world through the viewfinder of a camera that is equipped with night vision.  Everything is night vision green, or too dark to see what is going on or what the environment looks like.  So, going into Outlast 2, I already had that strike set up for my review and Outlast 2 carried on with that tradition.  Also, the setting in the first Outlast is far creepier, scarier, more intense then the setting in the sequel.  We go from haunting images within an insane asylum, that is overrun by inmates, to a town in rural Arizona run by religious fanatics.  Given the two, I vote for “asylum” being a hell of a lot scarier then “rural town”.  The visuals are exactly the same quality as the first game, with no real improvement.  It works, and it works fine.  Marta is horrific, and is designed perfectly, still have nightmares about her.

So, it looks like I hated the game, as I reread through what I’ve written up to this point, and that is far from the actual truth.  I would say that I was disappointed by the sequel, but did not hate it.  For me, sequels should take what was good about the first one, and really build on top of it to become great.  Most sequels fall at this, some fail horribly.  Outlast 2 simply does not improve on the original’s design, and that is ultimately my biggest critique with the game.  Outlast is far creepier and scarier for me, but mostly due to its originality and setting. You know exactly what you will be getting when you load up Outlast 2, and that isn’t necessarily a bad thing.  If you liked the first game, you’ll like the second game.  It is more of the same, and it’s good.  Where Outlast 2 failed to impress me, is that it isn’t different enough from Outlast to become great.  Is that worth condemning an game?  Absolutely not, but it also isn’t worth overly praising a game either.  Outlast 2 is solid, though confusing at times.  Outlast 2 is available now through Steam.