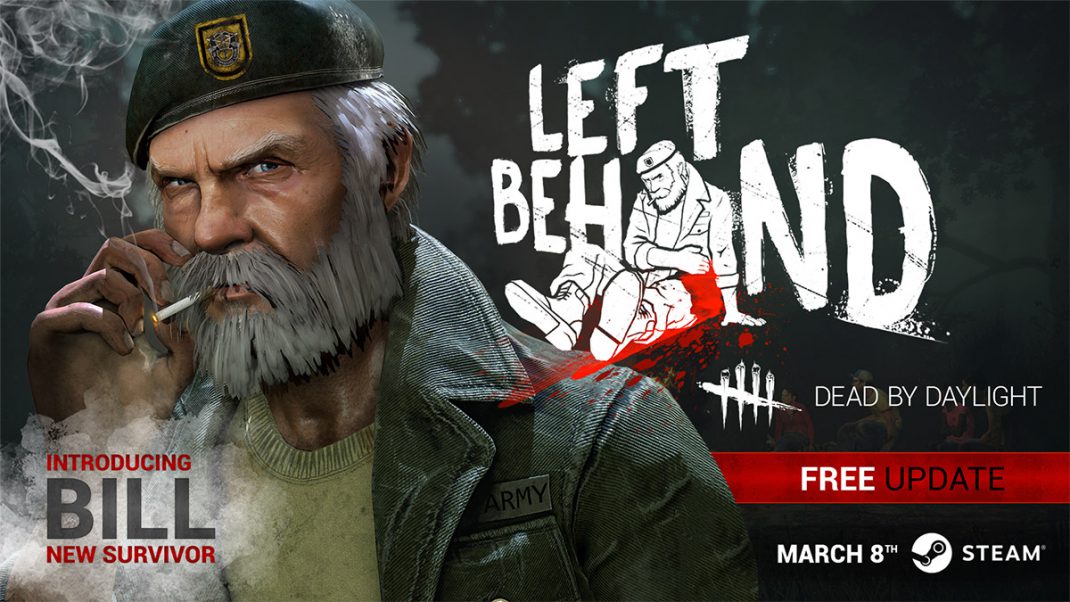 Bill From Left 4 Dead Lives on in Dead By Daylight

STOCKHOLM, SWEDEN (March 8th, 2017) Put on that old beret and the worn combat jacket. Starbreeze Studios, Behaviour Digital and Valve Software are thrilled to bring one of the most beloved survivors of Left 4 Dead back from the grave to fight another day in the asymmetrical multiplayer horror game Dead by Daylight. The additional content will be available for free on PC through Steam and other digital distribution channels starting today.

The Left Behind update for Dead by Daylight adds the legendary William “Bill” Overbeck as a playable survivor and four new survivor outfits themed from the original characters of the iconic Left 4 Dead  series.

Back to fight another day – It took two tours in Vietnam, a handful of medals, a knee full of shrapnel, and an honorable discharge to get William “Bill” Overbeck to stop fighting. He hated it. After decades spent drifting aimlessly through dead end jobs, Bill went in for a routine surgery and woke up to a plague turning normal people into mindless killing machines. Making his way through rural ghost towns and pitch-black forests, he found other survivors, and together they fled from the infected hordes. In the end, one of them had to sacrifice himself to ensure their safety. Bill was left for dead…and soon with a new enemy to fight.

More background information and details regarding Dead by Daylight: Left Behind, can be found here: http://www.deadbydaylight.com

Released on PC in June 2016, Dead by Daylight has already sold more than 1.8 million copies and has become an instant favorite with streamers on Twitch and other streaming platforms. The game will release on PlayStation®4 and Xbox One this summer.