For Honor has easily been one of the most highly anticipated games of the year – partly due to its smoothly rendered gameplay and beautifully decorating battlegrounds/environments.  Even more important, however, is that For Honor helps us settle one of the most pressing questions among armchair historians and gamers alike: Who would win in a fight between samurai, vikings, and medieval knights?

It should be noted early on in this review, that For Honor requires a pretty hefty footprint of hard drive space: 40 GBs!  Also, it isn’t a slouch in the performance requirements either, so be sure that your rig can handle it before you get the game.  Obviously, our console-playing brethren are all-set on this point because all they need is a decent internet connection – but, I digress.  The PC version, however, will allow you to boost up those beautiful graphics so much that you might just stop and watch all the flame and smoke, possibly at the expense of your own execution. 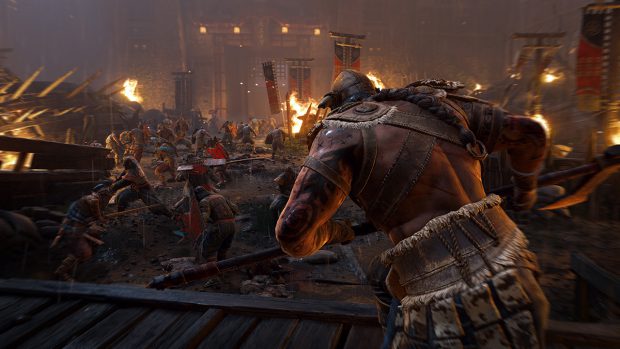 When it comes to battle there are two primary methods of melee combat, the first being a more tactical style of fighting.  In For Honor, this style of combat is toggled into with the left CTRL button and not unlocked from until the key is struck again or until one of you is dead.  In boss fights this proves to be particularly handy because boss strike and counter times can be very small so seeing it on the screen can really help.  It also helps you to time an execution mode on an enemy which adds points but more importantly looks bad ass.  This mode also helps you aim in battle which can be helpful so that you don’t miss an enemy and smack your weapon into a wall leaving your whole flank open.

The other style of fighting is more of a brawler or gorilla style where you are not locked onto the enemy and instead you just move in, try to make some strikes and move back out when you have taken too many blows or the style isn’t working and you need to go into tactical mode.  This kind of fighting is pretty handy when it comes to quick strikes and if one of your loaded skills is health regeneration this might give you a chance to get some distance and some healing in before another round.  This is also nice for keeping an eye on the enemy in case it suddenly becomes a two or three on one match, you might want to bug out.  It might be good to mention that among the different game difficulty settings, there is a “realistic” mode which means one death and that character is permanently gone. 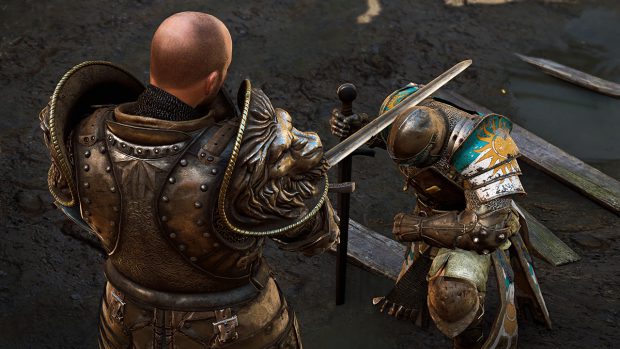 There are the primary types of fighting styles but there are also individual upgrades that you can get depending on the group you fight for and the style of the fighter in question.  A lot of players out there just care about multiplayer gaming and that is totally fine – though if they do just that and not play the single player campaign, they will miss out on an interesting story of how three of the greatest fighting groups the world has ever known came to blows.

Multiplayer in interesting because it involves three fairly common types of gameplay modes, but the battles all serve a greater purpose.  First off you have a player versus player dueling mode which is pretty straightforward, or you can do player vs. AI duel which is nice since all the players can be allied.  On these environment is important to keep a quick eye, because a big burning cauldron for light can also “light up” a player and pushing someone towards a broken ledge railing might leave them a splat on the ground. While it is considered more honorable to let a player face just one other person instead of multiple players teaming up against another, honor can be hard to find and loose alliances will be formed, Hunger Games style.  There is a nice response to these alliances though: the revenge mode.  If two or more players are hitting you, it fills up a meter which, when full, can activate the revenge mode. This mode let’s you attack back viciously and may give you the chance to even the odds again! 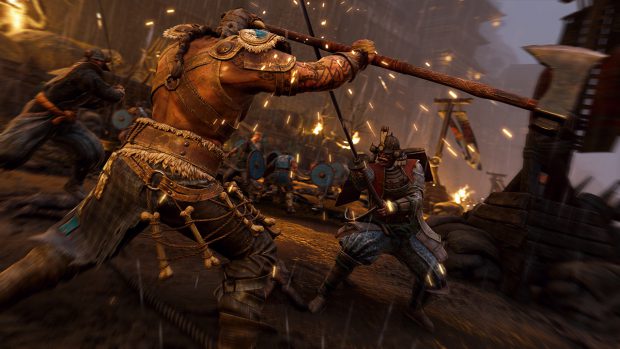 Then there is Dominion multiplayer mode which is basically a control point game.  The captured control zones give you points much faster than slaughtering your enemy and when you capture a control point your army of pawns will move up onto it if it is the connected control point to the one they are already guarding.  Taking out their pawns also helps this process but fighting the other players and maintaining captured control points are key.  This was my favorite mode because if your teammate is down and not executed you can go and revive them.  It really feels like a mode that fosters good teamwork and if you aren’t the best at combat your team will still appreciate the best healer.  Obviously, you can’t heal a player with no head, so players that are executed cannot be healed.

One of the best things about the battles is that they aren’t just for the heck of it.  You can find armor, patterns, symbols, and tattoos to customize your character.  Most importantly though wins and losses go towards holding sections in a Risk type style game map.  At the end of the tournament time the one with the most lands and point is declared the winning faction.

For Honor is a beautiful game with amazing graphics and audio on the PC with well-balanced classes and carefully developed combat styles.  Players who just like to run and smash and bash may not find this to be the game for them. Players that like to mix a bit of strategy with their fighting game and are comfortable working their way slowly through levels will find For Honor a great play they keep going back to.